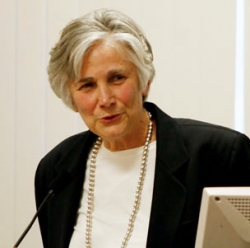 Diane Ravitch, author of The Death and Life of the Great American School System.

Ravitch spoke Thursday night before a crowd of more than 1,000 education professors, students, public school teachers, and community activists at the
University of Wisconsin.

"These corporate reformers are pursuing a strategy based on ideology, not on evidence," she charged. "It is demoralizing teachers and setting up public schools to be de-legitimized, as they are called upon to meet impossible goals. This is not an improvement strategy, it is a privatization strategy."

Ravitch, once assistant secretary of education under George W.
Bush, has undergone a remarkable transformation after observing how
the education system became fixated on test results, the scapegoating of teachers and the promoting of a privatized approach to education.

She has now emerged as one of the leading critics of the Obama-Duncan approach to public education, which has been driven by funding from several huge foundations--the Bill and Melinda Gates Foundation, the Eli and Edith Broad Foundation, and the Walton Family foundation.

The essence of this corporatized approach to public education is "choice, competition, deregulation, accountability, and data-based decision-making," as Joanne Barkan summarizes it an important Dissent article.

With progressive reforms for education generating little attention, the corporate model has managed to make surprising inroads among some  liberals who have become persuaded that a market-driven education system is key to America's future.

The corporate style of reform began with "No Child Left Behind" enacted under George W. Bush, which promoted a preoccupation with standardized testing and the conclusion that children's failure to measure up was a direct result of inferior teachers.

This was followed by Duncan's "Race to the Top" program which embraced the same core beliefs, including the closing of "failed schools." Duncan and Obama, for example, applauded the decision of the Central Falls, Rhode Island School Board to close the high school and fire all 91 staff members, absurdly including the cafeteria and maintenance staff, based on the assumption that low test scores reflected the failures of the teachers.

The poverty of the students and the fact that a high percentage were immigrants learning English were seen as irrelevant to the low test scores. Eventually, both Duncan and the local school system were forced to back off due to public outcry.

But Duncan, along with the three huge foundations, is still pressing ahead with imposing what Ravitch calls their "punitive" and "market-based" assumptions on the nation's schools.

However, as both Ravitch and Barkan have pointed out, all the major studies show that the key elements of corporate-style education reform are simply not working:

No improvement in learning: The most comprehensive study of de-regulated "charter" schools, conducted by conservative economists at Stanford University, examined education results among students at 2,400 charter schools nationally. They found 83% of charter schools perform either worse or no better than public schools.

Merit pay: The new wave of corporate reformers have argued that
merit pay is vital to incentivize" and reward better-performing teachers. But a 2010 Vanderbilt University study clearly demonstrated that merit pay does not generate higher standardized testing.

A National Research Council report, backing up numerous other studies, found that standardized test scores fail to effectively measure student learning  The main result observed by Ravitch has been the tendency of school curriculums to get narrower and narrower, focusing almost exclusively on "teaching to the test" in reading and math. Supposed "success" stories of market-based, mayor-driven "reform" in Chicago and New York quickly unraveled once newspapers began independently evaluating the test scores of students.

Nonetheless, the combined PR clout of the Gates, Broad, and Walton
foundations has generated a massive wave of favorable publicity for
their crusade against what Ravitch called "the Bad Teacher Syndrome. This included a cover story in Newsweek, a weeklong series on NBC that "celebrated privatization and scapegoating teachers," as Ravitch put it, and two segments of Oprah devoted to discussing Waiting for Superman, which  Ravitch called a badly-biased documentary.

All of these high-profile attacks on teachers, their unions, and union-won rights avoid the real causes of poor school performance. "Most of the nations that the US is comparing itself with have much lower rates of poverty among their children. It's 20% nationally here, and I know it's much higher in this community." (32 percent of children in Milwaukee are poor.)

"Poor performance is mostly due to poverty and racial isolation," Raitch said. Barkan further illuminated this point in Dissent:

The most recent results (2006) showed the following: students in US schools where the poverty rate was less than 10% rnked first in reading, first in cience, and third in math. But as the poverty rate rose till higher, students ranked lower and lower.

Twenty percent of all U.S. schools have poverty rates over 75%. The problem is not public schools; it is poverty.

And as dozens of studies have shown, the gap in cognitive, physical, and social development between children in poverty and middle-class children is set by age three.

The over-emphasis on testing, the targeting of teachers, the senseless closing of schools, and the substitution of a market model for the basic democratic right of public education are all generating an increasingly vocal backlash from both teachers and parents.

"Teachers are going to be marching on Washington D.C. July 28 to 30 to protest the 'testing and punishment' regime in education," Ravitch announced.

The top-down corporate-style reform championed by Obama and the billionaires threatens a further deterioration of education for poor kids, and is an imminent threat to America's democratic traditions, Ravitch concluded.