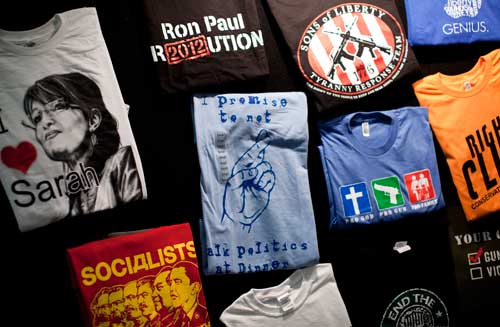 WASHINGTON, D.C.—Right-wing activists who gathered over the weekend for the annual Conservative Political Action Conference (CPAC) cheered a political climate that is increasingly hostile to public-sector unions.

Panelists on a Saturday morning panel called “Bleeding America Dry: The Threat of Public Sector Unions” pointed to Republican victories in state capitals across the country and to Democratic governors in New York and California who have vowed to fight labor. Most dramatically, the Republican governor of Wisconsin, Scott Walker, has called for radically limiting state employees’ collective bargaining rights, and says he is prepared to mobilize the National Guard to deal with disturbances.

“I think it’s okay right now to talk about unions and tell the truth about unions. And I think the public is starting to understand," said Tom McCabe, who led the Building Industry Association of Washington (BIAW) for two decades. The night before, McCabe received CPAC’s Ronald Reagan Award for his activism.  "It’s thanks, of course, to the think tanks on this panel...You can say stuff now in Washington, in New Jersey, any liberal state, that you could not say ten years ago.”

The campaign to shift the public perception of public-sector workers has in many ways been a success. The present moment is a perfect storm for an attack on public-sector unions: a conservative populism that encourages jealousy of unionized workers rather than anger toward business and Wall Street; nationwide shortfalls in pension funds thanks to under-funding during flush times and investment losses; and an economic crisis that has blown a hole through the middle of countless state and municipal budgets.

“You have to understand something,” Steve Malanga of the Manhattan Institute’s City Journal said at CPAC. “If we just stop and cure the pension problem, we have not gone far enough.”

As the situations in Wisconsin and New Jersey demonstrate, the right is moving not only to permanently curtail retirement benefits but to fundamentally curtail the power of unions. “We know who the enemy is,” Malanga said. “What we need in so much of public life is courage. I was very fortunate to work for a guy who personified courage. His name was Ronald Reagan.”

Reagan demonstrated that courage, of course, by firing all of the country’s air traffic controllers in 1981—the mention of which drew wild applause.

CPAC was all about being tough: on workers, on the poor, on the environment, and on crappy little countries that dare to mess with the United States (though the Ron Paul folks would take exception to that last one).

New Jersey Governor Chris Christie, an anti-union stalwart in a “blue” state, is the paragon. Interestingly, Christie was not present at CPAC.  I don’t think that is an accident. He excels at appealing to the right-wing base while presenting himself as a pragmatic, commonsense conservative to everyday voters. The fight against unions is part and parcel of a broader conservative assault on the tattered remains of the welfare state. In fact, it’s the linchpin.

“Everyone’s been talking about public-sector unions,” said Vincent Vernuccio, labor policy counsel at Competitive Enterprise Institute, a big-business think tank. “No. These are government sector unions. They are the main force that are fighting for bigger federal, bigger state, bigger local budgets. They are one of the main reasons for the bloated bureaucracy and deficits we’re seeing today. More government equals more workers equals more dues money for them.”

Community activists and advocates for the poor and uninsured are just a Trojan Horse for public-sector unions, inventing social problems out of whole cloth to line the pockets of bureaucrats. Malanga calls it “the big government coalition” of unions and “social service advocacy groups.”

“We happen to have in the White House today a former community activist,” he said, adding:

There was no discussion of the things that public sector workers do: educating children, picking up our trash, ensuring public safety. It’s the same for everything at CPAC: government programs are the problem. There is no acknowledgement of problems that are caused by anything but government or someone’s personal and moral failings.

Nor do they acknowledge the unique role that municipal unions have had in black economic advancement over the 70 years, providing an economic foothold long denied them in the private sector. With the disappearance of industry, public-sector jobs are some of the only good jobs left for working class people in American cities.

Conservatives are particularly thrilled to see Democratic pundits and politicians taking up the fight against labor. There was an entire panel dedicated to the documentary Waiting for Superman, which attacks traditional public schools as an intrinsic failure and touts charter schools as the sole solution. Superman, directed by An Inconvenient Truth director Davis Guggenheim, was panned by many education scholars. But for many conservatives, the film’s success was proof that conservative ideas can win ground on the left, especially when they’re dressed up as a story of poor people of color fighting for justice.

Breaking public-sector unions is a priority for the right as a whole—not only of business, but for conservatives of any stripe who want to defeat progressives at the ballot box or in government.

“I think everyone understands here that unions are the most important power on the other side of the political equation,” said Donald Devine, director of the U.S. Office of Personnel Management under Ronald Reagan. “Remember, Karl Marx said there are only three things necessary to overthrow capitalism: one, is the unions need to organize the masses; two, some of the businessmen...need to sell out...and thirdly intellectuals. And that’s still the three powers that are most important in fighting against the free constitutional society that we are all about.”

The entire conference is infused with an air of conservative martyrdom and belief in a world where the people on top are the ones who are always getting stepped on.

Someone in the audience asked if unions had threatened McCabe with violence. He said no, but that his “wife is good friends with some police officers in the Olympia Police Department. Because the union officials do come by our house frequently.”

A reporter from another news organization told me he thought it was the day’s most caustic panel. He was right—despite the fact that David Horowitz had just finished a speech in which he complimented the McCarthy-era House Un-American Activities Committee.

It was one point which the country's emboldened conservatives and embattled unionists can agree on.