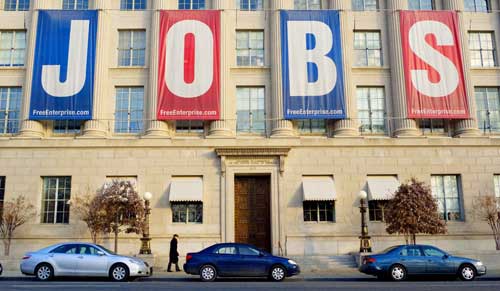 The Chamber of Commerce's Washington office has a clear message. But if jobs are all-important, why is Corporate America sitting on trillions in cash?   (MANDEL NGAN/AFP/Getty Images) )

On February 4, the Labor Department released its latest jobs report for the month of January. It showed a deep decline in net jobs created—only 36,000 last month, according to the Bureau of Labor Statistics (BLS).

This dismal job creation of the last three months followed last summer’s even worse jobs performance, during which job creation was negative for three consecutive months, from May through July 2010—a total of 391,000 jobs lost. Barely half of those jobs were ‘recovered’ from that summer slump. That ‘recovery,’ given last month’s mere 36,000 jobs, appears to be faltering even further once again.

The overall jobs picture for the past nine months has thus been one of renewed collapse in jobs, followed by stagnation in job creation. Together with the current double dip decline underway today in the housing market and the rapidly deepening fiscal crisis in state and local governments, the failure to generate a recovery in jobs represents the three great economic failures of the so-called current economic ‘recovery’—three great failures that the Obama administration still continues to inadequately address.

Following publication of the dismal January jobs report, in his weekly radio address Obama asked the nation's businesses to start creating jobs. After all, it had more than adequate funds to do so—i.e. more than $2 trillion in cash on hand it was hoarding.

Two days later, on February 7, Obama appeared before the U.S. Chamber of Commerce in its annual meeting in Washington D.C. and raised the same theme: Business should start creating jobs given its record level of cash. As Obama put it in his speech to the Chamber, it was time they “get into the game” of investing in the U.S. and creating jobs in America.  Business investing offshore instead of in the United State, Obama added, “breaks the social compact” and “makes people feel as if the game is fixed.”

The response of the attendees at the Chamber of Commerce event was not particularly warm. CEOs' remarks in the business press ranged from saying that merely hiring more workers won’t necessarily stimulate consumption, which is what was needed first. Other CEOs added they wanted still more deregulation, more tax cuts and reductions in Medicare and other entitlements to reduce the budget deficit before they would invest and create jobs.

In short, what they wanted was even more incentives and concessions from the Obama administration before they would “get in the game,” as Obama put it.

The other game plan

What Obama and his advisers apparently don’t understand is that the Chamber, and Big Business in America in general, are pursuing a ‘different game plan’ than Obama’s. They have no intention of committing any large part of their current $2 trillion cash hoard on investing and job creation in the U.S. The lion’s share of that $2 trillion is already pre-committed in corporate business plans today to other uses. Those other uses include a massive stock buyback program and dividend payout increases to enrich their major investors and senior managers, which is now just beginning to roll out.

Obama’s team should learn a lesson from recent U.S. economic history. Between 2002 and 2006, Corporate America embarked upon a similar record stock buyback-dividend payout game. During those years they disbursed $2.6 trillion in corporate retained earnings in buybacks and payouts. The buybacks-payouts were most timely, given the then-historic $3.4 trillion in Bush tax cuts introduced between 2001-2004 that primarily benefited investors.

Capital gains, dividends, inheritance, and other taxes were reduced dramatically for investors between 2002-2006. The record buybacks-payouts promptly followed. Their corporate benefactors quickly ‘passed through’ the $2.6 trillion to their investors and senior managers. Afterward, investment in new plant and equipment barely grew in the U.S. And it took 46 months, not until late 2004, for jobs just to recovery to levels that prevailed in January 2001.

Given the recent extension of the Bush tax cuts for another two years, the timing is now perfect once again for a repeat in 2011 of that multi-trillion dollar handout that occurred in 2002-2004. The timing is once again perfect for corporations to pass through trillions of dollars more, given its cash hoard of $2 trillion on hand, in stock buybacks, dividend increases, and offshore acquisitions. That is the corporate ‘gameplan’ for 2011—not Obama’s plea to invest in America and job create here.

It is Obama who is “not in the game” because Corporate America’s game is not the one he wants to play. They will ‘play,’ but only on their terms and according to their rules—not his. And if he doesn’t like it, then he can just take his ball and bat and go home. That’s the message of February 7. (And, oh yes, someone should also tell Obama and his team that the so-called ‘social compact’ he says corporations are risking by not creating jobs was broken at their initiation decades ago, under President Ronald Reagan or even earlier.)

The new age of 'concession bargaining'

What we are witnessing today is the extension of ‘concession bargaining’ that was introduced by Corporate America and its managers at the industrial level three decades ago. The result at the industrial level was stagnating weekly real earnings, loss of ten million manufacturing jobs, and a collapse of the union movement in the private sector from more than 20% to less than 7% of the workforce unionized today. The last remaining bastion of unionization, the public sector workers, are now firmly in the corporate-government crosshairs for a similar rollback in membership, earnings, and benefits.

What we are witnessing today is the expansion of concession bargaining from the industrial to a social-wide scale. We are entering a period of social programs and social benefits ‘concession bargaining’ on a grand scale. And Obama and governors or states are the ‘negotiators’ in charge of delivering the ‘sweetheart’ contracts that will lower the standard of living for the country's 100 million middle and working-class households.

The problem with job creation in the U.S. today is not that business has not been given sufficient incentives to create jobs or invest in the U.S. Quite the contrary, they’ve been given historically generous incentives and cash injections by the Obama administration in its first two years, with even more apparently planned.

(Just a few examples: the $400 billion in business tax cuts in Obama’s original 2009 stimulus package. Hundreds of billions of dollars more in additional tax cuts, accelerated depreciation write-off rules, direct corporate subsidies, and government subsidized low cost loans between June 2009 and December 2010. Add a further $400 billion more in the recent extension of the Bush tax cuts last December. And let’s not forget the biggest handout of all—the $9 trillion in zero rate loans extended to virtually all banks and financial institutions by the Federal Reserve over the 21 months between the collapse of the banking system in late 2008 and last summer.)

Without this historic handout and subsidization of Corporate America by the federal government, big business could never have accumulated the $2 trillion cash hoard it has on hand today. Obama’s original 2009 ‘gameplan’ was to bailout banks, businesses and investors in the expectation they would eventually create jobs, lower mortgage rates and adjust terms to save homeowners and boost state tax revenues again. But that did not occur and there is little sign, moreover, that it will in 2011.

The president's recent encounter with the U.S. Chamber of Commerce clearly reveals that Corporate America has already changed the game and left the field in the middle of the fifth inning, leaving Obama standing there alone with no one to pitch to.

The rest of us are wondering how we might get our money back.

Jack Rasmus is the author of ‘EPIC RECESSION: PRELUDE TO GLOBAL DEPRESSION, Pluto Press and Palgrave-Macmillan, May 2010; and the forthcoming book, OBAMA’s ECONOMY: RECOVERY FOR THE FEW, Pluto Press, 2011.