The Folly Of ‘Right to Work’ Legislation 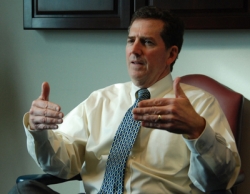 Studies show the laws have no effect on economic development, but are associated with lower wages, lower union membership

Labor groups have continued to mount pressure against Republican-led efforts to roll back collective bargaining rights. While much of the focus has centered on collective bargaining, many elected leaders have been expressing support for the “right to work” law as another legislative measure to curb labor’s influence in the workplace.

On Tuesday, Sen. Jim DeMint, joined by seven other Republican senators, introduced the "National Right to Work Act" as a way to reportedly boost the economy and raise wages.

The “right to work” legislation has been at the crux of the conflict in Indiana, where labor supporters are expected to gather this week to continue their protests against the assault on public-sector unions. Although the measure in Indiana has reportedly been withdrawn for now, the proposal has seemingly extended beyond the Heartland as other elected leaders are now considering the idea in their own state.

“Right to work” laws prohibit contracts that require workers to pay for union representation fees. In the United States, unions are mandated to represent workers in a bargaining unit for all workers. But “right to work” outlaws union fees for non-union workers within a union shop who still enjoy the benefits of collective representation.

Critics have pointed out that “right to work” is the latest Republican effort to trim union finances, and to a greater extent, their campaign contributions toward Democratic officials. It isn’t a coincidence that states with "right to work" laws have lower union membership rates either. Dean Baker, Co-Director of the Center for Economic and Policy Research, says the law is also a way to hinder labor’s survival. He writes:

The outcome is obvious; unions will have a much more difficult time staying in place, as many workers will take advantage of the opportunity to get all the benefits of union representation without paying for them. The unions that do survive will be much weaker if the government forces the union to represent people who don't have to pay for its services.

Recently, Indiana has been the most notable supporter of the legislation in their efforts to join the 22 states - mostly in the South and Southwest - that currently have “right to work” laws. In Indiana, the House committee voted in favor of sending the bill to the House even though Republican Governor Mitch Daniels backed off his support at the moment since it could hamper other proposals. But elected leaders in Missouri, Maine and even historically union-strong states like Pennsylvania have also expressed a desire to pass the bill.

Many of these state officials have supported the bill because it would apparently address budget concerns, spur businesses and create jobs. Several studies have found otherwise.

The 2009 study compared “right to work” states with those that don’t have the law. It found that states' right to work laws “yield little or no gain in employment and real economic growth,” according to the text excerpt provided by American Rights At Work, a workers' rights advocacy group.

More recent studies have found similar conclusions. In a recent briefing paper by the Economic Policy Institute, the nonprofit think-tank examined the case of Oklahoma which, in 2001, became the most recent state to adopt the law. The study said Oklahoma enacted the bill to draw manufacturing jobs, which had increased for a decade prior to the “right to work” bill. But employment in this sector fell after the state implemented the legislation, suggesting that the law’s impact on jobs was almost nil. The report also adds that the legislation did not have any positive impact on employment either:

The RTW law in Oklahoma did not buffer it from the country’s employment crisis in 2001-2003 or the Great Recession, either. Compared to the six states that border it, Oklahoma was no better off in terms of its unemployment rate or its rate of job growth in 2010 than it was in 2000, prior to enactment of its RTW law.

Finally, the number of out-of-state businesses opening plants in Oklahoma decreased following the adoption of RTW. Furthermore, more than 160 Oklahoma employers have announced mass layoffs and 100 facilities have closed since RTW was enacted.

This is just another tactic promoted by Republicans looking to reduce the bargaining and financial power of unions. For workers, job prospects with the so-called “right to work” aren’t as rosy as they might seem.