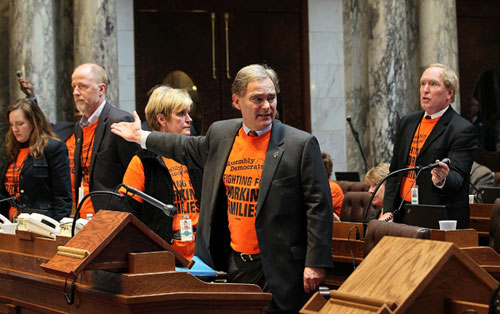 On Wednesday night, the Wisconsin State Senate abruptly passed a modified version a bill to strip public employees of collective bargaining rights. The Republican-controlled legislature is expected to pass the modified version this afternoon (Thursday). (See this site's live blogging from Madison here.)

But is that modified version—which Republican Senators were able to pass without a quorum because it wasn't part of a budget bill—legit?

Attorneys for Barca filed a complaint with the Dane County District Attorney's office on Thursday morning.

A staffer for Senate Majority Leader Scott Fitzgerald (R-Juneau) released a statement by Senate Chief Clerk Rob Marchant. Marchant's job is to give nonpartisan advice on parliamentary procedure. In his statement he maintains that no notice was necessary because the meeting took place as part of an emergency session. Marchant cites Senate Rule 93, which sets out rules for emergency sessions, but does not mention the open meetings law.

Senate Rule 93 (2) reads: "A notice of a committee meeting is not required other than posting on the legislative bulletin board, and a bulletin of committee hearings may not be published."

However, the open meetings law is equally clear:

Public notice of every meeting of a governmental body shall be given at least 24 hours prior to the commencement of such meeting unless for good cause such notice is impossible or impractical, in which case shorter notice may be given, but in no case may the notice be provided less than 2 hours in advance of the meeting.

Marchant is sidestepping Barca's charge. Marchant is saying that the state senate followed its own rules about advance notice before an emergency session. But Barca is alleging that the senate broke state law, not that it violated senate procedure.

Attorney Robert Dreps, an expert on state open meetings laws, told the Milwaukee Journal Sentinel that he did not believe that it was legal to hold a conference committee meeting on such short notice. The law allows for a mere 2 hours' notice if it is impossible or impractical to issue an alert sooner.

"I can't imagine how they can meet that standard," Drepps told the newspaper.

Of course, even if a violation occurred, the state's Republican senators might only have to pass the bill again (first out of committee, and then out of the Senate itself) with adequate notice. It might be only a small roadblock in the short term—but it could add more fuel to the recall fire that is continuing to burn around Wisonsin.