A Mumbai Slum’s Quest for Dignity 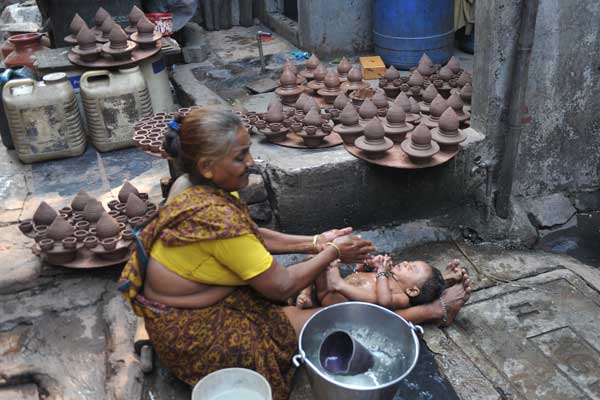 An Indian woman bathes her grandson at a pottery workshop area in the Dharavi slum colony in Mumbai on October 26, 2010.   (SAJJAD HUSSAIN/AFP/Getty Images)

MUMBAI, INDIA—In the breathless heat, Fahim Vora begins his tour of India’s largest slum with a plea to understand its other reality.

This sprawling slum of over a million, he says, is more than just a world of drunks and crime and desperation. The Dharavi slum, he says in an enthusiastic burst of numbers, is an economic dynamo, recycling most of Mumbai’s garbage, churning out most ot the city's leather goods and garments and stuffed with an endless seeming number of metal and chemical factories.

You are moved by this effort to offer dignity to a place where so little exists, where shacks made of chunks of thrown away metal and wood and plastic now spawl on top of older rickety shacks pushing the slum’s borders farther and wider. And you are touched by the enterprise of the 23-year-old college student, who lives in the slum, and who has set up this tour business to help him and others like him with their education.

There's a resilence here, a will to survive, to create, to earn today's bread in drenching sweat and bone-tiring exhaustion; a will to escape the dreaded poverty that is everywhere you look. You admire Vora's ambition and the workers he praises. But then you wonder about the other reality, the lives of the people who work here.

Workers, whose starting wage in the cramped, stifling workplaces, is about 25 cents a day. They are mostly villagers drawn from across India. Many sleep beside the machines where they work all day.

The people recycling plastics often work without gloves or masks, because some bosses don’t think they need them or they themselves think they can work without them. But they suffer for the lack of protections.

So do the factory workers, like a young man just down an alleyway who is doing some major soldering with only a hand-held mask against the sparks flying at him.

Down the next alley there are garment workers whose bodies are covered with the dyes that they use to color the clothes. They are nearly naked because they have to work in and out of the vats and because the heat is so suffocating in the workplace.

Just around the bend there’s nothing stopping someone’s hand from slipping into the presses that mash the leather. A youngster feeding leather into one of the presses in the small, dimly lit workshop looks to be in his early teens. He is sitting right next to the press.

You learn from a doctor with a constantly busy clinic in the slum that many of the chemical workers suffer from the fumes they breathe and many residents, whether workers or not, suffer from asthma and other breathing problems.

As you walk the alleys you realize that they are narrower than a doorway. If you stretch your arms out you can touch both sides of the alley. This is one reason why a fire recently raced so quickly through another Mumbai slum, wiping out all of the shacks. There was no way for firefighting equipment to pass through the alleys.

As you walk, you delicately balance between the animals, the heaps of garbage and refuse from the workshops and the wide open sewers.

Because if you slip, the sewer touches you like everyone else here.