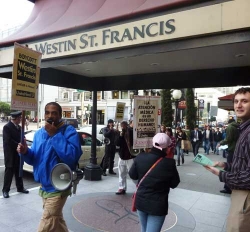 A boycott picket line of the St. Francis Hotel stands firm on March 16, even as former President Bill Clinton decided to speak at an event in the San Francisco hotel.   (Photo by Carl Finamore)

SAN FRANCISCO—Yesterday, former President Bill Clinton spoke at an event at the San Francisco Westin St. Francis, a hotel which is the subject of a worker-called boycott endorsed by UNITE-HERE Local 2, the San Francisco Labor Council, AFL-CIO, and by numerous political, religious and community organizations.

Clinton ignored the boycott, but could not avoid union members working inside, who confirmed he was present. The former president takes in upward of $350,000 each time he steps up to a podium, with $65 million in documented speaking fees since leaving office through 2009.

The Starwood Hotels and Resorts, managers of the Westin St. Francis, are not doing so bad financially either. According to the February 4, 2011 Wall Street Journal, Starwood’s revenue rose 7.5% last year to $1.34 billion. CEO Frits van Paasschen boasted that “by containing costs we are translating these higher revenues into higher profits….”

It’s not hard to figure out his business plan. His Local 2 employees average a modest $30,000 a year and yet Starwood wants to impose approximately $200 more in monthly health care costs.

Except for Clinton’s breach of solidarity, things had been going rather well the last week. Only a few days ago, the respected organization NARAL Pro-Choice for America pulled its luncheon from the Westin St. Francis to another union hotel not on the boycott list.

It was also in this same week that hotel workers overwhelmingly approved the breakthrough contract with the San Francisco Hilton, the first hotel to settle among 59 remaining in the 18-month labor dispute affecting over 8000 workers.

Yet, in the face of the Hilton settlement, Starwood broke off negotiations and “has shown no urgency to return. If Hilton can settle on a contract that respects its workers, why can’t Starwood?” asked Riddi Mehta, union spokeswoman.

“This makes solidarity even more important as we face off against a wealthy elite set of owners who want to make excessive profits off the backs of our members’ health care and retirement benefits,” she told me.

Marc Norton, a veteran hotel worker, added that he was “greatly disappointed that we see a former president come to our city, collect several hundred thousand dollars in speaking fees and leave town with his pockets full and his conscience empty.”

Marc himself is among two union activists fired in September by the small boutique Hotel Frank which is managed by Provenance Hotels. The Hotel abruptly announced in May 2010 that it was no longer recognizing the union contract that had been in effect for decades.

Workers were stunned when Provenance refused to continue their health care and retirement benefits. After hearing testimony from employees, the National Labor Relations Board is prosecuting the company for multiple violations of federal labor law.

Local 2 demonstrators on March 16 were also encircling the Hotel Frank, just around the corner from the Westin St. Francis picketing.

Just another day in the life of hotel workers in San Francisco, who continue to maintain a level of morale and resistance that surely caught the attention of one former U.S. president.