What We Haven’t Learned From the Triangle Shirtwaist Factory Fire 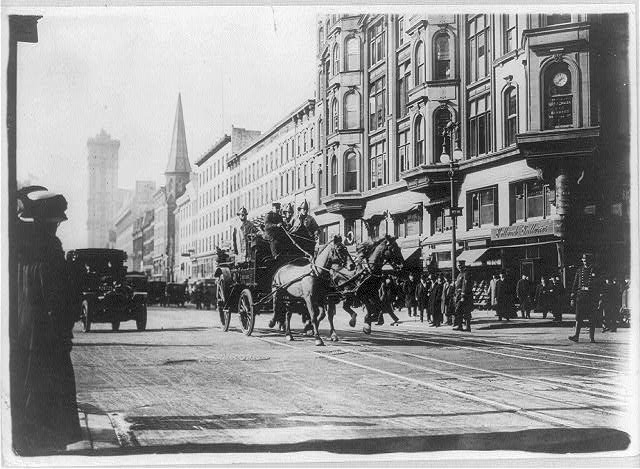 Many of the victims of the fire were trapped on the 8th floor of the factory, and jumped from windows to their deaths on sidewalks below. Crowds gathered from adjacent Washington Square Park as the tragedy unfolded.   (Library of Congress)

On March 25, 1911, 146 mostly young immigrant women died in a terrible factory fire in Manhattan. The tragedy, at the time the deadliest ever in New York City's history, changed America.

While the nation learned a valuable lesson from the fire, it was a lesson, frankly, it did not need to learn. At least not this way.

It was a Saturday, like many other work days, in a 60-plus hour work-week. Workers found themselves behind sewing machines, toiling for 12 hour days. They were charged for electricity, needles and any damages. The working conditions were, by any measure, subhuman.

The factory in question was notorious. The Triangle Shirtwaist Factory was the largest factory of women’s shirtwaists and blouses. During the 1909 strike, the Uprising of 20,000, Triangle resorted to violence, hiring thugs and prostitutes to viciously assault pickets. While almost all other shops in the industry settled with the union, the International Ladies Garment Workers Union, the owners of the Triangle factory refused.

Many wondered: If the strikers had been successful at Triangle, how many of those 146 might have survived? Many union members knew the answer, and demanded that their fellow workers not be forgotten, that they not die in vain.

Because of their demands, visible on the streets of New York as tens of thousands of workers participated in a mass funeral days after the fire, preasure mounted.

Those protests led the State’s political machine, Tammany Hall, to take notice. The Democratic Party, long in control of the state, passed legislation creating the Factory Investigating Commission. That commission, co-chaired by Al Smith and Robert Wagner, made recommendations to transform the state’s labor, building and fire codes. They investigated working conditions and workers’ safety and health.

Unlike many similar commissions, because Smith and Wagner controlled the state legislature, as Smith was Assembly Speaker and Wagner was majority leader of the Senate, they forced 36 of the recommendations into law. These laws made New York a model of progressive reform. These laws protected workers and gave unions a legislative friend in the urban Democrats.

The fire taught the city, state and the nation a lesson: that the state had a responsibility to protect workers and that an unchecked free market system might not be fully compatible with democracy. Frances Perkins, then a young social worker—soon to become chief investigator of the Commission and then Commissioner of Labor for New York and then Secretary of Labor—recalled the Triangle Fire as the starting point for New Deal.

But over 100 years later, have we forgotten the tragic lesson of the Triangle Fire? This year alone, 5,000 workers will loose their lives on the jobs. Many of these deaths are preventable, through better and more rigorous enforcement of current laws. Mine disasters, oil rig explosions and construction workers falling to their death are all too common. In postmortem investigations, we find that regulations were either inadequate or simply not enforced. We have slashed the budgets of regulatory agencies to the point that they can not function.

How many more workers need to die before we come to our senses? Do we need another Triangle Fire? I hope not. I hope that we can learn from history. So, on March 25, I hope you stop, remember and act on the lessons of the fire. 146 innocent workers died. Let’s not let them have died in vain.

Richard Greenwald, a historian, is the author of The Triangle Fire, the Protocols of Peace, and Industrial Democracy in Progressive Era New York (2005). He appears in Triangle Fire, a documentary which aired on PBS on February 28.