Do Workers with Criminal Backgrounds Deserve a Second Chance? 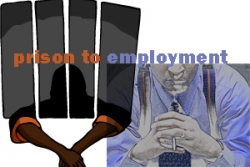 (Image via Ban the Box campaign, The Defenders Online)

The promise that 2011 will be a year of economic recovery rings hollow for the workers held back by their past. For many who’ve been in trouble with the law, not even a lifetime is enough to recover from a bad rap sheet.

A brand-new report by the National Employment Law Project shows that people with criminal backgrounds, even those who've paid their dues to the state, are unfairly shut out of employment opportunities and denied the second chance they need to overcome their past.

Today, about one in 100 adults in America are in the prison system. Prison releases have exceeded 700,000 per year, according to recent federal data . And many are headed for a job market where the vast majority of employers screen applicants for criminal histories. According to NELP, “more than one in four U.S. adults—roughly 65 million people—have an arrest or conviction that shows up in a routine criminal background check.” All that adds up to a dead end for people who have a criminal taint on their record.

In the midst of fierce competition for scarce jobs, a second chance is hard to come by for people with criminal backgrounds—which could range from an arrest for smoking a joint decades ago, to a more serious conviction for which a sentence has been fully served. NELP's research reveals that employers across the country routinely post job ads that include blanket clauses disqualifying applicants with criminal records. A compilation of online job listings includes phrases like, “You must not have any felony or misdemeanor convictions on your record. Period.”

But civil rights advocates aren’t letting biased employers get the last word. They have launched legal challenges against these exclusionary hiring policies under the framework of Title VII of the Civil Rights Act, which bars discrimination on the basis of race, gender and other protected categories. Since blacks and Latinos are historically overrepresented throughout the criminal justice system—in arrest rates as well as length of the sentence—advocates argue that the words “need not apply” in effect act as a structural barrier to opportunity in communities of color.

The downward spiral of exclusion and marginalization is intensified when the job market is increasingly under the grip of mega-companies. People seeking entry-level jobs in their communities may be completely at the mercy harsh screening policies at major employers like Radioshack, Aramark, and, that bastion of legal rectitude, Bank of America.

There are reasonable arguments for screening applicants for criminal histories, particularly if employers have workplace security concerns. Yet, as NELP points out, there is often little if any connection between a rap sheet and the personality, goals or capacities of the person behind it. A minor drug charge during one's youth may look like a glaring blight on an application form. But the employer who screens her out automatically will never hear the job-seeker explain in an interview how she's been sober,  steadily employed for the past ten years, or how the police record was erroneous in the first place and never corrected.

The data, in fact, shows that giving the benefit of the doubt to people with less-than-pristine records pays dividends for employee, employer and society as a whole. In the long run, NELP argues:

The irony is that employers’ attempts to safeguard the workplace are not only barring many people who pose little to no risk, but they also are compromising public safety. As studies have shown, providing individuals the opportunity for stable employment actually lowers crime recidivism rates and thus increases public safety.

A few progressive employment and training programs have emerged to address some of these barriers, but social services alone cannot make up for the economic toll of a criminal justice system aimed at punishment and not rehabilitation, much less helping people build a future from a rough past.

In addition to racial disparities, exclusionary policies may have special impacts on women struggling to to reintegrate into work and family life after prison. A 2008 study published by University of California-Berkeley School of Law examined the economic prospects of formerly incarcerated women and found hidden obstacles that prevent them from staying employed (and out of jail).

When you peel back the stigma of a criminal record, you'll find much more troubling histories underlying their struggles, including physical and sexual abuse, health problems, and the hardships of long-term separation from their children. Focus group studies with women in the Bay Area suggested that the social services and programs in their communities were inadequate for helping overcome these hurdles.

One of the lead researchers in the study, Monique Morris, told In These Times of how legal barriers to employment, coupled with misguided policies within prison, sometimes reach the height of absurdity:

According to the study's analysis of job applications showing a woman had done time versus those that didn't, “formerly incarcerated women were 31 percent less likely to receive a positive response from potential employers.”

The consequences go beyond the sting of rejection. When an unalterable stigma is combined with long-term unemployment, being permanently branded as a criminal can lead to crippling self-doubt, frustration, and in some cases, desperation that is deep enough to drive someone back into crime.