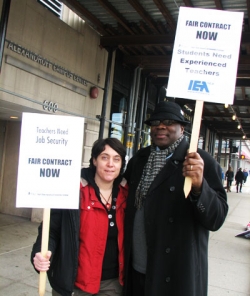 Union members and supporters picket, as negotiations with administrators continue

CHICAGO—Seven months after their contract expired, adjunct faculty at Columbia College in Chicago spent Friday negotiating with administrators they say have violated labor law and unfairly cut adjuncts’ teaching hours while replacing them with less-senior instructors.

Members of the P-Fac union and supporters picketed outside the college administration building as negotiations went on inside. P-Fac spokesperson Nancy Traver said pay isn’t the main issue for adjunct faculty, but rather job security and respect for adjuncts who in many cases have been teaching for a decade or more at the arts-oriented private college with multiple buildings in downtown Chicago.

Math teacher Susan Tyma has been at Columbia since 1997, and has twice been nominated for teacher of the year. She said one of her classes was cut 10 days before the start of this semester, and someone with five years less seniority was appointed to teach the class. “It definitely shows a lack of respect,” Tyma said. “And they claim they are making decisions in the interest of the students, but they never notified the students. They pulled a bait and switch on the students.”

Tyma also lost a class last semester, knocking down her expected annual pay by a third. Traver said the union has documented more than 100 senior adjuncts who lost teaching hours with short notice, in many cases replaced by less-senior adjuncts. The union charges class sizes have also been expanded in order to cut classes.

“The college is taking hours away from higher paid adjuncts and giving them to people with less experience,” said Traver, noting that entry level pay for a three-credit class is $2,000 per semester, while top-level is $4,700. “There are people who’ve been teaching here 20 years faithfully semester after semester, and then lost their classes.”

The National Labor Relations Board recently ruled in favor of the union on an unfair labor practices charge wherein a photography class was reduced from four to three credit hours, yet students and teachers still were expected to spend four hours a week in the classroom, according to Traver. A statement from vice president for academic affairs Louise Love said that the union has prioritized the photography department issue, which she said affects 11 union members, and hence derailed contract negotiations. Love’s statement also said that P-Fac has “sidetracked negotiations by raising non-contract personnel issues,” and that the union has canceled at least five negotiating sessions.

P-Fac has filed multiple complaints with the NLRB, including six headed to arbitration, charging retaliation, failure to bargain, unfair bargaining and interference with the union, regarding the contract process and separate issues. Traver said one of the charges is related to administration requests to reveal the names of adjuncts quoted in the union newsletter.

“People who have spoken out have had their classes taken away,” Traver said. Traver said administrators have told them that the percentage of classes taught by senior adjuncts is higher than ever. But Traver said they have little confidence in the numbers until the administration shows them the actual statistics. Columbia College like most institutions suffered declines in its endowment because of the economic crisis. But the endowment has recovered substantially, and the school recently purchased a new pricey downtown building.

“You see these attacks on collective bargaining at the state levels, and they say it’s a budget issue,” said P-Fac president Diana Vallera. “At this private institution there’s not a money issue, yet we’re seeing the same things happening.” Adjuncts from other Chicago colleges joined the P-Fac picket, describing the lack of security for adjuncts as a citywide – and a national – issue.

After more than a year of organizing, history professor Curtis Keyes Jr. noted that adjuncts at East-West University, another highly diverse downtown campus, will this semester take a unionization vote. As described on this blog last year, East-West adjuncts say the administration has run a vigorous anti-union campaign.

“We’re cautiously optimistic we’ll get a yes vote,” Keyes said. “If we don’t get a union, adjuncts will still be treated as second-class citizens.”