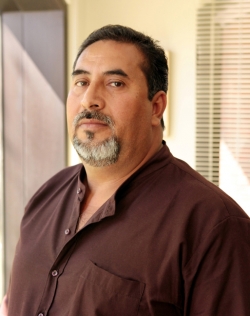 Francisco Piñeda is fighting for the water. For Piñeda and the rural communities of El Salvador, water is more valuable than gold. Rio Lempa is the country's longest river; some 4 million people rely on it to live and farm, as they have for centuries. In 2002, the Canadian company Pacific Rim acquired the rights to begin mining exploration for gold and silver in Cabañas.

Piñeda, a family farmer in El Salvador, was content growing his corn and enjoying his life as a small farmer with his family. He was thrust into the role of environmental leader when a group of villagers asked him to help them find out why their river was drying up. “We went to the river and saw that the water from this river was being siphoned by Pacific Rim for their gold exploration upstream,” he told In These Times.

Piñeda was in San Francisco this week to receive the prestigious Goldman Environmental Prize, the world’s largest prize for grassroots environmental activists. The Prize recognizes individuals for sustained and significant efforts to protect and enhance the natural environment, often at great personal risk, as this video explains:

Piñeda, who has a degree in sustainable agriculture, is the founder of Comité Ambiental de Cabañas (Environmental Committee of Cabañas), a community volunteer association of small farmers, environmentalists and community members.

The group started asking questions and educating other farmers about the health threats of mining. It’s common for mine operators to use cyanide, which eventually contaminates local water supplies. It changed the game for Pacific Rim. The company tried to entice Piñeda and the others with jobs and high pay.

The threats began. Calls came from supporters of the mine who are suspected to have ties to Pacific Rim. Someone offered the lady who works in the home of one of Piñeda’s relatives $2,000 to poison him.

Through their organizing, they built a people’s movement which has grown to include 26 communities and more than 450 members. They formed the National Anti-Mining Board. A great public outcry grew over mining exploration and in 2008, the Salvadoran government suspended Pacific Rim’s exploration permits.

The corporation wants to reopen the El Dorado gold mine, which stretches through Guatemala, Nicaragua and El Salvador in the municipality of Cabañas. Most people there make their living by farming and many fear the mining would contaminate their water and then end their ability to farm.

The report "Guns, Gold and Choice," written by Professor Richard Steiner, reviews the plans and effects of potential mining by Pacific Rim. In 2009 three anti-mining activists were murdered. One of Piñeda’s friends disappeared, Marcelo Rivera. "We found out he was assassinated and tortured. Another compañero, Ramiro Rivera (no relation) was attacked but recuperated. Then on Dec. 20, I get a call from Ramiro’s daughter and she says ‘We think they’ve killed my papá.’ He had two police officers protecting him.”

Accompanied by a priest, Piñeda went with the family to identify the body. “Three days before (his murder), we had had a meeting and he told us: ‘Look compañeros, one of us is going to die. But whoever remains standing has to continue to struggle.”

Six days after Ramiro was killed, someone murdered Dora Santos Sorto, wife of environmental activist Santos Rodriguez. The assassins had come for her husband and found her instead.

“She went with us to all the activities. She always had her small child in her arms. That day I was close to her house when we heard five gunshots.” Someone realized that Dora was by the river. “We took off down the road. When we got to the river, we saw her body, her 2-year old son at her side, and her unborn baby moving so much in her stomach. She was eight months pregnant,” said Piñeda tearfully.

New round of threats

Now there’s been a new round of threats against the Cabañas anti-mining movement. On January 11, community radio station Radio Victoria received a written death threat. The authors claim to be a death squad. There have been several other death threats against people.

Piñeda, who has 24-hour police protection, says, “it’s true that our comrades have died, and next it could be me. It could be someone else. But we know there is a mountain of others behind us. Mining in this country is a risk for all of us.”

Mining represents a great threat to El Salvador’s water supply. There are currently no metal-producing mines there. But the Central America Free Trade Agreement (CAFTA) has made it easier for foreign companies to do business there. Exploration permits have been issued for a variety of developments.

Pacific Rim is suing El Salvador for $100 million in lost investments and unrealized profits for not allowing it to mine, saying the country is breaking the  “investor rights” provision of the CAFTA. Since Canada is not part of CAFTA, Pacific Rim created a U.S. subsidiary for the purpose of filing a lawsuit. The case is expected to move forward this year.

It’s as if I visit the home of a friend in the U.S. and I and say, hey, “I’m going to take everything in your house.’ And you say ‘no,’ then I sue you because you said no. That is what the Free Trade Agreement is.

His children worry about him, but he tells them if he doesn’t continue to challenge the mining efforts, “what will happen to your generation? And your children? What will happen to them? What water will they have? What air will they have? So we have to fight. In El Salvador they say those of us who are environmental activists are crazy. I prefer to be called crazy rather than a traitor. Or, that I sold out my country.”

Human rights organizations have offered to relocate Piñero and the other activists in the United States. But Piñeda has no plans to leave his native country.

I am Salvadoran. Why am I going to allow a foreign company run me off? My family, and my compañeros have refused to leave. Why? It is our country. And we have defended it — as we did in the 80s, and if we did so then, why not now?

Us Salvadoreños are quite romantic when it comes to the question of our land and traditions. Ask any Salvadoran in any part of the country. We are in love with our country, our land and we will not allow this. Water is more important than gold.