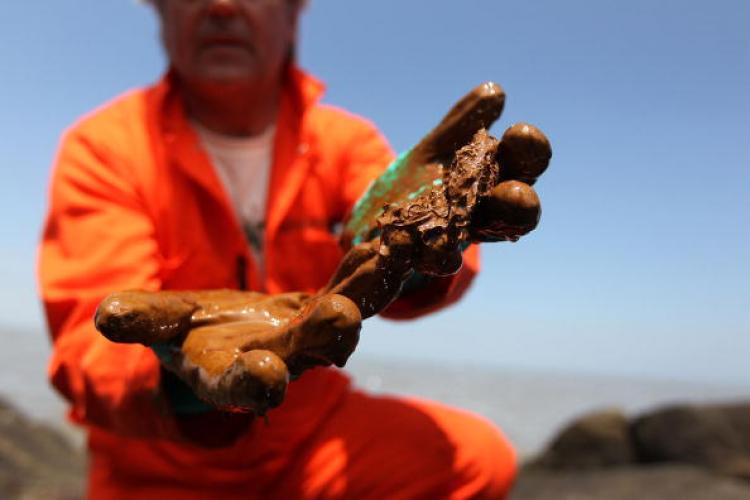 The April 14 meeting proceeded efficiently, as scheduled, for BP shareholders. For the workers, environmentalists and community members rallying in protest, though, the day of reckoning had yet to arrive.

The government and media may be moving on from the aftermath of the Deepwater disaster, but the scars left behind by the spill are still raw and festering.

First, Congress has passed no legislation to prevent the kind of disaster that touched off the explosion that killed 11 workers and poured masses of oil into the Gulf of Mexico. It was nearly a year ago that Rep. George Miller of California asked at a hearing:

These are inherently dangerous working conditions. Now there is a question whether a worker has the protection to say ‘stop’ in face of danger without fear of retaliation. That is a very serious problem if that right doesn’t exist in the law.

Despite congressional hearings, official investigations into what went wrong, and heightened attention to the oil industry's dirty deeds and culture of lax regulatory enforcement, there are so far no new laws that would prevent the catastrophe from repeating itself.

The scale of the disaster did spur some legislative action in both the House and Senate. A House bill that would strengthen occupational and environmental safety standards, tighten oversight and provide for environmental restoration has, according to Greenwire, stalled, stymied by opposition from many lawmakers to a provision that would have removed liability caps for offshore drilling companies. (A sore spot that has lingered since Exxon Mobil had its economic damages capped after its Alaska spill).

In the meantime, the Department of Interior has made overtures toward tightening regulation. But there remains an inherent tension between the thirst for oil and need for public protections, a conflict that folds into the “systemic” deficiencies plaguing the entire drilling process. As the expert commission's report revealed, responsibility for the tragedy extended all the way back to the federal bureaucracy's  “inadequacies in permitting and regulatory standards, practices, and oversight.”

There's still some hope that Congress willl act. New legislation involving varying degrees of compromise over the liability limit may resurface, including proposals to enhance regulatory oversight and to make the industry foot the bill for the cleanup.

But the more immediate problem involves potential health damages suffered by workers who are on the ground cleaning up the mess. Numerous reports emerged in the aftermath of the spill citing lax safety precautions and other hazards. Although federal agencies have sought to monitor the health of clean-up workers, questions linger about the long-term impacts of the chemical dispersants used to break up the oil and other contaminants. Tens of thousands of workers, including local fishermen who presumably were not professionally trained to handle extreme hazards, were dipped into a murky blend of toxins like benzene, Volatile Organic Compounds and sulfur dioxide. Reports of symptoms like dizziness and nausea emerged quickly after the clean-up began, and some local fishermen were reportedly discouraged from trying to use their own safety protections.

The health damages have yet to be tallied, and if the process for compensating workers for spill-related illness is anything like BP's controversial general claims process, there may never be justice for the people sickened in the aftermath of Big Oil's crimes.

And that brings us to the deepest injustice for which the corporations behind the Deepwater have yet to answer: the total devastation of the local economy, not just its oil extraction but fishing, tourism and all the other sectors nourished by the Gulf's waters.

So a full year's worth of outrage spilled out at the recent BP shareholder meeting. Union members demonstrated against the company's recklessness toward the environment and its workers. Gulf Coast activists tried to storm in to air their grievances but were shut out. Inside, it was business as usual: a recounting of the year's financial ups and downs, the resumed rhythm of pumping and drilling in the background.

It's only the local working people—the fishing families, the poor folks of color, the native communities—who remain paralyzed, mired in the painful realization that life on the Gulf Coast as they knew it will never return.