Democracy vs. Profit is Central Issue in Takeover of Benton Harbor, Mich. 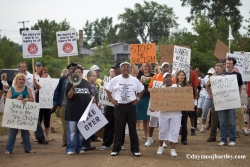 There is no place in the United States that more cruelly illustrates the intensifying conflict between corporate power and democracy than Benton Harbor, Mich., the first city to be placed under what some Michiganders call “financial martial law.”

In March, Michigan Gov. Rick Snyder won approval of Public Act 4 (i.e., the Emergency Manager law), which permits him to declare that a city is in fiscal crisis and then to appoint an overseer with unlimited powers including the elimination of existing union contracts. Significantly, chief sponsors of Public Act 4 were State Rep. Al Pscholka, who was a former aide to Whirlpool heir U.S. Rep. Fred Upton, and also "a former vice president for one of the major entities involved in building the luxury golf development," The Rachel Maddow Show reported last week.

One of the first battlegrounds in Benton Harbor is Jean Klock Park: Will the 90-acre park continue to be a public facility on Lake Michigan for poor kids or will it be converted into the massive proposed Harbor Shores golf course, condo and marina development?

Benton Harbor's population is 92% African-American and deeply impoverished by the de-industrialization of the city and surrounding area. Whirlpool’s recent plant shutdown is the most recent, crushing blow as the corporation continues to expand significantly in low-wage plants in Mexico, despite taking $19 million in federal recovery funds. Benton Harbor is plagued by the lowest per capita income in Michigan ($8,965), with 42.6 percent of the population living below the poverty line, including a majority of kids under age 18.

Like a set of other overwhelmingly poor and black cities whose economic hearts have been torn out by de-industrialization—such as East St. Louis, Ill., Gary, Ind., Chester, Pa.—Benton Harbor‘s plight was largely ignored by the state legislature (although past Democratic Gov. Jennifer Granholm staged a more limited intervention into the city's troubled finances, appointing Joseph Harris to be Emergency Financial Manager in early 2010).

This month Harris used the new powers granted to him by the newly passed law, declaring that elected bodies like the Benton Harbor City Council and School Board can meet but cannot make any decisions. The votes of elected bodies and Benton Harbor voters no longer count; the sole decider is Harris, who makes all decisions unilaterally.

Their goal is to virtually eliminate any forces that counter corporate domination of state and local government. “This is part of a national agenda,” said Rep. Dunhal. “It involves breaking the contracts of unions and interfering with the ability of cities to make their own decisions.“

MUCH OF STATE RIPE FOR TAKOVER

With Michigan already staggering from the effects of de-industrialization, the Great Recession hammered the state relentlessly with blow after blow. Every mass layoff caused by the recession means more job losses down the street and less tax revenue to cover rising social needs associated with rising hunger, homelessness, disappeaing healthcare coverage and increasing violence both within the home and on the street.

About 100 other cities, villages and townships are on the verge of fiscal collapse, along with 120 school districts, said Dunhal. Long-suffering Detroit is due for a $179 million cut in state aid thanks to Gov. Snyder, and it too looks vulnerable for a takeover.

Snyder is taking a step normally unthinkable for a Republican: He is raising taxes to the tune of $1.7 billion. But these tax increases are not designed to ease the pain of the recession or address the state's budget deficit. The tax increases will come at the expense of seniors who lose their property tax credits, the poor who are deprived of Earned Income Tax Credits, and people who want to make tax-deductible donation to public universities.

Incredibly, Snyder is also planning on handing out $1.8 billion to corporations in new tax cuts. While these corporate subsidies will be handed out in the name of “job creation,” a half century of using this approach nationally shows a pattern of abject failure when viewed from the national level.

"Success" in pirating a plant from another state comes at the expense of another region; the $70 billion annually spent on tax cuts and other incentives fail to secure long-term, high-wage employment from foot-loose corporatioins always on the hunt for a better deal; and the tax incentives drain state governments of revenues needed for schools and healthcare, as Greg LeRoy documents in The Great American Job Scam.

However, rather than take steps to address the fiscal crises breaking out all over the state, Snyder’s strategy will leave him in a position to take over more and more of the state’s cities and towns and school districts. He can thus fundamentally reshape Michigan through his appointees by breaking union contracts, substituting private voucher schools for public schools, sell off or lease public assets (e.g., parks, public buildings, power plants, etc.), and privatize water and power systems.

PARK FOR KIDS OR PRIVATE GOLF COURSE FOR ELITES?

One contentious issue in Benton Harbor is the fate of the Jean Klock Park, where developers want to complete the Harbor Shores development project. The land was originally given to Benton Harbor in 1917 by the Klock family in honor of their daughter who died at a very young age.

At the ceremony where the land was given over to the city, John Nellis Klock, the girl’s father, movingly made clear his intentions and those of his wife:

The giving of this park to the city of Benton Harbor has been to Mrs. Klock and myself, the happiest moment of our lives. The deed of this park in the courthouse of St. Joseph will live forever. Perhaps some of you do not own a foot of ground, remember then, that this is your park, it belongs to you. …The beach is yours, the drive is yours, the dunes are yours, all yours. It is not so much a gift from my wife and myself, it’s a gift from a little child. See to it that the park is the children's.

John Klock believed strongly, “There is little joy in piling up money that you do not need, and so the majority of my earnings have been spent in providing beaches, parks, churches and schools." But to Harbor Shores developers close to the Whirlpool Corp., the Klocks' dedication of the park appears to be merely an obstacle to their profits.

The developers have already gained 22 acres of the park to build a portion (three holes) of a 18-hole course designed by golf legend Jack Nicklaus, which opened in 2010. In exchange, Harbor Shores developers swapped land owned by Whirlpool that turned out to be highly contaminated; "taxpayers are now paying for the cleanup of that land through a brownfield redevelopment credit worth millions of dollars," according to a local blogger and activist.

Fortunately, the developers’ plan is being fought both in the courts and at the grassroots level by community and environmental groups. But the courts have seemed remarkably pliable in response to the developers' claims about proper public use of parkland.

'DISASTER CAPITALISM' AND 'THE SHOCK DOCTRINE'

Thus far, the Michigan martial-law plan closely follows Naomi Klein’s description of corporate elites’ practice of “disaster capitalism” as discussed in her superb book Shock Doctrine. When a disaster strikes—be it the 1973 military coup in Chile or the 2005 Katrina hurricane—it inevitably disorients and disorganizes a population. It creates an opportunity for corporate elites to rush in with plans for a new economic order that would never gain majority support if majority rule and democracy were functioning.

Rev. Jesse Jackson, who has been helping Benton Harbor organizations to resist the state takeover just as he aided workers in Wisconsin to fight against Scott Walker’s union-busting efforts, has called attention to Gov. Snyder's use of fiscal problems to justify terminating democracy in Benton Harbor:

There's nothing about the economic crisis that says we should decimate a democracy for a dictatorship. Tyrants often, in the name of emergency, will suspend democracy and seize control of all levels of the government.

This post has been updated with the following corrections: Harris was appointed Emergency Financial Manager by Democratic Gov. Jennifer Granholm in 2010, not by Gov. Snyder in 2011. Also, the golf course in question is open to the public and 18 holes; but only three holes of the course are in Benton Harbor's Jean Klock Park.