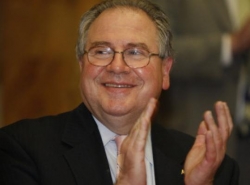 Robert A. DeLeo, speaker of the Massachusetts House of Representatives, did not strengthen his party's traditional alliance with organized labor this week.   (Photo via Massachusetts-election-2010.com)

Last night, the Massachusetts House of Representatives overwhelmingly passed a bill (111-42) to strip public-sector workers of their ability to bargain collectively for healthcare. The rhetoric surrounding the bill, proposed by Democratic State House Speaker Robert A. DeLeo, is in many ways similar to what Wisconsinites recently heard as Gov. Walker pushed his infamous unionbusting bill.

But how could a state in which Democrats control both the State House and the Governor’s mansion be pushing a bill that attacks workers’ rights to collectively bargain?

The State of Massachusetts currently faces a budget deficit of $1.9 billion. House Democrats say that by limiting the collective bargaining rights of public employees over healthcare they can save the state $100 million a year. Democrats in Massachusetts, much like Democrats in New York, have focused on cutting basic government services and workers’ wages instead of raising taxes on the richest. Thus, House Speaker DeLeo proposed the plan that would limit the rights of employees to collective bargain over healthcare. And many Democrats, who have been supported by labor unions in the state, passed it.

“We are going to fight this thing to the bitter end,’’ Robert J. Haynes, president of the Massachusetts AFL-CIO, told the Boston Globe last night.  “Massachusetts is not the place that takes collective bargaining away from public employees.’’

The plan, which now goes to the State Senate, gives local officials the ability of municipal governments to set copayments and deductibles for municipal workers. Only the amount of yearly premiums paid by workers would be on the negotiation table for public workers.

The big difference: The rhetoric is coming from a Democrat.

Many have framed the attacks on collective bargaining rights as a tactic for Republicans to eliminate the Democrats base. However, this simplifies who is attacking public employee unions. At the time when Obama called for a federal wage freeze in November, I wondered on this website whether it was Obama’s PATCO moment, which opened up the door for more attacks on public workers. (In 1981, President Ronald Reagan fired members of the Professional Air Traffic Controllers Organization en masse.)

While Democrats have been less brazen in their attacks on public employees' unions, they have still attacked public employees unions. Why is that? It's because it's often less politically risky for Demcorats weary of taking on the rich to go after unions than to call for higher taxes on the rich.