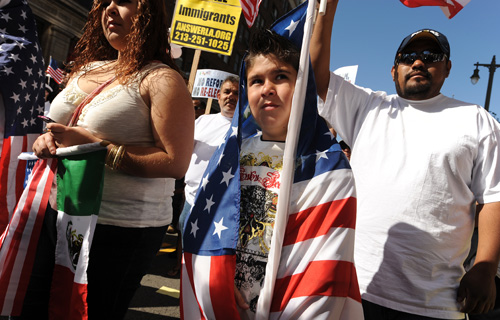 Immigrant rights activists march in the annual May Day rally in downtown Los Angeles on May 1, 2010.   (ROBYN BECK/AFP/Getty Images)

This May Day, the immigrant rights movement and the labor movement are joining forces for large rallies across the nation.

Five years ago, the massive crowds who turned out in support of immigrant rights and finding a path to citizenship surprised the nation. Those May Day marches were among the largest coordinated protests in U.S. history.

Now, with the labor movement itself under attack, an effort is underway to strengthen the alliances between immigrant rights and labor. Both Latinos and labor are under atack by right-wing forces. This year public-sector workers' collective bargaining rights have been rolled back in some states, and are being  challenged in others. Hate crimes and anti-immigrant rhetoric against Latinos have increased by 40 percent in the last five years.

With their falling membership numbers, unions need Latino workers in order to grow. By virtue of their enormous numbers in the service sector and the construction industry, their role is pivotal for bringing union numbers up. Latino immigrants possess one of the highest participation rates in the labor force: 70.8 percent.

The relationship is mutual. Latinos, among the most vulnerable workers, need the protections and benefits provided by unions. Union leadership has to reflect inclusion of minorities.

For much of its history, unions have opposed the loosening of immigration restrictions. Now leaders of labor groups are realizing that Latino workers could positively impact the future their unions.

The new report “Latino Workers in the United States 2011” by the Labor Council for Latin American Advancement (LCLAA), offers a critical analysis about the state of Latino and undocumented workers. (The report can be downloaded on LCLAA’s website.)

Latinos are the fastest growing segment of the U.S. workforce, which is now joining unions is at ‘near record lows.” The report says:

"If the U.S. economy is a many-colored fabric, then Latino workers are the foundational cross-threads on which the bright pattern is woven. Without their dependable presence in nearly every job, the U.S. economy would literally disintegrate. Yet these workers remain stubbornly invisible to mainstream media and to those with the power to enforce and change labor laws that could help protect them."

The future of America’s labor movement will be written in Spanish. Over the next twenty years, Latinos and Latinas will lead new fights for new rights all across this country. They will organize and mobilize a new generation of labor activists who will prevail over prejudice, corporate power and political foes. And they will change their communities and our country forever.

Hector E. Sanchez, executive director of LCLAA and the report’s main author, wrote: “…As we reflect on this historical evolution of social conditions and labor rights for workers, there is a serious contradiction today where millions of workers in the nation still lack access to any of the benefits that this movement brought. This is especially true for a particular group of workers — Latino and immigrant workers — a community that has been under constant attack from various fronts throughout this nation over the last several years.”

Enforcement-only policies have only enhanced that vulnerability to the point that immigrants have become disposable workers. It's a perfect system for exploitation, but we need to ask who is really benefiting from this, because so far everyone wants to blame undocumented workers. Eleven million immigrants living in the U.S. is not a mistake. This is public policy and the corporations and entire sectors of the economy are profiting from this broken system.

Many Latinos in the labor force have to endure unsafe or abusive working conditions to make ends meet. Latino workers also deal with more minimum-wage and overtime pay violations than any other ethnic group. More than 77 percent of Latinos surveyed in various minimum wage industries did not receive overtime pay with higher incidences among immigrants.

The bottom line: Thousands of working-class people, whether immigrants or not, unionized or not, are under attack across the board and they are beginning to understand their common links.

Organized labor has been on the front line defending the most vulnerable and exploited workers. As we celebrate May Day all over the world, this is the time to stand in solidarity with those that are under serious attack in this nation – our immigrant brothers and sisters.

The union movement must welcome these workers in a more aggressive way. Furthermore, Latinos and immigrants must embrace the labor movement as a tool for social protection and economic advancement. This is the future of our movement, but more importantly this is the future of a more just and a stronger nation. No one should allow the assault of labor, human or civil rights of any group. It’s just bad political, social and economic policy.