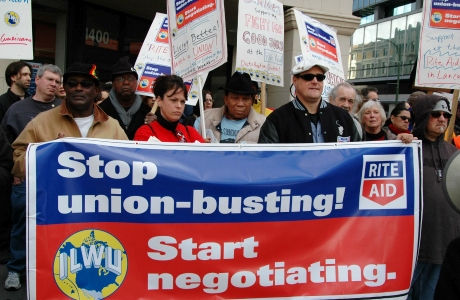 Rite Aid workers got their wish.

Rite Aid workers at the company's massive Southwest Distribution Center in Lancaster, Calif., declared victory on May 1 in their five-year effort to form a union and improve working conditions.

Workers signed a three-year tentative contract with management—subject to a May 12 membership ratification vote—that will improve conditions at the million-square-foot facility in California's high desert by guaranteeing:

"We're excited about winning this victory, even if it took longer than it should have," said Carlos "Chico" Rubio, a 10-year warehouse worker who helped negotiate the union contract with a team of eight co-workers.

Employees decided to form their union in March of 2006 after contacting the International Longshore and Warehouse Workers Union (ILWU). Within months, Local 26 President Luisa Gratz was helping workers address problems with indoor heat and production standards.

Responding to these challenges, Rite Aid workers stayed united and helped their union lead a sophisticated campaign that included:

"Rite Aid made this process much more difficult on workers and families than it needed to," said ILWU International Vice President Ray Familathe, who helped workers reach their May 1 settlement.

Rand Wilson is an AFL-CIO Communication Coordinator based in Boston, Mass., who has been directly involved with the Rite Aid' workers' campaign.