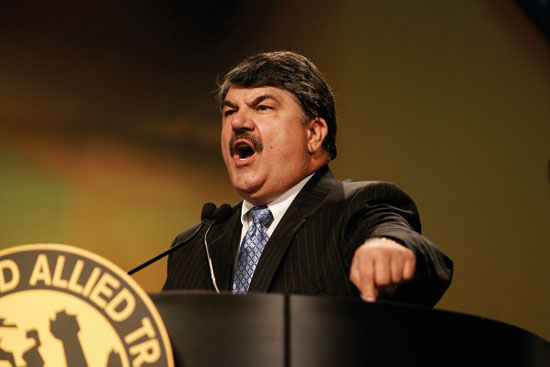 Last week, Salon Editor at Large Joan Walsh wrote a widely circulated article titled “Richard Trumka Declares Labor's Independence.” While I admire Joan Walsh’s willingness to cover labor issues (could it be because she used to work for In These Times?) and think the piece was well-intentioned, she failed to ask the tough questions about why the AFL-CIO president had failed to deliver on earlier promises of seeking political independence from a Democratic Party that has proven indifferent to the needs and goals of organized labor.

As a journalist who does not cover the day-to-day internal politics of unions as I do, I can see why Walsh would allow such a claim by Trumka to go unchallenged. But the truth is that Trumka’s talk of political independence is shallow and weak. Most labor leaders make the same speech about political independence every two years in the off-year before a congressional election. Then, when the election comes around, labor leaders often twist arms to get mortgages signed on their headquarters so they can give even more money to the Democratic Party in the final days before the vote.

You can find nearly identical quotes from AFL-CIO President George Meany in the 1960s during Johnson’s Democratic administration, from President Lane Kirkland in the late 1970s under Jimmy Carter, and from President John Sweeney in the 1990s under Bill Clinton. In fact, you can even go back two years before the last election to see Trumka saying labor might sit out the election. He ended up urging all union members to go out and vote for Democrats.

Reporters who do not cover labor regularly rarely have the memory or knowledge to remember labor leaders' litany of unfulfilled promises and challenge their bold new pronouncements  Initially, I fell for many of the same type of statements Trumka has made about making labor independent of the Democratic Party.

I'll admit it: I was a fan of Trumka’s from the beginning and wrote glowing reviews of his initial performances in making tough statements aimed at the Obama administration. The former coal miner is a very charismatic tough-talking figure, and many people mistake his tough talk for actual action when it matters—like in the months leading up to an election, as opposed to tough talk in the year before an election.

In the early stages of his administration (he was elected president of the labor federation in 2009), he seemed to be getting more aggressive with the Democratic Party. He showed it early in the financial reform debate when he went to capitol and denounced Barney Frank’s Wall Street reform proposal saying that it takes “the most problematic and unpopular aspects of the TARP and makes them the model for permanent legislation.”

At the time, I wrote that “It was a historical event; no AFL-CIO president in its history had even gone to testify against financial legislation. Not George Meany or Lance Kirkland, who were far more interested in fighting Communists overseas than they were in fighting big banks, or employers, for that matter.”

Trumka said that labor had not been “aggressive enough” in pushing the Employee Free Choice Act (EFCA), which would give workers the option to unionize via card check rather than elections. The AFL-CIO even backed a primary challenge to Blanche Lincoln after she failed to back EFCA. (Although it was the only primary against a Democrat opposed to labor interests last years, and many claim labor’s decision to primary her was made easy by polls that showed her already losing in a landslide in the general election.)

When Trumka’s decision to oppose something actually mattered, he dropped the tough talk and did whatever the Democratic Party asked of him. Trumka threatened that the AFL-CIO might not support the final healthcare reform if it did not include a public option, an employer mandate, and was free of tax on healthcare plans. The final healthcare bill failed to do any of those three things—indeed, the healthcare bill President Obama signed into law in early 2010 hurt union members whose benefits would be taxed under the plan.

Trumka not only supported the bill, but threatened Democrat lawmakers on the left who were on the fence about supporting the bill.

Then there were statements from the AFL-CIO president that the federation might sit out the 2010 midterm election. Such talk was quickly dismissed after President Obama made a flattering speech at the 2010 summer AFL-CIO Executive Council meeting. All of a sudden, labor leaders were in love with the president again. (It was a bizarre scene, the  mood of which I memorialized in “Obama–AFL-CIO Lovefest: Once Again, Labor Hopes President Will Prove Loyalty.”)

Soon, Trumka was twisting arms and pulling out all the stops to make sure Democrats had the money they needed to win in 2010 midterm election. He said it was "the most crucial election in 75 years." Despite Trumka being upset at the president over his tax cut proposal and the lack of emphasis on job creation, Trumka refused to criticize the Democratic Party in the lead up to the election.

I interviewed Trumka at the Oct. 2, 2010 One Nation Coming Together Rally and asked him about whether he would criticize the Democratic senators who blocked a vote on ending those tax cuts in his speech. He said: "No I won't, today is about America coming together. This is not a day for a politics." Later in his speech, Trumka would indeed talk politics, but only by urging rally participants to get out and vote for Democrats without denouncing any of their bad policies.

Sure, perhaps something changed after the big Madison, Wis., fight this year. Maybe it created new energy and has given the labor movement more ability to end its drug-like addiction to the Democratic Party.

If that's true, then why did the AFL-CIO gladly get behind a Democrat for governor in West Virginia who had put up roadblocks to granting public workers the right to collectively bargain? Former AFL-CIO Political Communications Director Eddie Vale sent out a tweet highlighting the AFL-CIO endorsement of Richard Thomspon, the current speaker of the West Virginia House of Delegates.

Despite being a state where all three branches of government are basically controlled by Democrats, West Virginia does not allow public employees to collectively bargain. As speaker of the house, Thompson had refused to even allow a vote for a bill that would have allowed collective bargaining rights for public employees. The AFL-CIO endorsement of Thompson outraged United Electrical workers union Political Action Director Chris Townsend, a non-AFL CIO union, which is the largest union representing state workers in West Virginia.

Similarly, AFL-CIO was mute in criticizing CEOs close to the president who continued to export jobs overseas. After a speech at the National Press Club, I asked Trumka if he was upset with Obama for meeting with some of the leading job exporters in the United States and not denouncing them. Trumka responded: “We aren’t going to denounce the president in public for meeting with the CEOs. The president doesn’t communicate well with me in the press. I talk in private with the president about these matters."

Sure, it sounds good when Trumka tells reporters like Joan Walsh that he is “declaring labor’s political independence.” But does that statement actually mean anything? Trumka says that instead of giving money directly to the Democratic Party, the AFL-CIO will spend money in-house during the elections—but that it will still spend the money to promote Democratic Party candidates.

The AFL-CIO has not talked of restarting the Labor Party experiment of the late 1990s, which several unions, including Trumka’s own the United Mine Workers, backed. Indeed, the labor movement has bowed to the wishes of the Democratic Party by not fostering electoral efforts like New York’s Working Families Party in other states that allow fusion balloting, such as Ohio.

Even Walsh notes in her Salon piece that Trumka “didn't spell out exactly what that might mean, citing decisions to be made by the federations governing Executive Council.” To quote a James Brown lyric: Richard Trumka is “talking loud and saying nothing.”