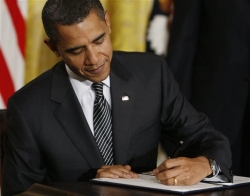 The presidential pen is mighty.

WASHINGTON, D.C.—Two weeks ago I ran into John Podesta, the former White House Chief of Staff (under Bill Clinton) who is now the head of the Center for American Progress, a progressive think tank. Podesta was very excited about news that the White House was drafting an executive order that would force contractors to disclose their political donations.

The order would require all corporations seeking a federal contract to disclose all of their federal political spending over $5,000 for the previous two years — including contributions to outside third party groups like the Chamber of Commerce, lobbyists and trade associations. Since 138,000 corporations do business with the federal government, it would bring in an unheralded level of transparency, revealing which companies are spending big to push anti-labor candidates and policies.

It was an example of the executive branch using the massive multi-billion dollar federal contracting process to force progressive changes. “We started fighting for these high road contracting rules under the Clinton Administration, and I am going to keep fighting for them,” a very excited John Podesta said.

The federal government currently has the power to limit what type of corporations receive contracts and state the conditions they must meet in order to receive those contracts, but it doesn’t.

In the last part of the Clinton administration, when Podesta was White House Chief of Staff, the government issued executive orders to implement "high road" contracting practices that would have enforced laws on the books barring companies that broke labor, safety, and environmental laws from receiving federal contracts. President Bill Clinton’s “contractor responsibility rule” would have created guidelines, a centralized database and data standards to prevent bad actor corporations from receiving government contracts. (The George W. Bush administration ended up blocking implementation of the orders.)

Despite laws that forbid companies who break the law from receiving government’s contracts, these laws are rarely enforced by the federal government. As I wrote in February, only a handful of major corporations that have committed major crimes have been suspended from receiving government contracts since the mid-1990s, according to testimony before Congress by the Project on Government Oversight: “General Electric (for a period of five days); now-defunct companies WorldCom, Enron and Arthur Anderson; Boeing (which received multiple waivers to receive new contracts during its suspension); and IBM (for a period of eight days in 2008).”

By updating the standards, databases, rules and guidelines for enforcing contracting rules about what corporations get the law, Obama could stop a wide range of anti-worker practices, from workplace safety rules to sexual harassment to unionbusting.

If President Obama signs this executive order forcing disclosure of corporations' political donations, the progressive movement should then hound him to sign a similar high-road contracting rule.With a stroke of his pen, he coud go a long way toward curtailing rampant unionbusting and workplace safety violations.