On the Border, Obama Pivots on Immigration, Wavers on Real Change 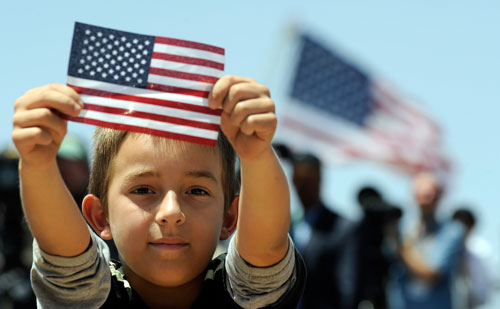 A boys shows off his country's flag as President Obama speaks on immigration in El Paso, Texas, May 10, 2011. There are an estimated 11 million foreign nationals living in the country illegally, most of them Hispanics.   (JEWEL SAMAD/AFP/Getty Images)

There's no time like the present for President Obama to tackle the challenge of fixing the country's broken immigration system—heading toward the 2012 campaign trail and coasting on his counter-terrorism victory lap. But after years of unfulfilled promises, is Obama finally feeling bold enough to challenge Republican hardliners on the issue proactively?

The proposals Obama outlined in his speech in the border city of El Paso, Texas, on Tuesday included nothing new, but he did signal that the White House might not retreat from the perennial third rail of American politics this year. You could consider that something of an achievement, in light of the explosion of rabid xenophobia and anti-immigrant legislation around the country.

So Obama gingerly picked some relatively low-hanging fruit on the border this week by floating another plan to forge a “legal pathway” for millions of undocumented immigrants. He threw in the boilerplate lines about demanding “responsibility” from those who entered the country illegally, including payment of back taxes and moving to the back of the “line for legalization.” He vowed to crack down on “unscrupulous businesses” who hire and exploit undocumented workers.

The subtext of this reform “blueprint” is that immigration is good business, and each immigrant counts as a potential economic asset, whether studying at Harvard or picking tomatoes:

The law should stop punishing innocent young people whose parents brought them here illegally and give those young men and women a chance to stay in this country if they serve in the military or pursue higher education.

A smart 21st century system should also provide farmers a legal way to hire the workers they rely on year after year, and it should improve procedures for employers who seek to hire foreign workers for jobs if U.S. workers are not available.

Such ideas have been criticized as “amnesty” by the right, and yet others are wary of inequities built into the legalization gauntlet for the poorest and most vulnerable immigrants and their communities.

First, what are the ethics of treating immigrants, and their basis for citizenship, as units of economic production? Sure, this country was built on the exploitation of cheap migrant labor for the past few centuries. Immigrant rights' advocates love to remind conservatives that we are a “nation of immigrants.” Yet this view inadvertently sanitizes the same labor system that brought us slavery and indentured servitude, not to mention gender and racial discrimination that we still have yet to overcome. The immigrant-as-economic-stimulus perspective, while certainly rooted in fact, is blind to the global context surrounding labor migration.

The freedom with which capital flows across borders is dangerously out of sync with the draconian, and typically ineffective, restraints that states place upon the freedom of movement.

The hardships experienced by economically driven migrants reflects the cruel arbitrage structure created by systemic impoverishment. The key players are employers (who hire immigrant workers), politicians (who benefit from immigrants' relatively low use of state resources, and high economic dividends for the private sector), and multinational corporations (who, unlike ordinary migrants, can navigate freely between societies to capitalize on vast disparities in wealth and labor costs).

This is the status quo within which Obama and the immigration rights movement must work, and it would be naïve to assume that any kind of reform could be accomplished in Washington without appealing to the base economic interests of people who don't much care for human rights or the wellfare of the so-called developing world. So daring to raise the issue of reform is at least a start.

On the other hand, the International Labour Organization has already gone much farther to fuse the principles of labor rights and human rights, as outlined in its book, “International labour migration: A rights-based approach”:

While the ILO's approach is neither flawless nor comprehensive, it does say what Obama does not dare to: that it is possible for human rights to form the core of labor, economic and immigration policy; this approach articulates the need to revisit the meaning of national boundaries and to foster cooperation among the countries that send, receive and serve as intermediaries for the millions who leave home in search for a better life. A rights-based framework focuses on protection, survival and decent treatment as a baseline, rather than a hindrance or an afterthought, in the pursuit of economic growth.

The business of immigration is also the business of enforcement. Obama's approach would preserve the enforcement regime that has undermined constitutional protections and separated families through deportation. Prioritizing enforcement also encourages further criminalization of immigrants through the racial profiling policies that have mushroomed on the state level, and give cover to the jingoistic brutality of characters like infamous Arizona Sheriff Joe Arpaio.

While Obama's blueprint promises to ramp up the policing of employers, the NNIRR counters in a recent report that even “reformed” enforcement practices lead to mistreatment of the most vulnerable:

And while Obama has placed “border security” as a central plank of his reform plan, the border patrol system has ended up criminalizing and even killing the very people the White House now says it wants to "bring out of the shadows." Thus the NNIRR has called for a “roll back and end to the militarization of immigration control and border communities” not in order to flout the rule of law, but because no “nation of laws” should be allowed to devalue human life.

Obama's approach is certainly not visionary. But it opens a space for others to be--especially grassroots efforts to organize and empower immigrant workers. The El Paso speech was the cue for the immigrant rights movement to rise up from the audience and call for changes that serve more than just business interests.

Could the immigration debate go from being a non-starter in Congress to a touchstone for other national conservations about the way we separate the “deserving” from the “undeserving” poor, the way the country stratifies opportunity not only by immigration status but by gender, race, age, education level and geography?

One promising note Obama raised in El Paso was his claim that the government is shifting away from the deportation of youth and families, particularly college-bound undocumented immigrants who have been waiting for relief from Washington. There is a sense that the White House can pivot the moral tipping point at which shortsighted line of arbitrary laws yields to a more expansive horizon of justice and empathy.

As Obama angles for the “immigrant” vote, those pushing for a real turning point on immigration shouldn't give up until all, not just the so-called “deserving,” can cross that threshold.