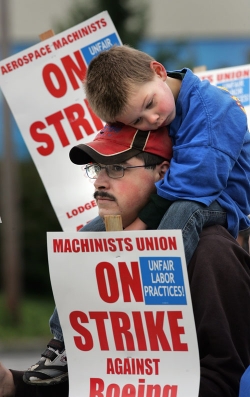 Speaking yesterday on Meet the Press, Republican presidential candidate and former Speaker of the House Newt Gingrich (R-Ga.) said that "the Obama system of the National Labor Relations Board (NLRB) is basically breaking the law to try to punish Boeing and to threaten every right-to-work state."

While Meet the Press host David Gregory vigorously challanged Newt Ginrgrich on details of his personal life, he failed to challenge Gingrich on his false assertion that the NLRB was breaking the law by finding that Boeing punished workers for striking in Washington state by moving a planned new production line there to nonunion South Carolina. Despite the NLRB complaint against Boeing being one of the most high-profile NLRB cases in decades and entirely consistent with past legal precedent, Gregory failed to say anything.

Indeed, many legal scholars have said that the complaint brought against Boeing is entirely legal. For those unfamiliar with the Boeing Case, the whole controversy started when Boeing decided to not open a planned production line at a union facility in Puget Sound after workers went on strike in 2008. In 2007, Boeing announced it would create a second production line to produce three 787 Dreamliner planes a month in the Puget Sound, in addition to the production that was already occurring in Puget Sound.

Then in October 2009, it was announced the company would move the second production line to a nonunion plant in South Carolina. Later, a Boeing official told the Seattle Times that Boeing moved the plant because of the strike and the union presence in Puget Sound.

Last month, NLRB General Counsel Lafe Solomon ruled that the decision to move production to a nonunion facility after a strike violates the ability to strike and collectively bargain enshrined in the National Labor Relations Act. This ruling stands in precedent with a long history of legal cases showing that threatening to move facilities if workers strike is illegal under the National Labor Relations Act.

Labor law professor James J. Brudney, the Newton D. Baker-Baker & Hostetler Chair in Law at Ohio State University's Moritz College of Law recently told Media Matters, "Relocating work away from a plant because of too much lawful union activity would be a classic violation of 8(a)(3)" of the National Labor Relations Act, which makes it illegal for employers "to discriminat[e] in regard to hire or tenure of employment or any term or condition of employment to encourage or discourage membership in any labor organization."

The 1965 Supreme Court case of Textile Workers Union v. Darlington Manufacturing established that a company could not partially close a factory and move work elsewhere in order to punish a union. Doing so was illegal under this Supreme Court precedent.