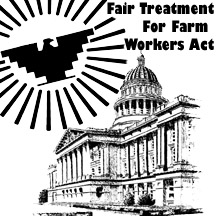 SACRAMENTO—On Monday, May 16—the third anniversary of the death of 17-year-old Maria Isavel Vasquez Jimenez—hundreds of farm workers descended on Sacramento to witness the California state Assembly vote on SB 104, the Fair Treatment for Farm Workers Act.

Vasquez Jimenez, who was pregnant, collapsed from heat exhaustion in 2008 in a San Joaquin county vineyard after working more than nine hours without accessible shade or water in nearly triple-digit heat. State authorities determined that her body temperature was 108 F before she collapsed and died two days later. Two supervisors were charged with involuntary manslaughter, but they only received community service and probation after striking a plea deal with prosecutors.

The Assembly voted for the Fair Treatment for Farm Workers Act—which passed the state Senate on March 31, Cesar Chavez's birthday—on a party vote of 51-26. Authored by state Senate leader Darrell Steinberg (D-Sacramento) and sponsored by the United Farm Workers (UFW) Union, the bill allows farm workers, as an alternative, to unionize via petition cards and thus avoid the anti-union threats employers opposed to unions often make.

Right now farm workers can only choose collective bargaining representation by a secret ballot vote at a polling place usually located at the work site. S.B. 104 would allow agricultural workers the option of voting for a union by signing a petition away from the work site. In other words, California's farm workers may soon enjoy the freedom to unionize that the moribund Employee Free Choice Act would have offered to all private-sector U.S. workers had it passed Congress.

The petition would be submitted to the Agricultural Labor Relations Board, accompanied by representation ballots signed by a majority of the bargaining unit.

The UFW said that some employers took advantage of the fact that the voting was at the work site and exerted pressure on the workers. With this system, workers can request a ballot and express their intention to belong to a union.

Provisions of the bill would also stiffen penalties for employers who try to deter efforts of farm workers to unionize.

Before the vote, hundreds of farm workers gathered in a nearby church hall where they rallied in support of the bill and shared lunch.

“SB104 will give agricultural workers the tools to ensure dignity and respect in the fields,” said Doroteo Jimenez, Maria Isavel’s uncle, who for the past three years has been fighting for justice for his niece. He told the crowd of workers, “We don’t want what happened to my niece to happen to others. We want to change the lives of people and change the system with this law to help others."

That is why we stand in support and solidarity with the UFW today in order to pass this law to help farm workers across the state.

The bill, opposed by the state's powerful agricultural industry, now heads to the desk of Gov. Jerry Brown.