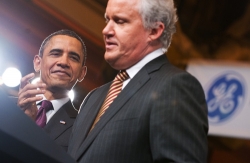 Next to Republican governors like Ohio’s John Kasich and Wisconsin’s Scott Walker, it would be very easy for Democrats to look more sympathetic to union rights, the needs of working people and the ever-shrinking middle class.

The Democrats lost 63 House seats and six Senate seats in the 2010 mid-terms in the industrial midwest as key Democratic constituencies stayed home. Now would seem to be a great opportunity for the Democrats to rebuild their relationship with unions and their supporters in the insecure middle class.

The party could seize this opening by promoting an agenda stressing the creation of public jobs via desperately-needed infrastructure re-building and that the privileged top 2 percent of corporations ought to bear a fair share of the tax burden needed to maintain services and balance state budgets. The agenda's premise: The primary victims of the recession should not suffer more due to cuts in services they desperately need (e.g., education, healthcare).

But once again displaying their unique talent for alienating their base, Democratic governors in a host of states are moving in the opposite direction.

While loudly proclaiming their distance from the blatant arm-twisting methods of Walker, Kasich and company, these governors are busy resolving budget crises in terms that will not even slightly inconvenience the fortunes of the super-rich and corporations, both of which have emerged from the Great Recession with a bigger share of income and record profits.

Instead, numerous Democrats are trying to fill budget gaps by demanding extensive concessions from their public employees, along with higher fees and service cutbacks. Shamus Cook in Truthout has compiled a “short list” of states where Democratic governors are pressuring public unions to accept diminished legal rights and/or swallow massive contract concessions.

Forgetting the explosion in Wisconsin, these Democratic leaders doubtless imagine that they are following this road because they believe it to be "the line of least resistance” compared with what they would expect from taxing the rich and corporations. The list of governors pursuing this path include those of:

By distancing themselves rhetorically from the heavy-handed tactics of Walker and Kasich, these Democratic governors may imagine they are showing how they are different from Republican attacks on the poor and middle class.

But the distinction is likely to be lost on Democratic constituencies in both the public and private sectors who have been suffering massive pay cuts and the loss of vital public services. As Cook observes:

The Democrats in the states listed above all hide their anti-union attacks behind a "deep respect for collective bargaining," a position akin to that of a thief who will steal your car but, out of respect, will not target your deceased grandmother's diamond earrings.

But by Election Day 2012, is the Democrats’ polite “pro-union” arm-twisting likely to look like a real alternative to the Republicans’ plan for making those at the bottom pay for the economic catastrophe caused by their reckless gambling on Wall Street and outsourcing of jobs?

CONNECTICUT YANKING: 'WITHOUT FIREWORKS OR ANGER'

In Connecticut, the situation is particularly egregious given the state’s wealth, low taxes on corporations and the wealthy, and the massive scale of the cuts demanded from public workers.

The position of Gov. Dannel Malloy is particularly self-delusional and distressing. Malloy has pressured state-employee unions for $1.6 billion in concessions to combat the state’s estimated $3.5 billion deficit, boasting that the tentative deal is "historic because of the way we achieved it - we respected the collective bargaining process and we respected each other, negotiating in good faith, without fireworks and without anger."

Not only is Malloy moving Connecticut forward “without fireworks and without anger,” but he is also doing so without any sign of disrespect to corporations and the investor class by raising their taxes.

Connecticut is well-known as one of the nation’s most affluent states. Less well-known is the profound inequality of its tax structure, which Malloy has chosen to essentially leave intact, as children’s advocate Joachim Hero notes:

It is the lowest-income people for whom taxes cost more. If you make $121,000 a year or less — about 80 percent of us — on average 9.6 percent or more of that goes to taxes. But if you make more than $1.4 million a year, state and local taxes in Connecticut come to 4.9 percent of your yearly income, according to an analysis by the Instiute on Taxe and Economic Policy.

Malloy has raised the top income rate slightly, “but it is still about two percentage points below the top rates of New York and New Jersey.”

Fairfield, Connecticut happens to be the home base of General Electric, which famously wound up paying no federal income taxes on $14.2 billion in profits, and in fact walked away with $3.2 billion in tax credits. In a speech full of unintended irony, GE CEO Jeffrey Immelt declared in March that the U.S. tax system is:

old, complex and uncompetitive. The purpose of a tax code should be that everyone pays their fair share, including GE. But it should also promote jobs and competitiveness and does the opposite.

Yet Malloy and fellow Democrats have chosen not to isolate GE as the poster child for destroying American jobs even while it exploits our federal and state tax structures.

Instead, Democratic governors are pursuing—but respectfully, mind you— concessions from public employees who have been a crucial part of the Democratic base.

It’s hard to see how a strategy of punishing the Democrats’ staunchest allies and rewarding the leading destroyers of our economic base is a winning strategy to both heal the economy and win elections.