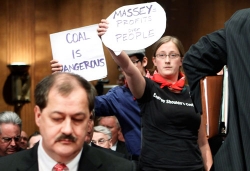 A family comforts each other during a candlelight vigil April 10, 2010, in Montocal, W.Va., following the deadly mine explosion.   (Photo by MARK WILSON/AFP/Getty Images)

The new independent state report on the horrific disaster at Massey Energy’s nonunion Upper Big Branch mine in West Virginia on April 5, 2010, is a sober but searing indictment of the company’s merciless drive for profits at the expense of worker safety. Twenty-nine miners died.

Led by J. Davitt McAteer, former director of the federal Mine Health and Safety Administration, the investigation and report also traces how Massey became a corporation “too big to regulate” by politicians in small, impoverished states like West Virginia. The report shows in grotesque detail a corporate-dominated political system that enthroned Massey and the coal industry while systematically enfeebling federal and state regulators.

However, regulators had backed off from exercising the full extent of the limited powers that law provided, as the report details. “The disaster at the Upper Big Branch Mine is proof positive that the [federal Mine Safety and Health Administration] failed its duty as the watchdog for coal miner,” the report states.

The most central finding of the McAteer report is straightforward:

The disaster at Upper Big Branch was man-made and could have been prevented had Massey Energy followed basic, well-tested and historically proven safety procedures….Massey exhibited a corporate mentality that placed the drive to produce coal above worker safety.

The causes of the disaster were the conscious neglect of the most rudimentary safety procedures by Massey executives, headed up by former Massey CEO Don Blankenship, who was among 18 Massey officials who pleaded the Fifth Amendment rather than testify (one Massey executive has been indicted for lying under oath.)

While ignoring basic safety measures and keeping fraudulent records, Massey’s obsession with the bottom line was reflected in its demands production reports every half-hour.

In this profit-fixated underground world shaped by the dictates of Blankenship and other Massey executives, the corporation was able to impose what the McAteer report called “the normalization of deviance”:

Most objective observers would find it unacceptable for workers to slog through neck-deep water or be subjected to constant tinkering with the ventilation system – their very lifeline in an underground mine.

Practices such as these can only exist in a workplace where the deviant has become normal, and evidence suggests that a great number of deviant practices became normalized at the Upper Big Branch mine.

Although Massey defeated a 1984 United Mineworkers strike which “marked the first time in 60 years that a coal company had brought in strikebreakers and armed guards," as McAteer notes, the defeat failed to snuff out the flames of worker resentment over their treatment.

Believing (quite correctly, as a new study by the National Institute on Safety and Health shows) that unionized mines have far safer conditions, Upper Big Branch workers staged three unionization drives, obtaining the signatures of 65-70% of the miners on union authorization cards calling for an election.

But Blankenship used the illegal threat of closing down the mine in retribution if the workers voted for the Mineworkers.

Massey’s the reverence for profits and utter disregard for workers’ safety and rights was characteristic of all of Massey’s mines, the McAteer report documents:

American University’s (AU) School of Communications released a detailed study of Massey’s safety record conducted by its Investigative Reporting Workshop. The study, based on a careful search of available data from public sources, including MSHA’s on-line database, concluded that from 2000 to 2010, no United States coal company had a worse fatality record than Massey Energy.

Fifty-four workers were killed in Massey mines during that time, including the 29 who lost their lives in the April 5 explosion and two who died at other mines after the explosion.

Despite this record, Massey was able to keep operating like a feudal kingdom, contemptuous of regulations and regulators but highly skilled at evading the most severe sanctions and in manipulating politicians to prevent regulatory structures from cramping its style.

For example, something as fundamental as clean, fresh air and proper ventilation were a persistent problem at Upper Big Branch, resulting in appalling levels of eventually-disabling “black lung” disease:

Seventeen of the 24 victims’ autopsies (or 71 percent) had CWP [Coal workers’ pneumoconiosis, the technical term for “black lung”]. This compares with the national prevalence rate for CWP among active underground miners in the U.S. is 3.2 percent, and the rate in West Virginia is 7.6 percent.

Massey essentially combined 19th century labor relations and safety standards with 21st-century public-relations and political power. Workers labored under atrocious, primitive conditions far out of sight underneath the earth’s surface, while Massey projected an image of being caring and compassionate corporation.

As the McAteer report notes:

The company is acknowledged for the number of jobs it provides and for such contributions as bringing doctors to coalfield communities; providing financial assistance to coalfield schools and scholarships for students; supporting volunteer fire departments and sports events; and staging an annual Christmas gift-giving program for needy children.

But there are limits to what even the cleverest gestures can generate in terms of winning over public sentiment, as the report observes:

Massey is equally well-known for causing incalculable damage to mountains, streams and air in the coalfields; creating health risks for coalfield residents by polluting streams, injecting slurry into the ground and failing to control coal waste dams and dust emissions from processing plants; using vast amounts of money to influence the political system; and battling government regulation regarding safety in the coal mines and environmental safeguards for communities.

As the largest coal producer in Central Appalachia, Massey was able to use its immense political clout—massive campaign contributions, lobbyists, and threats of closing down mines—to marginalize community opposition, crush labor organizing efforts, and intimidate conscientious regulators. The McAteer report explains how such power is exerted in West Virginia:

While the chain of command for the federal Mine Safety and Health Administration extends away from West Virginia toward the nation’s capital, the chain of command for West Virginia state inspectors leads directly into the governor’s office. A mine operator who is unhappy with an inspector’s actions has only to pick up the phone and call any one of a number of state officials or the governor.

Not even the supposedly impartial courts were immune from Massey’s reach. After the West Virginia State Supreme Court in 2004 ruled against Massey in a $50 million judgment for driving the Caperton Coal Co. out of business, Blankenship struck back:

In that year’s general election, Blankenship spent more than $3 million of his own money to unseat State Supreme Court Justice Warren McGraw and replace him with a judge more sympathetic to Massey’s interests.

Through the political action group, “And for the Sake of the Kids,” Blankenship financed a media campaign that portrayed the progressive McGraw as a dangerous radical who was soft on sex offenders.

The defeat of McGraw gave Blankenship two close allies (one of whom he was later photographed with in 2006 while vacationing on the French Riviera) on the Supreme Court, and the $50 million judgment against Massey was overturned.

The result was that a routine flare-up of methane gas turned into a massive explosion and inferno spreading throughout the sprawling, two-mile long mine:

Small methane ignitions do not have to turn into major explosions if mine operators adhere to basic safety measures, such as maintaining adequate ventilation systems, removing explosive coal dust from mining operations, spreading required amounts of rock dust and ensuring that water sprays on mining equipment are kept in good repair and function properly.

Because these basic safety systems failed at [the Upper Big Branch mine], a minor flare-up of methane led to the nation’s worst coal mining disaster in 40 years.

One year later, Massey has been taken over by a company called Alpha Natural Resources and the lightning-rod figure of Don Blankenship is gone. But strong new mine-safety legislation remains stalled by Republicans, perhaps requiring another horrific disaster before it can pass.

The federal Mine Safety Agency has toughened its inspections and enforcement, while mineowners remain resistant to anything interfering with the steady stream of profits.

Still, it remains to be seen if the Obama Administration and West Virginia officials are willing to file criminal charges against almost-deified “job creators” like Don Blankenship who recklessly and knowingly sacrificed miner safety to maximizing profit.