‘Guest Worker’ Trafficking: Can the Feds Really Deal With the Problem? 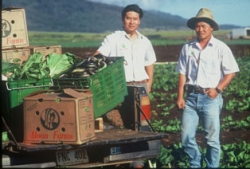 Alec and Michael Sou continue to operate Aloun Farms in Hawaii, which employed Thai workers held in slavery-like conditions. In 2010 they were charged with human trafficking.   (Photo via Free the Slaves Blog)

Last year, the leaders of the U.S.-based foreign labor and supply company Global Horizons were indicted in what the Department of Justice considered the biggest human trafficking case ever brought by the federal government. They were charged with holding 400 Thai guest farm workers in the United States against their will in conditions that essentially amounted to slavery.

The workers were given guest visas to work in the United States under the H-2A visa program. They were kept under brutal conditions under armed guard in Hawaii and forced to live in substandard conditions in hot shipping containers "with no carpet, beds, furniture, indoor plumbing, kitchen or air conditioning," according to federal investigators. They were under constant threat of violence from gun-toting guards, and on one occasion a guard told the workers they would be shot if they tried to escape.

Several company officials have already pleaded guilty in plea bargain deals and several others are expected to stand trial. In 2006, when the workers' maltreatment was discovered, the Department of Labor also debarred Global Horizons from participating in the H-2A agricultural guest worker program for the mandatory three years; it issued an additional three year debarment in 2009. Last week, a judge upheld the three year debarment after Global Horizons appealed it.

As I have previously written for In These Times, with the U.S. government giving out $530 billion dollars a year in federal contracts, debarment is a powerful tool to force corporations to obey laws that would help protect workers and their communities. But despite laws that forbid law-breaking companies from receiving government contracts, the federal government rarely enforces them.

“This is obviously a step in the right direction. This company shouldn’t be getting new government contracts,” says David Madland Director of the America Worker Project at the Center for American Progress. “However, you can also see that it’s so limited. It’s just for this particular program. In theory, they could keep getting other types of contracts and grants.”

The company—whose president, incidentally, sued CorpWatch in late 2006 over a story written by In These Times Contributing Editor Kari Lydersen about the abuse of Thai farm workers—did not respond to numerous requests for comment for this story.

As I wrote in February, only a handful of major corporations that have committed major crimes have been suspended from receiving government contracts since the mid-1990s, according to testimony before Congress by the Project on Government Oversight: “General Electric (for a period of five days); now-defunct companies WorldCom, Enron and Arthur Anderson; Boeing (which received multiple waivers to receive new contracts during its suspension); and IBM (for a period of eight days in 2008). The rules are not enforced vigorously due to a lack of resources and a lack of clear government guidelines for enforcement.

Some labor and immigration advocates claim that the guest workers program as a whole is the problem and that debarring labor recruitment and supply companies that abuse the system won’t solve anything.

“Debarment of Global Horizons is a step in the right direction, but it doesn't solve the problem. It eliminates one party, but what about the farms doing it?  There still are tons of recruiters working overseas to recruit new workers for these farms,” says Farm Labor Organizing Committee (FLOC) President Baldemar Velasquez, whose union represents 23,000 farm workers in the United States.

Oftentimes, a company like Global Horizons, which functions as a middleman to recruit and provide labor to farms, will go out of business when it is debarred. However, the farms that use that slave labor will continue to operate. The farms are protected due to the limited legal liability of using a middleman labor contractor. New groups recruiting and providing guest workers will spring up in their place and continue to provide people for those same farms.

“Anytime you have a guest worker program, it is inherently very corrupt," says Velasquez. “They are all slave labor programs to begin with because there is no oversight on the sending country.”

Often workers are forced to sign outrageous contracts or fees, wherein they mortgage their families land in order to pay for their trip to the United States, as the Thai workers did. Many workers fear speaking out to government regulators because they fear they might lose their family’s land overseas.

“This problem is not going to be solved by regulation by government,” says Velasquez. “Farm workers have to have an organization [through which] they can air their complaints without a fear of retaliation. They need some type of organization, such as a union, in place so they can police their own experience. This is the only way we are ever going to really eliminate the problem of forced labor in the United States."