Why Does the Chicago Teachers Union Care About Interest Rate Swaps? 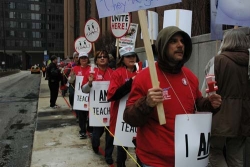 Last week, the Chicago Teachers Union launched a campaign for the Chicago Public School system to renegotiate costly interest rate swaps with four major banks: Bank of America Corp., Goldman Sachs Group Inc., Royal Bank of Canada and Loop Capital LLC. The union claims the interest rate swaps cost the Chicago Public School System $35.9 million in the last year and that the deals with the banks have produced a $120.7 million net loss for the school system since 2003.

The anti-interest rate swap campaign has become a key part of the teacher’s union campaign in Chicago to fight layoffs caused by budget shortfalls. But up until a few years ago, unions rarely understood interest rate swaps deals, let alone campaigned against them.  The fact that unions are gaining a broader knowledge of such deals says something remarkable about what is happening in the labor movement.

Fast-forward almost 10 years later after over leverage and over speculation by the big banks caused the economy crashed; In an effort to make it cheaper for big banks to borrow money and increase their profit, the Federal Reserve cut interest rates to zero.

So while interest rates have lowered dramatically in order to benefit the profits of big banks, the Chicago Public School system is still paying the equivalent of 3.66 percent interest rate directly to the banks, the banks are paying next to nothing in actual interest rates. According to the Chicago Sun-Times: “Records show that for one swaps deal with Loop Capital, CPS pays a fixed 3.66 percent while the bank pays back a floating rate close to 0.05 percent.”

In other words, the banks, which lobbied for lower interest rates from the Federal Reserve, are making a pure profit off the difference between those two interest rates while the Chicago Public School system is laying off teachers in order to continue paying these interest rate swap deals to the banks.

Up until a few years ago, hardly anybody in the labor movement knew what these deals were, let alone launched major campaigns against them. Banks were able to make huge profits through complex opaque financial deals because typically the people signing them didn’t understand what the deals entailed. Now all that is starting to change, as workers educate themselves about the operation of big banks and the job crisis continues. Interest rate swaps cost local governments approximately $29 billion a year, according to one study put out in 2010 by the Service Employees International Union.

Last year, several coalitions of labor unions launched campaigns against similar deals in Southern California. They even won a major victory in Los Angeles forcing the banks to renegotiate some of these deals. Unions with employees in the public sector whose members were affected by budget cuts began to take notice and educated themselves about interest rate swaps. Now we are starting to see the movement against these interest rate swaps deals starting to spread across the country.

Some in the labor movement are claiming the fight for financial reform legislation at the federal level is over and see union campaigns against the big banks as mere “political sloganeering.” However as the fight in Chicago shows, unions are beginning to take action against banks at the local level. At that level, where grassroots get-out-the-vote efforts sometimes matters more than money, some unions apparently think a victory against the big banks is possible.