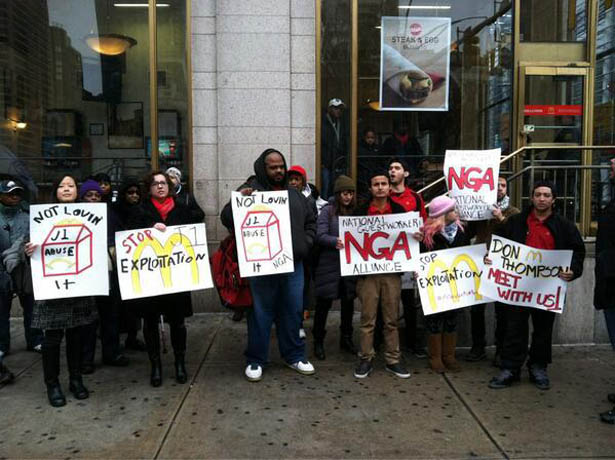 Archiel Buagas thought she was doing everything right. The young Filipina nurse secured a special work visa to come to the United States and arranged a job at a New York nursing home with the help of a recruiting agency. Things started to feel wrong when they refused to give her a copy of her contract. She and the other nurses in her group soon found themselves working frantically to care for 30 to 60 patients per shift, without regular breaks, and she was soon driven to exhaustion by the indecent pay and relentless stress.

“I was so scared of going to work that before my shift," she later testified to labor advocates. "I would be crying, I’d be [vomiting] because of anxiety and nervousness. I would have diarrhea.... [T]he only thing that made me sleep was the fact that I’m so tired .... I wanted to go home.”

Buagas learned the hard way that her path to American prosperity would be fraught with betrayal. It wasn’t because she didn’t have the right papers, it was because her papers offered her no protection against an industry that preys on the hopes of migrants seeking a better life abroad. As Congress debates immigration reform, most of the public focus has been on “legalizing” the 11 million undocumented immigrants currently living “underground,” and on the expansion of labor-based visas to bring more immigrants into the workforce on a “legal” basis. But beyond the question of who gets a shot at that vaguely defined “path to citizenship,” labor advocates are pushing lawmakers to give meaningful protections and rights to workers who are disenfranchised by legal, social, and economic marginalization.

In many cases, many immigrant workers with visas (that is, those who are technically legally authorized to work in the United States) are at least as vulnerable as their undocumented counterparts to abuses such as wage theft, labor trafficking and employer intimidation. In a recent report on labor recruitment abuses, the International Labor Recruitment Working Group (ILRWG) explained that under the current poorly regulated visa structure:

employers are able to exploit an essentially captive workforce, and workers are deterred from asserting their rights under U.S. law. Workers who complain routinely are blacklisted, threatened or physically intimidated by recruiters. Additionally, many internationally recruited workers face language barriers, racism, xenophobia, sexism and the pressures of poverty in both the United States and their home countries.

The immigration reform bill now advancing in the Senate might help close some of the regulatory gaps. One section would bar recruitment fees imposed by foreign labor contractors, including the predatory charges imposed for job placement, legal processing and transportation. These fees have often been used to impose a modern form of indentured servitude.

In one particularly egregious case, teachers brought to the United States from the Philippines using employment-based visas, were charged $16,000 to secure jobs and then forced into a contract that skimmed 10 percent of their wages for the next two years.

Another reform proposal would require greater transparency in the recruitment process to subject labor brokers to more oversight and ensure workers are fully informed of their contract terms. Currently, regulation of recruiters ranges from inconsistent to virtually nonexistent. This is in part due to segmentation among agencies, with some programs admininstered under the State Department and others managed by the Department of Labor. But the structure of recruitment is generally diffused for convenience, keeping employers distant from the shady transactions that lure many workers under false pretenses or tie them to unfair contracts. The global recruitment industry operates opaquely through a chain of players, from the labor agencies contracted by the employer, to the local boosters who recruit in the migrants’ home countries, marketing coveted job opportunities in the United States.

And the “opportunities” abound. In 2011, nearly 700,000 visas were issued under various federal programs, governed by myriad sets of rules and eligibility criteria. A major share of temporary “guestworkers” enter as agricultural laborers. But thousands have entered under more obscure programs, such as the State Department’s J-1 “educational” work program for students.

The J-1 has been scandalized by the exposure of exploitation of young workers in a Pennsylvania Hershey’s plant and, more recently, McDonald’s restaurants. (The State Department has initiated an overhaul of the program in response to public pressure, though many youth involved in the program continue to organize against ongoing abuse of guestworkers.)

Though the emerging Senate proposal would leave intact the basic system of using visas to channel “guestworkers” into the high-demand, low-wage sectors, some provisions aim to give workers more power in the workplace to check unscrupulous employers and agencies.

Another provision of the pending Senate bill bars retaliation against workers who speak out against unfair recruitment practices. This supports a broader campaign for whistleblower protections for immigrant workers who suffer wage and safety violations or discrimination. Sarah Rempel, a policy attorney with Centro de los Derechos del Migrante, described the policy as a protection for all workers at a press conference this week: “This bill would prohibit that retaliation and offer protections for students and other workers in that process, so that these complaints can be brought forward. That's a key protection for workers brought in through foreign labor recruitment as well as U.S. workers working in the same sectors."

In a follow-up correspondence, Centro de los Derechos del Migrante noted that the drive to expand temporary worker programs through immigration reform "builds on a potent myth: that international labor recruitment is a win-win solution, benefiting workers and employers alike. Ignorance of the abuses inside labor recruitment, and the role of U.S. law in propagating them, therefore forms a crucial component in the flawed public narrative on immigration reform."

As the Senate approaches a vote on immigration reform, there is widespread disillusionment among activists over many aspects of the "compromise" legislation, especially restrictionist proposals to further militarize the border and to constrain the citizenship process for the undocumented. But the proposals to curb some of the worst abuses taking place within the “legal” immigration system should inform a long-term dialogue about the universality of workers’ struggles. The debate is not simply about whom to “legalize,” as many workers who are here with the government’s authorization face mistreatment and exploitation as well.
The pending reform bill would largely perpetuate the labor structure that degrades immigrants and other vulnerable communities. The overarching question is how to bring the law in line with the realities of migration and the global economy, as vast economic disparities drive migration across borders, institutionalize inequality within the United States, and keep workers divided by the artifice of citizenship, along with structural racism and poverty. Immigration reform will not resolve that larger question, but the debate unfolding in Congress has begun to reveal some of the contradictions at the heart of America’s “prosperity”--and the moral bankruptcy that makes it possible.