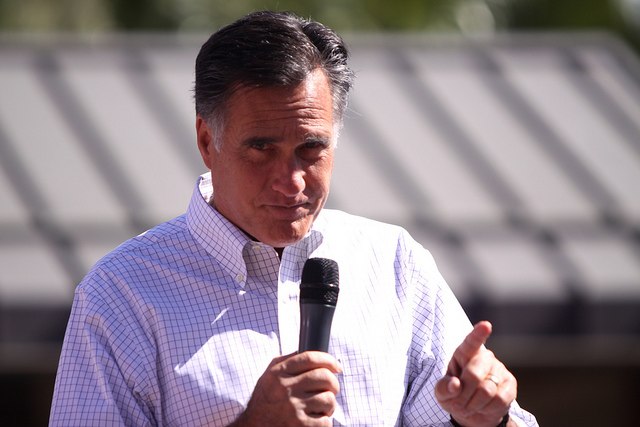 What Mitt Romney and the GOP would like to do to labor.

Except for one quick swipe at teachers unions by Mitt Romney on Monday, neither of the major-party presidential candidates—nor their running mates—mentioned workers’ rights, collective bargaining or organized labor during any of the four presidential-campaign debates.

Usually, anything happening in the swing-state-rich Midwest gets scrupulous attention from presidential candidates. Given the momentous labor battles that played out across Midwestern political stages over the last few years, as GOP lawmakers waged attacks on unions in Wisconsin, Indiana and Ohio, the omissions were surprising. But then again, given unions’ declining size and presumed lack of clout among undecided voters in swing states, perhaps they weren't.

When unions have popped up during the general election season, it was as enemies of progress. Romney’s reference to unionized teachers as an obstacle to reform during the foreign policy debate, of all places, was so quick you probably missed it. In fact, he would like to eviscerate them. (More on that below.)

Labor leaders have painted a stark picture of what might lie ahead should Romney win. “A worker voting for Mitt Romney is like a chicken voting for Colonel Sanders,” Richard Trumka told Working In These Times during an AFL-CIO rally in August. Romney wants to “annihilate organized labor as we know it,” Teamsters President James Hoffa said in September.

Overheated rhetoric is a hallmark of every campaign season. But the GOP’s and Romney’s positions on labor and collective bargaining—from support for a federal union-weakening “right-to-work” law to eliminating most public-sector bargaining rights—are genuinely to the right of where they were even four years ago. With unions now accounting for less than 12 percent of the workforce (down from 36 percent in the 1950s), it is now possible to imagine a country devoid of labor power, replaced by a corporate vision of “employee empowerment and workplace flexibility,” as the GOP 2012 platform puts it.

That platform represents a new level of aggression toward the labor movement, says Kate Bronfenbrenner, Director of Labor Education Research at the Cornell University School of Industrial and Labor Relations. If it were enacted, it “won’t destroy the labor movement, but it’s serious,” she says.

If Romney and the GOP's vision somehow came to pass, through a Republican sweep of the White House and Capitol Hill, what would be left of organized labor? In short: very little. It would be far worse than the Gov. Walker’s ideal Wisconsin or Gov. Kasich’s ideal Ohio.

In two sentences, Romney’s official jobs and economic plan, titled “Believe in America,” acknowledges what unions have accomplished in the last century. “Over the years, unions have made extraordinarily important contributions to American society,” it reads. “Many of the protections and benefits enjoyed by workers in the 21st century are the result of sacrifices and struggles and hard-won battles fought by unions in an earlier era.”

The GOP’s platform doesn’t even bother—in fact, it doesn’t once mention collective bargaining or workers’ rights. The documents brand unions as dangerous artifacts of a bygone era run by “stooges,” “bosses” and “elites” that stand in the way of a more prosperous future.

Romney's plan soon switches tone, darkly referring to unions as a “force within … that would undermine our key competitive advantage.” There are even “union CEOs” in Romney's world—surely the only type of CEO he dislikes. Unions are antiquated and expensive, and American workers are smart enough to know that. What else could explain the precipitous drop in union membership during the last 40 years? (No mention, of course, of the weakening of labor laws during that time, and the increasing brazenness of employers in delaying elections and intimidating pro-union workers).

None of this rhetoric is surprising. But the totality of what the party and its current standard bearer now call for is breathtaking. Step one would be to restore Bush-era standards:

1. Change federal law to guarantee that all pre-election campaigns last at least 30 days. (This wouldn't change the status quo, since the National Labor Relations Board's rule to speed up union elections is stuck in court.)

2. Change federal law to “explicitly protect the right of business owners to allocate their capital as they see fit.” This is a reference to the NLRB's lawsuit against Boeing for violating federal law by opening a plant in South Carolina in retaliation for workers in Washington going on strike. (The NLRB dropped the case in December 2011 after the workers' union struck a deal with Boeing that secures their jobs and raises wages.)

3. End “project labor agreements” on federally funded construction projects, which require a collective bargaining agreement and the use of union labor. These have been a political football: George W. Bush forbid them; one of President Obama's first actions was an executive order reinstating them.

So far, nothing movement-shattering. This would basically result in a Bush-era NLRB, which is likely anyway once Romney is able to make appointments to the federal agency charged with enforcing labor law. But Romney would also like to:

4. Change federal law to “guarantee” the secret ballot in every union certification election. In other words, employers would not have the option of recognizing a union via “card check,” as they currently can.

5. Repeal, on “day one,” the federal law requiring prevailing wages on all federal public works projects. This is the Davis-Bacon Act, signed into law by Herbert Hoover and briefly suspended by George W. Bush in areas hit by Hurricane Katrina.

6. Prohibit the use of union funds automatically deducted from worker paychecks for political purposes. This is what ALEC-backed “paycheck protection” provisions attempt to do.

7. Ban teachers unions outright from donating to political campaigns. (He's fine with corporations donating as much as they’d like, however.)

8. Pass a national “right-to-work” law, which would allow all workers benefiting from union agreements and services to avoid paying dues. Romney was opposed to this in 2008, but now supports such a law, in line with the new GOP platform.

Taken as a whole, this would be a blueprint for a union-free America. Still, it doesn't go quite as far as the GOP platform, which would like to add a final nail to labor's coffin by asserting that “no government at any level should be dues collector for a union.” (The platform also calls for the withdrawal of federal and state regulations protecting hundreds of thousands of low paid and vulnerable employees in tribal workplaces.)

First: Since the anti-union law went into effect in Wisconsin, AFSCME's membership has since fallen by more than 50 percent in the state.

Second: In 2011, 20 of the 25 states with the lowest unionization rates were “right-to-work” states, according to the Labor Department. North Carolina, where 2.9 percent of workers are union members, has the lowest rate.

Should Romney's agenda come to pass, labor would have to scramble to adapt. A national “right-to-work” law would make automatic dues deduction all-important, says Cornell's Bronfenbrenner, whose research on employer intimidation during union elections helped form the basis of the NLRB's thwarted election speed-up rule. “If you could keep automatic dues deduction, it wouldn't destroy the movement,” she says. “In high [union] density areas, dues deduction would be likely to continue.”

“The question is, will workers get demoralized, or will they do what they need to do—fight back and be smart about it? The only way [the movement's] going to come back is if workers and organizations go out there and organize,” says Bronfenbrenner, noting the recent Walmart workers strike and “carwasheros” victories. “We're not going to get labor law reform in this country.”

Three years after the Employee Free Choice Act failed in the Senate and four years after candidate Obama campaigned on its passage, that much is clear. Almost as sobering is the fact that this time around, President Obama needn't make any specific promises to the labor movement. Just like the Democratic Party, he merely has to make clear that he won't try to destroy it.