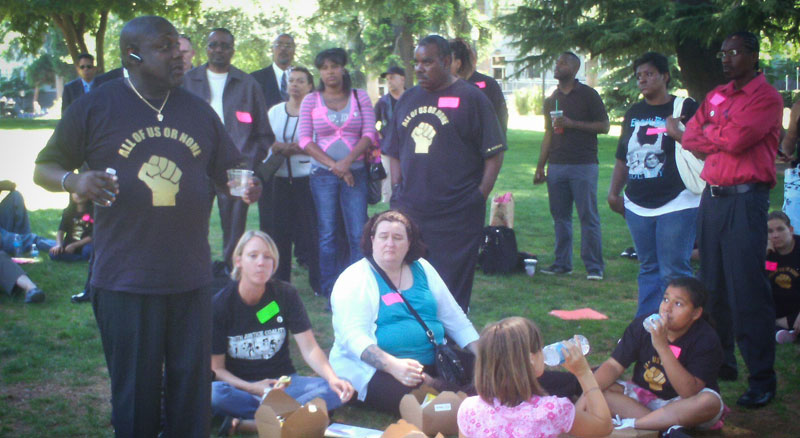 Dorsey Nunn from All of Us or None speaks at a rally during the Quest for Democracy Lobby Day in Sacramento in May. (Photo courtesy of All Of Us or None)

No Longer a Prisoner of the Past

Rhode Island ‘bans the box,’ opening up job opportunities for the formerly incarcerated.

A new wave of prisoner and ex-prisoner-led groups that organizers have dubbed the “formerly incarcerated peoples’ movement” is mobilizing.

Rhode Island has taken an important step toward ending employment discrimination against the formerly incarcerated. On July 16, Gov. Lincoln Chafee (I) signed Ban the Box legislation that prohibits employers from asking questions about conviction records on job applications. Ten states and dozens of cities have passed similar legislation, and Rhode Island is the fourth state where the law will apply to private as well as public employers. These victories are the result of a growing movement to help many ex-prisoners regain the rights lost when they got locked up.

The National Employment Law Project estimates that there are 65 million people with criminal records in the United States. Most want what all people want: access to job opportunities, education and healthcare. But when you’ve got a record, the obstacles to obtaining these things are substantial. In many localities, employers and landlords are legally allowed to refrain from hiring or renting to people based on past felony convictions. And according to data compiled by the Sentencing Project, nearly 6 million Americans with criminal records were disqualified from voting in the 2012 election. With little political power to change the laws that discriminate against them and scarce opportunities for housing and jobs on the outside, for many former inmates the prison gate becomes a revolving door, as the newly released turn for income to the activities that got them into legal trouble in the first place.

A new wave of prisoner and ex-prisoner-led groups that organizers have dubbed the “formerly incarcerated peoples’ movement” is mobilizing to break this cycle. For the movement, securing rights to voting, jobs and housing is an end, but also a means: Once organized, prisoners and ex-prisoners could constitute a powerful force for broader progressive change.

But both language and trust barriers can stymie many civil rights organizations and government-backed re-entry groups trying to engage formerly incarcerated people. Ex-inmate Dorsey Nunn believes that to have any  chance of achieving a more level playing field, ex-prisoners need to be leading the movement themselves. Nunn is the head of All of Us or None, a San Francisco-based ex-prisoner rights group that educates and registers new voters at “the collard greens festival, car shows, restaurants, bars and NA meetings.” In 2005, the organization launched a successful campaign to pass Ban the Box legislation in San Francisco, and currently it is pushing progressive non-profits and foundations to adopt ex-inmate nondiscrimination hiring policies.

Malissa Gamble is the director of Philadelphia-based The Time is Now to Make a Change Inc., a support center for formerly incarcerated women that offers counseling to ease re-entry to society. Gamble’s concern for exprisoners’ rights was sparked during a 15-month prison stay in 2004 and 2005. Gamble began writing to people on the outside about her uncertain future, including Pennsylvania state Sen. Shirley Kitchen (D), who personally responded to many of Gamble’s letters. After Gamble’s release, the two met and became partners in furthering the cause of formerly incarcerated people throughout Philadelphia. Together, they’re pushing for the restoration of voting rights andthe expansion of opportunities for the black, Latino, disabled and transgender communities, whom the justice system punishes most harshly.

The Time is Now to Make a Change has helped to register thousands of Philadelphia voters with conviction histories, most of whom are black and from low-income backgrounds. Meanwhile, Kitchen has introduced legislation like the Second Chances bill, which would allow Pennsylvanians to expunge non-violent convictions from their records if they remain out of legal trouble for five years. (The bill is currently awaiting consideration by the state Senate’s Judiciary Committee.) Kitchen has taken a particular interest in the issues of ex-prisoners. She says that in her district, they represent “a growing population … and that’s because [in my district] there’s a disproportionate number of people in poverty.”

Alabama-based Rev. Kenneth Glasgow formed the Ordinary People Society (TOPS), an ex-prisoner re-entry program aimed at cutting recidivism, after discovering firsthand the “collateral consequences” of imprisonment. In 2001, Glasgow was released from prison and tried to register to vote. But Alabama was then one of 35 states that denied voting rights to felons, and he was turned down. Glasgow, who is the younger brother of Rev. Al Sharpton, began a campaign to change Alabama’s law, and in 2003 the state passed a law making it easier for ex-prisoners to regain their voting rights. In May of this year, the movement scored another victory when Virginia’s government pledged to restore voting rights to thousands of people with past convictions.

But the movement isn’t driven solely by the desire for voting rights. The broader motivation, says Glasgow, is “to show people who have never been incarcerated that we are formerly incarcerated, but we are human beings first.”

Martha Wallner will soon join the communications team at National Nurses United, headquartered in Oakland, Calif. Toshio Meronek is an independent journalist who has covered disability, LGBT/queer issues, and prisons for The Advocate, Huffington Post, The Nation, and Truthout. He is a former editor of The Abolitionist, the newspaper of the anti-prison industrial complex organization Critical Resistance. Follow him on Twitter at @tmeronek and read his other writing for In These Times here.