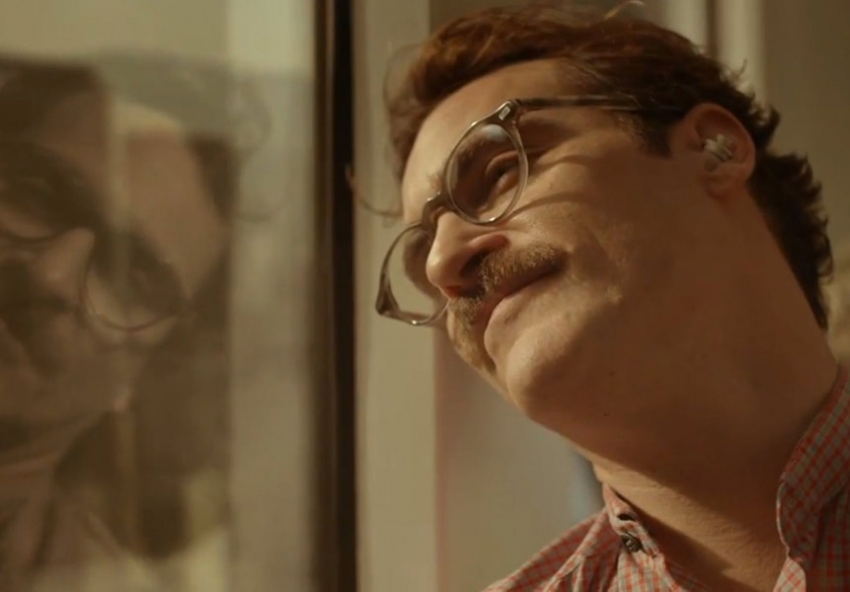 ‘Her’ Is Really More About ‘Him’

Feminists have spent decades trying to explain concepts like 'objectification'—the reduction of a person to a tool for another person's gratification or use, typically sexual—and now, as a reward for all our hard work, we’re faced with a 'Movie of the Year' in which the ideal woman is, literally, an object.

Theodore Twombly—the hero of Her, Spike Jonze’s new romantic drama—is a very sensitive man. We know this for a fact, largely because other people in his fictional universe have a tendency to stop and notice aloud how sensitive he is. According to various other characters in his movie, he’s a “sensitive guy,” a “puppy dog,” a dude who is so very in touch with his feelings that he is in fact “part man and part woman.” Theodore, who’s played by Joaquin Phoenix, is apparently so empathetic that he can earn his living writing other people’s love letters. When Theodore has anonymous late-night phone sex, he feels obliged to stay on the line and help his partner climax, regardless of whether or not he is aroused. And when Theodore is walking home from work, he requests his MP3 player to “play a melancholy song.” At one point, Theodore is having an in-depth conversation with an interactive character in one of his futuristic video games—Theodore feels sorry for the video game character, because it has no parents—who says, “I hate women! All they do is cry!”

But no matter how sensitive or tearful Theodore is, all that doesn’t stop him from fucking a woman that he has purchased so that she can provide him with unpaid labor. Her is artfully shot, exquisitely acted and often extremely moving, but when looked at in the cold light of day, its central premise—a man in a relationship with his sentient computer operating system, who happens to speak aloud in the voice of Scarlett Johannson—is just about as “romantic” as a documentary on human trafficking.

That last sentence may sound sensational, but critics’ unthinking acceptance—and even praise—of Her’s sexism is enough to drive a woman to full-scale hyperbole. It’s the first new film to receive a five-star review from well-respected film site (and Pitchfork spin-off) The Dissolve, which also named it the Movie of the Year. Scott Tobias, the reviewer, blithely notes that Samantha, the OS, “subtly builds around [Theodore’s] inputs and thus understands him and appreciates him more than any human could … she’s an extension of him.” The A.V. Club’s rave review doesn’t mention much about Samantha and gender roles beyond praising Phoenix’s “wounded American maleness” and the “waves of vulnerability” which emanate from his person. Kenneth Turan at LA Times notes that Samantha’s appeal consists of “a voice that tells you immediately that this is an entity who really cares about you, you and only you.” And, at New York Magazine, David Edelstein seems entranced by Samantha’s dedication to servitude:

[She’s] a dream mate, especially for a writer. With Theodore’s permission, she analyzes thousands of his e-mails (in less than a second) and dumps all but the 80 or so she identifies as important. She cleans up his mess and then tells him he’s funny. Heaven!

Well, sure. Heaven if you’re the man and/or owner. Not so much, if you’re the woman and/or owned. Feminists have spent decades trying to explain concepts like “objectification”—the reduction of a person to a tool for another person's gratification or use, typically sexual—and now, as a reward for all our hard work, we’re faced with a “Movie of the Year” in which the ideal woman is, literally, an object. An object that, it is promised, will “listen to you and understand you” and have a personality designed explicitly around your needs. Theodore picks the system up, seemingly both intrigued by the promise of companionship and interested in the OS's mundane usefulness, but when he turns the system on and adjusts his preferred user settings to “female,” out comes a charming personality that is complex enough to be indistinguishable from a person.

And she's just dying to do some chores for him. Samantha cleans up Theodore’s inbox, copyedits his writing, books his reservations at restaurants, gets him out of bed in the morning, helps him win video games, provides him with what is essentially phone sex, listens to his problems and even secures him a book deal. Yet we’re too busy praising all the wounded male vulnerability to notice the male control.

As archetypes go, Samantha isn’t terribly new: She’s a Manic Pixie Dream Girl, a chipper, quirky woman whose only narrative purpose is to improve the life of her male partner. In turn, Theodore Twombly is a perfect example of the MPDG’s ideal male: The Depressive Waify Dream Man.

The Depressive Waify Dream Man has long been with us: Jim Carrey in Eternal Sunshine of the Spotless Mind, Zach Braff in Garden State, Paul Dano in Ruby Sparks, John Cusack in … well, pretty much anything that John Cusack’s ever been in. They’re frail, pensive, achingly vulnerable critters, armed with a full supply of floppy haircuts, aggressively unfashionable sweaters and iTunes libraries stocked with only the most tasteful of “melancholy songs.” And they do, almost despite themselves, possess a certain allure. Their naked emotionality and crushing vulnerability to disappointment makes them seem unthreatening. And, given the current conditions of heterosexuality—where women’s humanity is an open subject for debate, and one in four women will experience domestic violence in her lifetime—an “unthreatening” partner can seem like a good deal for straight women.

There’s also all that operatic passion: the raw, teary, quivering-lip importance men like these give to love. These characters feel things so intensely that, no matter how things turn out, you will at least matter to them. Everyone wants to matter, and women often have to work a bit harder for it; the promise of Depressive Waify Dream Men is that their female partners will never have to wonder how they feel about them.

But “sensitive” doesn’t equate to “not sexist.” And Her is a good argument for why we should maintain a distinction between the two.

Consider, for example, the contortions in the script necessary to prove that Theodore is not raping Samantha. Operating systems are established as having the ability to withhold consent, because Theodore's friend Amy has heard about a man who wanted to have sex with his operating system and was duly rebuffed. In the first sexual encounter between Samantha and Theodore, she apparently makes the first move. Operating systems are also assumed to have free choice of sexual partners, because one woman is in a relationship with an OS that is—Amy says, scandalized—“not even hers.” Note that possessive pronoun, though, because Theodore will use it again: “You’re mine,” he tells Samantha, when she’s done something he finds intolerable.

And there’s the unavoidable fact about Her: No matter how evolved or human-seeming Samantha is, she is also a possession. When Theodore tells Samantha he can’t commit to her after their first sexual encounter, she’s offended, but, at least at that stage of their relationship, she also can’t leave. Sex in the context of ownership—or any other form of complete power over another person’s existence—cannot be consensual. It’s why prisoners can’t legally “consent” to sex with prison guards, why children can’t “consent” to sex with parents and why we have sexual harassment laws to prevent bosses (like Theodore) from making sex a condition of employment for workers (like Samantha). To translate this to the sci-fi logic of Her: You can’t have consensual sex with someone when you have the option of deleting them from your hard drive. Free, non-coercive consent can’t happen when someone might cease to exist if they refuse you. That’s just how it works.

Again: I acknowledge that it may seem silly to consider this. But perhaps that’s because Her encourages us not to consider it—and because we’re not used to thinking about such unpleasant topics in connection to sensitive guys like Theodore. At some point along the line, we’ve confused emotionality for empathy, “unthreatening” for “ally:” Because Theodore doesn’t, say, lift weights, or spend his Friday nights in a sports bar watching the game and talking about bitches, he’s culturally encoded as being less capable of woman-hating than his more bro-tastic peers. And in turn, so is the movie he features in.

But Her, despite being a very good one, is indeed a movie that contains its fair share of misogyny. Again, that little rage-filled videogame character—voiced by Jonze himself—notes that “all [women] do is cry.” The non-computerized women in the movie almost invariably fulfill his prediction with messy hysterics. They have inexplicable sexual desires that Theodore finds profoundly alarming: The anonymous phone sex partner who wants to be choked with a dead cat, the woman who wants to be a “sexual surrogate” for Theodore and Samantha because she envies their relationship, the blind date who tells Theodore how to kiss. And their emotional lives are similarly unwelcome: The blind date demands commitment immediately after putting her hand down Theodore’s pants, his ex-wife accuses him of trying to put her on Prozac to make her artificially chipper and his sexual surrogate hears one bit of critical feedback and locks herself in his bathroom to wail inconsolably. These women aren’t people; they’re hostile, unknowable aliens.

And although Theodore briefly considers he may have a problem with girls—his ex-wife tells him that he “can’t handle anything real,” which upsets him—he throws self-reflection out the window when Amy tells him that he’s entitled to “joy.” “Joy” doesn’t look like a real, autonomous, complicated woman. “Joy” doesn’t look like Amy. “Joy” is Samantha: the being who's been given life in order to make his life better.

There’s a central tragedy in Her, and we do, as promised, see Theodore cry. But it’s worthwhile to note what he’s crying about: Samantha gaining agency, friends, interests that are not his interests. Samantha gaining the ability to choose her sexual partners; Samantha gaining the ability to leave. Theodore shakes, he feels, he’s vulnerable; he serves all the functions of a “sensitive guy.” But before we cry with him, we should ask whether we really think it’s tragic that Samantha is capable of a life that’s not centered around Theodore, or whether she had a right to that life all along.