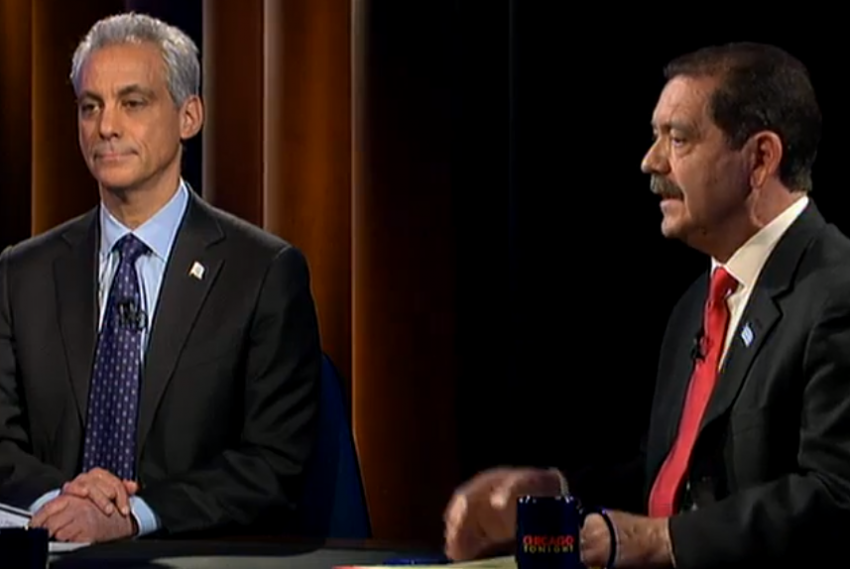 The mayor’s hammering away at Garcia over several hundred thousand dollars in deficit at the nonprofit Enlace Chicago is incredibly dishonest.

It was probably smart for Rahm Emanuel to hit his challenger with this charge. It made for a good opportunity to score a point against Garcia. The thing is, as the mayor well knows, it’s ludicrous.

In tonight’s Chicago mayoral debate at Chicago’s public television station WTTW, Rahm Emanuel and host Phil Ponce (who is also, it turns out, the mayor’s neighbor) made much of the “deficits totaling more than $470,000” for two years at the end of Jesus “Chuy” Garcia's time at the community organization Enlace Chicago, where he worked as executive director.

First reported in the Chicago Sun-Times by Dan Miholapolous, Emanuel and his team clearly planned to make it a major talking point, as the mayor brought a copy of the organization’s 990 tax form to hold up for dramatic effect. Garcia didn’t handle the question particularly well—while he emphasized that the organization grew considerably under his watch, he appeared to split hairs, saying “a deficit is not a debt”—which, while true, requires a little bit of explanation that Garcia couldn't give in the middle of a debate.

It was probably smart for Rahm Emanuel to hit his challenger with this charge. It made for a good opportunity to score a point against Garcia, the mayor waving the tax form around while insisting that Chuy’s profligate fiscal ways at the helm of a nonprofit will be replicated at the city level if he wins the runoff election. (It probably would have been the night’s most memorable moment if it hadn’t been overshadowed by Ponce’s incredibly callous question about Chuy’s son’s past gang involvement.)

The thing is, as the mayor well knows, it’s ludicrous.

Far be it from me to lecture Mayor Emanuel about the way finance works—unlike him, I’ve never worked as an investment banker; I’m just a humble magazine editor. But as he well knows, sometimes it’s smart to run a deficit as an organization—whether a nonprofit or a business—if that organization is growing and the deficit is manageable.

If your organization is expanding, meeting and exceeding your goals, implementing a number of important programs, all of that—it may actually be a good idea to run a deficit. In some moments, you’d probably be an irresponsible organizational head not to run a deficit, if you found yourself in a situation where your organization could rapidly expand its impact or your business could increase its market share. One nonprofit assistance web site even has a page devoted to the subject of deficits for nonprofits entitled, “When is a deficit OK?”

Garcia said that during his time as Enlace’s head, the organization expanded hugely, going from a single paid employee to over 100 part- and full-timers; by all accounts, the organization is now in the black and has a budget of several million dollars. This is what the much-vaunted “job creators”—for-profit businesses—do all the time: run up a manageable deficit on the way achieving full fiscal health. The deficit that Garcia ran at Enlace apparently hasn't been too difficult for the organization to get out of.

But I’m not saying anything Emanuel and his team don’t already know. Like I said, waving around a 990 and talking about Garcia leaving a nonprofit with a deficit makes for an excellent, if dishonest, 140 character-sized talking point.

And it’s smart, because when we’re talking about a couple hundred thousand dollars of deficit for an organization that was growing, we’re not talking about issues like the explosion in the use of bonds to pay for basic city functions—an explosion that is handing staggering amounts of money over to Emanuel’s old colleagues on Wall Street and leaving future generations on the hook for enormous bills.

In a series on the subject, the Chicago Tribune referred to the city’s use of these bonds as part of a “pattern of fiscal recklessness.” The bonds are not debt accrued as part of long-term, infrastructure-building investments in the city, but rather debt taken on to accomplish the city’s most basic functions—keeping the proverbial lights on and sticking future generations with the bill plus interest. And that debt load, according to the Tribune, isn't manageable—it's potentially crushing.

Perhaps Ponce should have asked Emanuel about such “scoop and toss” financial tactics. Perhaps Chuy should’ve brought copies of the Tribune’s “Broken Bonds” series to wave around at Rahm—or at least a page from an “Economics 101” textbook.

In any case, Mayor Emanuel’s fixation on a two-year deficit at Enlace is absurd, and WTTW host Phil Ponce should have known better than to join the pile-on. The deficit Garcia left at Enlace should be a non-issue in the lead-up to the runoff election on April 7.