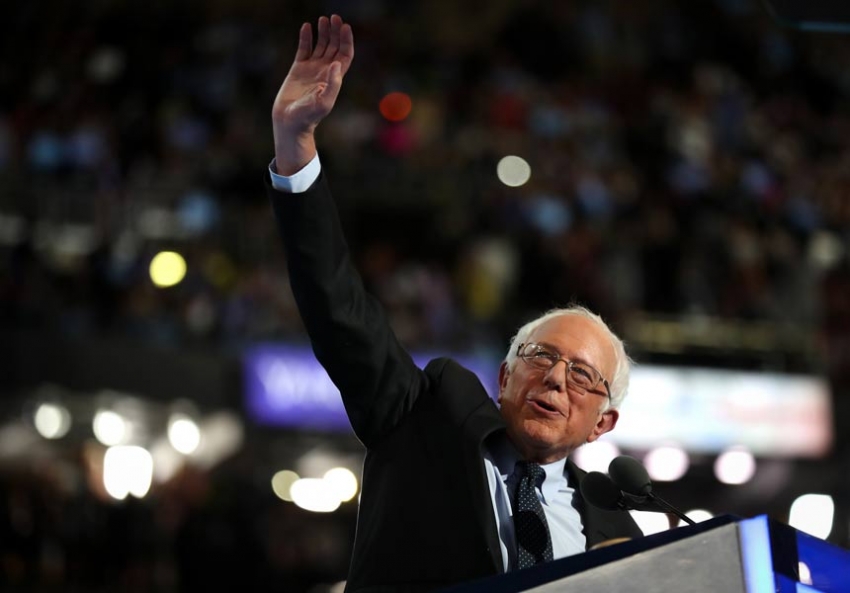 Bernie Sanders brings his campaign to a close at the first day of the Democratic National Convention on July 25. (Joe Raedle / Getty Images)

Why Bernie Sanders Lost, and How the Next Progressive Challenger Can Win

Lessons from a campaign that outperformed expectations but still came up short.

The first and possibly fatal misstep Sanders and his campaign made was failing to realize that he could win.

I’ve come not to bury Bernie Sanders, but to praise him. In his 15-month run for the White House, Sanders shook up the establishment and shifted the boundaries of the politically possible in America. He assembled a coalition of voters that is younger, more progressive and more numerous than anyone could have imagined. As a result, both the Democratic Party’s platform and its nominee’s positions have shifted left. More importantly, Bernie Sanders has set the terms of the debate about the future of the Democratic Party moving forward.

What he did not do is win. As Sanders himself said in his convention speech, “No one is more disappointed than I am.”

But he came close—so close that millions of his supporters could taste it. I got drawn in, too, staying up late into the night in a hotel room in February, juggling spreadsheets and old exit polls, hunting for a plausible path to victory. I even thought I’d found it, and I wasn’t alone.

“Had it not been for the political establishment,” Sanders advisor Larry Cohen, the former president of the Communication Workers of America, says, “Bernie would have won the nomination.”

It’s true that few serious challengers have ever had so many powerful elements within their own party aligned against them. When WikiLeaks unleashed a trove of nearly 20,000 internal emails between Democratic National Committee staffers mocking Sanders and, at times, outright conspiring against him, it seemed to confirm the worst of his supporters’ suspicions that the game was rigged from the start.

But Sanders’ campaign against Hillary Clinton was less a civil war within the party than an attempted hostile takeover. To argue that an anti-establishment candidate lost because the establishment was against him is to close off the possibility of ever successfully challenging that establishment—and that would be a deep disservice to Sanders, his supporters and all they accomplished.

Instead, it seems worth asking why exactly he came up short, and what it might take, next time, for someone to challenge the establishment and win.

The first and possibly fatal misstep Sanders and his campaign made was failing to realize that he could win. You can’t blame them, though—Hillary Clinton spent years preparing for this election, and Sanders entered the race as the longest of long shots.

Whether “winning” was the goal at all was an open question in the beginning, even within the campaign itself. Cohen describes the early days of the campaign as running on two tracks—a traditional track to rack up delegates and a separate track to build a movement for economic justice. “[Early on] I would have thought that the movement-building was the main track,” he says. “It turned out that the more traditional track was clearly within reach.”

Piling up 2,026 pledged delegates across 57 individual primaries and caucuses is a vastly different endeavor than waging a broad campaign for economic justice, and the tactics and strategies to get there are vastly different as well. Sanders spent the first part of the race campaigning in white, liberal college towns where he drew huge crowds with a message that was laser-focused on economic inequality, often to the obvious and awkward exclusion of other issues. In many ways, it was the perfect strategy to draw attention to a message, but it resulted in a coalition that was deep (and deeply passionate) but narrow.

The key to winning a close delegate fight in the Democratic primary is to win big where you can and to keep your losses close. Sanders did the opposite—his wins were often narrow, and his losses were too often blowouts. Nowhere was that more true than in Southern states with large African-American populations.

Much has been written about why Sanders failed to connect with African-American voters, and there’s no sugar-coating the numbers: 76 percent for Clinton to 23 percent for Sanders (among white voters, the two finished dead even). For Sanders supporter Bill Fletcher Jr., a labor activist, former president of TransAfrica and member of Democratic Socialists of America, this was less a failure of effort than a blind spot early on. “The campaign completely underestimated communities of color and completely downplayed the relationship between racial justice, gender justice and economic justice,” he says. “I think those two points were fatal.”

Sanders waited three and a half months after declaring his candidacy before making his first campaign stop in South Carolina. In addition, he made the decision early on to run not just against Hillary Clinton, but against President Obama. Instead of arguing that it was he and not Clinton who was better suited to build on the Obama legacy—for example, using Obamacare as a foundation to get to single payer, instead of scrapping the president’s health reform law altogether—he let Clinton claim the mantle of Obama’s successor. This is a president whose approval rating tops 90 percent among African Americans. These are voters who were never going to vote for Bernie if that meant turning against Barack.

In the end, Sanders came up short by more than 3 million votes—though not enough to prevent many supporters from claiming that it was a combination of election irregularities and voter suppression that cost him the election. But closed primaries are not the same as voter suppression. It’s true that our systems for voting—especially in primaries, which are built on the assumption that not many people participate—are habitually underfunded, understaffed and badly flawed, but there’s no compelling evidence that they’re rigged.

Whether or not the mainstream media is rigged, on the other hand, is an altogether different question. In December, Media Matters reported that ABC’s World News Tonight had devoted less than one minute to Sanders’ campaign in all of 2015, and they weren’t alone in snubbing him. This despite the fact that Sanders regularly drew more support than the object of the media’s early obsession, Donald Trump. Major news outlets also spotted Clinton a 359-delegate lead before the first vote was even cast, by including superdelegates in their official results. That helped create a false impression that endorsements from these party insiders are part of the delegate count that determines who “wins” each state (they aren’t), and a false narrative that the race was never close.

But it’s precisely because of Sanders’ success, against all odds, that the next challenger will face a much different set of assumptions going in.

What Sanders did was pull back the curtain on a complacent Democratic establishment, revealing just how hungry people are—especially young people—for a more progressive and populist economic policy. Sanders’ supporters and volunteer networks are now part of every state, and their influence will be felt within state parties and progressive organizations for a long time to come. If they’re successful, in the future an establishment (including unions and issue-advocacy groups) that is less complacent, less compromising and more receptive to the wants of its members—a more small “d” democratic establishment—may not be so quick to close ranks around a presumptive nominee.

In that environment, a campaign that starts early, with a clear commitment to winning and focus on building a broad and inclusive coalition, could play out a lot differently. Sanders was right about the economic moment that we live in, but he somehow missed the larger social movements and forces—including the struggle for racial justice that is being waged in the streets every day.

“We have to have a storyline that talks to regular people about how these things intersect,” says Fletcher. “Simply being the candidate of economic justice is not enough.” Bernie Sanders had a clear message, and he mounted an inspiring campaign that he used to communicate it. The political debate has forever been altered as a result. But winning campaigns are about more than just making a point.

Naomi Klein, writing in The Nation, put it this way: “We didn’t win, but we could have. We came that close. That’s thrilling. It’s also terrifying. Because if we can win, it means that we must win. That’s a heavy responsibility.”

Christopher Hass is the executive publisher of In These Times. Before joining ITT, he spent eight years working on political and advocacy campaigns, including both the 2008 and 2012 Barack Obama presidential campaigns. He is also the former editor and publisher of P8NT Magazine. @hass_c