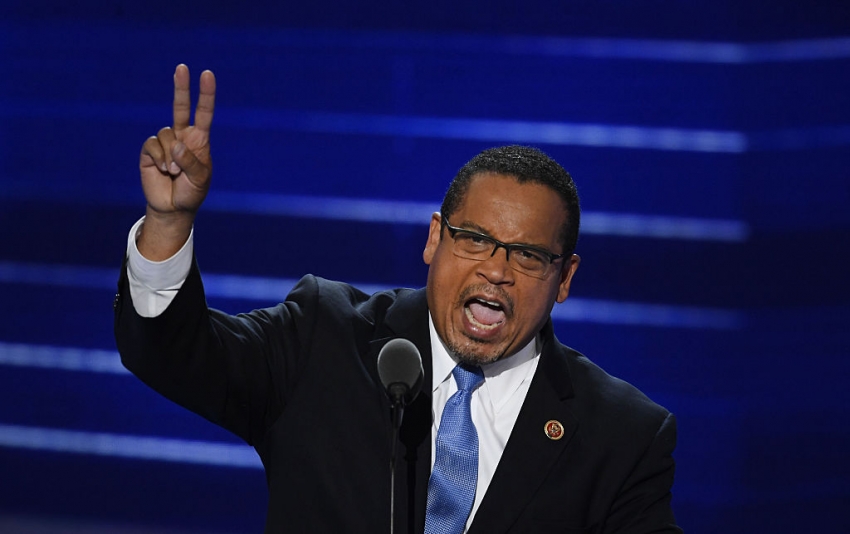 The controversy over Ellison reached its height when, on November 29, the Investigative Project on Terrorism released audio of Ellison at a 2010 fundraiser. (David Paul Morris/Bloomberg via Getty Images)

His rise touched a nerve among pro-Israel Democrats worried that ironclad bipartisan support for Israel is slipping.

"An Ellison win in the race for DNC chair would reflect the Democratic base’s positions on Israel—and perhaps spell an end to the days when voicing concerns over Israeli conduct could doom political careers."

Days after the 2016 election, Bernie Sanders fired off an e-mail to his supporters urging them to support Minnesota Democrat Keith Ellison for Democratic National Committee (DNC) chair.

But then pro-Israel figures and groups, like major Democratic Party donor Haim Saban, the Simon Wiesenthal Center and Anti-Defamation League, stepped in. They raised questions about Ellison’s past ties to the Nation of Islam. They disapproved of his willingness to criticize Israel. And in doing so, they gave credence to a right-wing campaign designed to paint Ellison as an anti-Semite, despite the Congressman’s close ties to the Minnesota Jewish community and support from Jewish groups like J Street and Jewish Voice for Peace. Suddenly, what looked like an easy choice for Democrats had devolved into a proxy fight over the party’s position on Israel.

DNC heads have little to do with formulating the party’s positions on foreign policy issues. But Ellison’s rise touched a nerve among pro-Israel Democrats worried that ironclad bipartisan support for Israel is slipping amongst the party faithful. To them, an Ellison victory would mean that the Democratic Party was closer to turning its back on unabashed support for Israel.

“There are changing opinions amongst Americans and amongst Democrats about Israel/Palestine,” said Rabbi Joseph Berman, government affairs manager for Jewish Voice for Peace.

Berman pointed to a recent Brookings Institution poll showing that 60 percent of Democrats support economic sanctions against Israel over its building of settlements on Palestinian land—a number that has increased 11 points since last year, when the same question was asked.

“There’s a divide between [those numbers] and where members of Congress are at,” he added, and predicted the number of Democrats who support such action would increase in coming years.

A lonely voice on Palestine

Ellison’s past ties to the Nation of Islam were contested when he first ran for Congress, in 2006. He helped organize a delegation to the 1995 Million Man March, a gathering in Washington, D.C. led by Nation of Islam leader Louis Farrakhan, who has repeatedly made anti-Semitic remarks. Ellison has since apologized for his defense of the Nation of Islam, writing to a Jewish group during his run for Congress that the Black Muslim group was “anti-Semitic, and I should have come to that conclusion earlier than I did.”

Ellison’s flirtation with Black nationalist politics did not follow him to Congress. He is hardly a radical on Israel. He has repeatedly voted in favor of U.S. military aid to Israel, and supports a two-state solution to the conflict. But Ellison has criticized Israel’s blockade of Gaza for the economic devastation it has wrought on the coastal territory, and signed a letter to President Barack Obama raising concerns over how Palestinian children “live under the constant fear of arrest, detention, and violence at the hands of the Israeli military.”

He has also come under criticism for his 2014 vote, during the war in Gaza, against additional funding for Iron Dome, the Israeli anti-rocket system. At the time, he explained his vote by saying that a cease-fire is the best route to protecting civilians on both sides—and that a vote for Iron Dome only expressed concern for Israeli civilians.

Laila Abdelaziz, a Palestinian-American and the Tampa Bay regional director for the Florida Young Democrats, has gotten to know Ellison in recent years, and says the Congressman has taught her a lot about politics and community organizing.

In an interview with In These Times, she praised Ellison for providing “an office in the halls of power, in Congress, in Washington, D.C., for Palestinian rights activists, and for Palestinian rights campaigns to have access to people that they otherwise wouldn’t have access to.” She pointed to how Ellison hosted Tariq Abu Khdeir, the Palestinian-American teenager beat by the Israeli police in 2014, on Capitol Hill, and how a photograph he posted on Twitter showed a sign in the occupied West Bank city of Hebron reading: “Caution: This was taken by Israel. You are entering apartheid.” (The photo was a reference to a street in Hebron that Palestinians are barred from walking on.)

“I can’t point to any other member of Congress that would be willing to do that,” she said.

It’s this willingness to deviate from Congressional norms on Israel, a state that receives overwhelming support from across the political spectrum, that has pro-Israel groups worried. Abdelaziz said that Ellison’s views on Israel—which she said reflects the views of many Democrats—are “seen as a threat to the very large cohort of Zionist donors” that fund the party.

The Israel lobby steps in

The controversy over Ellison reached its height when, on November 29, the Investigative Project on Terrorism, a group run by the anti-Muslim activist and writer Steven Emerson, released audio of Ellison at a 2010 fundraiser.

The Anti-Defamation League, which had previously expressed qualified support for Ellison, released a statement in response to the recording, saying that Ellison’s comments were “deeply disturbing and disqualifying,” and that they raise “age-old stereotypes about Jewish control of our government.” The next day, Saban told a forum on U.S.-Israel relations that Ellison was “clearly an anti-Semite and anti-Israel.” He added: “Keith Ellison would be a disaster for the relationship between the Jewish community and the Democratic Party.”

The firestorm over Ellison recalls past controversies over Israel. In March 2009, Chas Freeman withdrew his name from being considered for the National Intelligence Council. The withdrawal came after pro-Israel groups and politicians harshly criticized Freeman for his comments on Israel, like his statement, in a 2006 speech, that “with each decade, Israel's behavior has deviated farther from the humane ideals of its founders.”

But this time, despite Saban’s intervention, there is little indication that Ellison will be forced out of the DNC race. Sen. Schumer, a stalwart supporter of Israel and the incoming minority leader in the Senate, has maintained his support for Ellison, and the Minnesota Democrat announced he would step down from Congress to run the DNC, removing another area of concern for the party. An Ellison win in the race for DNC chair would reflect the Democratic base’s positions on Israel—and perhaps spell an end to the days when voicing concerns over Israeli conduct could doom political careers.