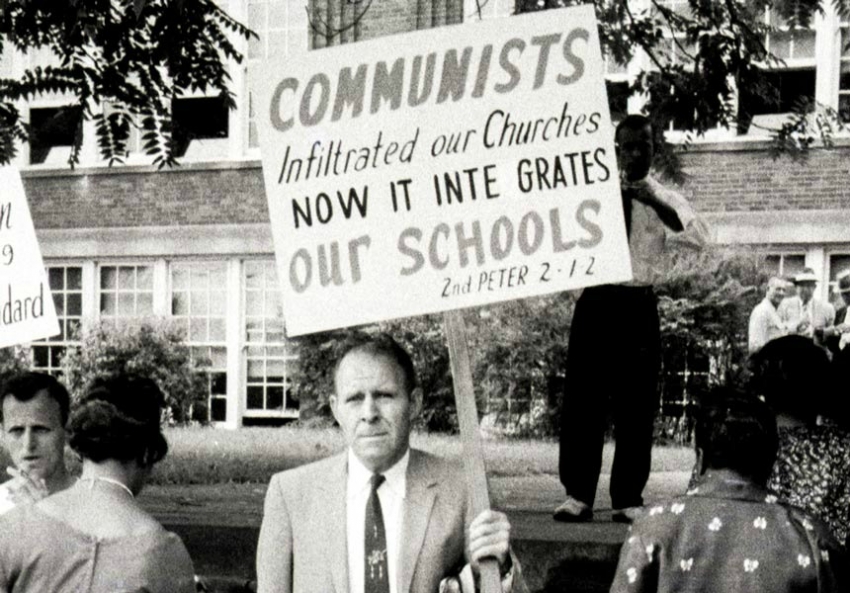 The history of Koch-style libertarian economics is steeped in racism.

The intellectual theorists of white race privilege recognized that such head-on confrontations wouldn’t protect the old Jim Crow order for long. The problem was democracy itself: American opinion was turning against Southern racism.

Democracy often comes down to honest math. After the 1965 passage of the federal Voting Rights Act, 20th century America seemed to be on a path toward the democratic ideal of  “one person, one vote.” Yet the 21st century has seen enormous reversals of this hard-won progress. Not only have two oligarchic GOP presidents been elected without the popular vote, but crude efforts to suppress ballot access at all levels have become commonplace.

What set the machinery of formal democracy lurching backward so dramatically? In Democracy in Chains: The Deep History of the Radical Right’s Stealth Plan for America, Nancy MacLean traces the origins to the backlash against Brown v. Board of Education. White supremacists vowed “massive resistance,” with Virginia’s Prince Edward County going so far as to shutter its entire public school system for several years.

But the intellectual theorists of white race privilege recognized that such head-on confrontations wouldn’t protect the old Jim Crow order for long. The problem was democracy itself: American opinion was turning against Southern racism.

That’s where the intellectual antihero of MacLean’s book, James Buchanan, comes in. A Tennessee-born free-market fundamentalist who chaired the economics department at the University of Virginia (UVA), Buchanan launched a new center of political economy at the school in 1956 to break “the powerful grip [of ] collectivist ideology.”

In 1959, the fire-breathing libertarian theorists at UVA thrust themselves into the heart of Virginia’s desegregation battle by proposing a now-familiar libertarian ploy: privatization of the state’s public schools. The proposal elevated racial discrimination into a neutral-sounding quest for economic efficiency. The market would see to inequalities via the logic of parent choice; it was simply a matter of “letting the chips fall where they may.”

This was unalloyed bullshit, of course. Given the generations-old imbalance of wealth and power between the races, any laissez-faire approach to compliance with Brown  would inevitably reinforce racial inequalities. The state assembly eventually voted down the radical plan, but as MacLean notes, the underlying logic has since burrowed into nearly every facet of our madly privatizing public life—from the Flint water crisis to the attacks on Wisconsin’s public unions—in “a stealth bid to reverse-engineer all of America, at both the state and local level, back to the political economy and oligarchic governance of midcentury Virginia, minus the segregation.”

A major force behind this transformation was the libertarian true believer, oil baron and megafunder Charles Koch. When Buchanan launched another hard-right institute at George Mason University, then a backwater suburban commuter school, in 1982, Koch’s largesse helped bulk it up into a conservative intellectual bulwark. Buchanan and his Mason cohorts minted a new generation of ideological foot soldiers who led the libertarian Right in a steady antidemocratic and oligarchic drift.

After Buchanan had a falling out with Koch in 1998, the hack libertarian economist Tyler Cowen kept hammering away at the Buchananite gospel from his perch atop George Mason’s Koch-funded Mercatus Institute. “The freest countries”—in the laissez-faire sense—“have not generally been democratic,” Cowen wrote in a 2000 essay, citing as exemplars of freedom Augusto Pinochet’s Chile (whose plutocratic constitution was essentially ghostwritten by Buchanan), Singapore and Hong Kong. The hard truth, therefore, is that “if American political institutions render market-oriented reforms too difficult to achieve, then perhaps these institutions should be changed.”

For starters, Cowen suggests, “the weakening of the checks and balances” in the U.S. constitutional order “would increase the chance of a very good out-come.” What constitutes a very good outcome? Nothing less than a wholesale “rewriting of the social contract,” with “worthy individuals” elevating themselves up the social ladder and the less fortunate consigned to shantytowns. “Get ready,” he counsels.

As well we should. One way would be to use MacLean’s excellent exposé to help mobilize an energized small-D democratic electorate. It’s long past time to smite the libertarian Right with a kind of math that can’t be bought.