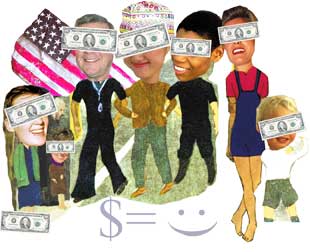 Call it the curse of class unconsciousness. Against all evidence to the contrary, most Americans imagine they could and should be rich, that any day now their ship will dock in the port of great fortune.

And it has always been thus. Writing in the mid-1840s, Alexis de Tocqueville marveled at the loony “courage” of Americans, who repeatedly gambled their all on financial gain, “almost insensible to loss” and instantly prompted to fresh exertions.

Born Losers, Scott A. Sandage’s splendid history of the “misfits of capitalism” explores how 19th century America dealt with its own culture of irrational exuberance by locating the reasons for failure “in the man,” as Ralph Waldo Emerson asserted, rather than in the wild careening of a winner-take-all, laissez-faire economy.

This despite ubiquitous evidence of rack and ruin. Every couple of decades brought a new panic, five in one century. “The land stinks of suicide,” Emerson confided to his journal during the Panic of 1837, expressing relief that, having given up the ministry, he would not have the hopeless task of consoling the broke and broken multitudes. Hard cash was so scarce that people minted their own copper “hard times tokens.” International opinion condemned the young Yankee nation, from the president on down, as “a fraudulent bankrupt.”

In “Life Without Principle,” Henry David Thoreau’s sardonically-titled essay, Emerson’s refractory friend described how contemporary mores pushed people into deluded pursuit of profit: “If a man walk in the woods for love of them half of each day, he is in danger of being regarded as a loafer; but if he spends his whole day as a speculator, shearing off those woods and making the earth bald before her time, he is esteemed an industrious and enterprising citizen.” Still, when Thoreau died in 1862, Emerson eulogized him as a failure, albeit beloved: “He seemed born for greatness … and I cannot help counting it a fault in him that he had no ambition.” Far from being a captain of industry, Thoreau had sought merely to become “captain of a huckleberry-party.”

Like present-day neocons, Jacksonian pundits envisioned every white man a free agent, the engineer of his own financial fate. Jurist Lemuel Shaw, the father of contract law, claimed that nobody failed who ought not to fail. Shaw’s son-in-law Herman Melville parodied this faith in free agency in Bartleby the Scrivener: When Bartleby, a lowly law clerk, credulously asserts independence, repeatedly declining assignments with a polite “I would prefer not to,” the office is thrown into chaos and it’s clear that poor Bartleby is both crazed and doomed.

Hucksters reigned supreme within this realm of free enterprise. Showman and con artist P.T. Barnum, the Donald Trump of his day, rebounded from bankruptcy to lecture on “The Art of Money-Getting, or Success in Life.” Success demonstrated inherent superiority just as failure exposed infirmity. Preaching the “Gospel of Wealth,” Andrew Carnegie praised unbridled competition as “best for the race, because it ensures the survival of the fittest.”

Character was newly conflated with creditworthiness. The Mercantile Agency, the direct ancestor of Dun & Bradstreet, operated a vast secret surveillance network that sought to report on everyone in business, tracking entrepreneurs as they traversed the country in search of fresh starts and new opportunities. And as business increasingly involved commerce among strangers, 19th century Americans eagerly adopted scientific strategies to fix the identity and character of the unknown other. The new technologies of daguerreotypy and phrenology promised that character could be immediately captured and decoded through photos revealing the shape of one’s head.

Today, we too have our false prophets of junk science. In American Mania, psychiatrist Peter C. Whybrow, director of UCLA’s Neuropsychiatric Institute, professes to have discovered a biological basis for the excesses of U.S. capitalism. Whybrow says that America is a country of migrants, that migrants are genetically predisposed to take risks, and that the high produced by deal-making creates addictive behavior and mania. Mutant genes, or alleles, dictate our body chemistry turning us all into “stress junkies” and suckers for get-rich-quick schemes. Collectively, we’re a nation of easily hijacked dopamine reward receptors, he says. The dopamine makes us do it.

One need not dismiss genetics to recognize Whybrow’s thesis as elaborate hokum. His footnotes tacitly acknowledge that his “science” extrapolates from small, speculative and inconsistent studies. There’s no readily replicable link between his beloved D4 dopamine receptors and impulsivity, let alone the complex behaviors of ordinary workaholics, Internet investors or the Kenneth Lays and Sam Waltons of the world. And common sense contradicts his bizarre biology-based brand of American exceptionalism, his claim that we are uniquely bred for invention and enterprise. If migration thus explained national character, Canadians would be reckless adventurers.

Yet the good doctor’s book has met with significant acclaim from a new age semi-progressive crowd, who welcome his prescription for a more touchy-feely kind of capitalism, one moderated by the knowledge that too much deal-making might make you sick. Whybrow presents us with the saga of Tom, who spent the ’80s as a “turnaround artist” employed by big banks to fix the supposedly ailing companies whose takeovers they financed. Tom had led a 24/7 adrenalin-fed existence, estranged from family and addicted to deals that gave him the same rush as sex. Whybrow bemoans poor Tom’s past unhealthy condition, gracefully sidestepping any concern for the multitudes he must have fired.

Instead, he celebrates the new and improved Tom, who now hawks rehabilitation centers for stressed-out executives. Whybrow quotes with approval Tom’s sales shtick, characterizing the seductive power of America’s laissez-faire mass markets as “the greatest pleasure-generating machine the world [has] ever seen,” though unfortunately one with “no published instructions for optimum use.” Tom’s mission: To protect frazzled high-power execs from burnout by teaching them “how to play the casino without getting hooked.” Proudly, Tom promotes an in-the-moment philosophy of “mindfulness”—allegedly rehabilitated, he’s now an entrepreneur who turns his cell phone off at night.

Alas, the nostrums of American Mania serve to obscure real ills. Whybrow implicitly conflates everyone who’s overworked and out-of-touch with the movers-and-shakers of corporate America, presenting us all as hapless victims of our genes, flattering those at the bottom while absolving those on top of moral responsibility for their actions.

There is indeed an “American mania” and it is a deluded conviction of individual agency, oblivious to the constraints of class and structural inequality. Sandage’s thoughtful history places our disorder in context while Whybrow’s insidiously bad book feeds the fever.