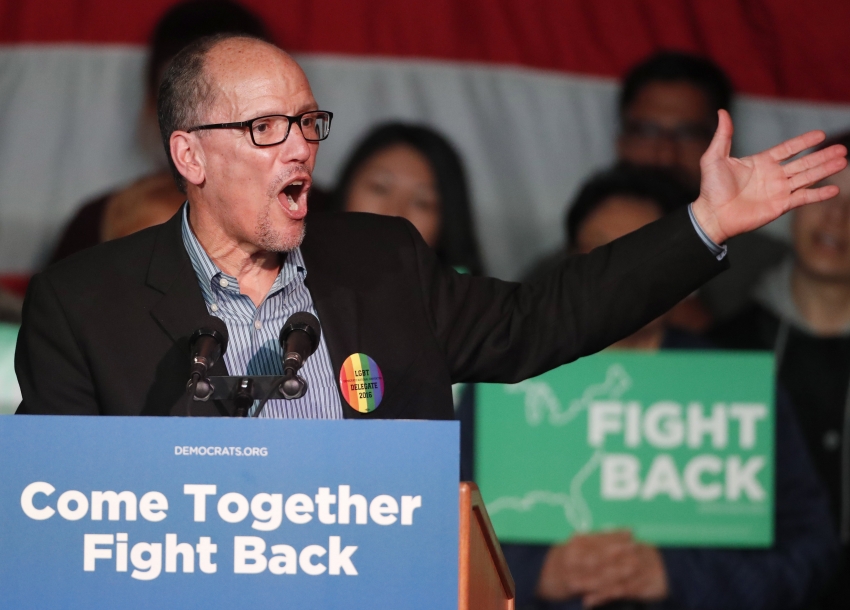 It’s Still Their Party: What the DNC Purge Means for the Democrats’ Left Flank

By removing Ellison and Sanders backers from DNC leadership, the Democratic establishment is ruthlessly tightening its grip on the party. Progressives should take a lesson.

For all the talk of party unity and compromise, the Democratic establishment has shown time and again that it knows exactly is at stake in the current contest between the party’s progressive and corporate wings, and that it will always act with sufficient ruthlessness to maintain its hold over the party.

Ever since the 2016 presidential primary, “unity” has been the watchword of Democratic Party politics. As soon as it became apparent that Hillary Clinton had clinched the nomination, establishment Democrats warned the party’s grassroots that the stakes were now too high for intraparty bickering. In that spirit, at the Democratic National Convention, a Unity and Reform Commission was established to help bridge the rift between the Sanders and Clinton wings of the party.

Yet, at its meeting last week in Las Vegas, the Democratic establishment, under the leadership of Democratic National Committee (DNC) Chair Tom Perez, demonstrated yet again that for all its vaunted talk about “unity,” it remains committed to relegating Berniecrats and other progressive Democrats to the margins.

At that meeting, Perez ousted from leadership positions four long-serving officials who represent the so-called “Sanders wing” of the Democratic Party. These officials all had backed Minnesota Rep. Keith Ellison over Perez, the Obama Administration labor secretary who had previously been elected to a seat on the Montgomery County Council in Maryland, in the tussle over the DNC chairmanship.

The list includes Ray Buckley—the New Hampshire Democratic Party’s chair since 2007—who was kicked off the DNC rules committee, longtime party secretary Alice Germond who was removed from her at-large appointment to the DNC, and James Zogby, the president of the Arab American Institute and outspoken critic of Israel, who has been taken off the resolutions and executive committees. While removed from their committee seats, Buckley and Zogby remain on the DNC.

Perez has attempted to prevent the change-up from looking like a wholesale purge. He appointed Larry Cohen, chair of the Sanders-backed Our Revolution PAC, to an at-large position, along with Bernie Sanders’ former press secretary Symone Sanders and a number of high-profile union leaders. And both Ellison and Royce West, an Ellison backer, have joined the executive committee. Still, these are relatively minor gestures when compared to the unceremonious removal of long-serving, Ellison-supporting figures from key roles.

It’s also clear that those who were removed view the move less charitably.

“There’s a lot of upset about the people who were appointed, and I am, too,” Zogby told Vox.

Buckley called it “very disappointing.” Germond, who had served on the DNC since the 1980s, told Vanity Fair that she had been “left out in the cold without even a call from the chairman” despite serving on the DNC for “forever,” a state of affairs she called “quite unusual.”

Perhaps even more importantly, the DNC’s powerful Rules and Bylaws Committee, which determines how party primaries are run, is now heavily weighted against the Sanders wing. It is the Rules and Bylaws Committee that will first consider the recommendations made by the Unity Reform Commission that has been meeting this year, prior to a vote on the recommendations by the whole DNC.

“Not a single person from the Bernie camp is in the new bylaws groups, but five people from the Clinton side are,” said Zogby in Vox.

Indeed, of the 30 names on the Rules and Bylaws Committee, 11 have worked for Clinton in the past, either as staffers or surrogates on her 2016 and 2008 campaigns. Among them is Jeff Berman, a former lobbyist for the Keystone pipeline who was being paid by Clinton’s campaign for work on delegate-counting strategy at the same time he himself was a superdelegate. Also included are veterans of Bill Clinton’s administration, such as Elaine Kamarck and longtime Clinton operative Harold Ickes.

Seven members of the Rules and Bylaws Committee were pro-Clinton superdelegates in the primaries, and nearly all endorsed Clinton in the primary. Some who didn’t officially endorse Clinton, such as former Deputy Labor Secretary Chris Lu, were early donors to her campaign.

The list also includes Donna Brazile, who notoriously used her position at CNN in March 2016 to feed debate questions and topics to the Clinton campaign in advance, an interesting choice for a committee that focuses on “rules.”

Prominent union officials appointed to the committee have also been big Clinton boosters, such as AFSCME president Lee Saunders and AFT president Randi Weingarten, who was a Clinton surrogate in all but name and promised to “go after” National Nurses United for its early endorsement of Sanders, but who backed Ellison over Perez for chairman of the DNC. The closest one gets to a Sanders backer on the Rules and Bylaws Committee is Indiana Democratic Party Chair John Zody, who was publicly uncommitted.

The new batch of superdelegates appointed to leadership positions at the DNC includes a number of lobbyists, including Joanne Dowdell, who lobbies for Rupert Murdoch’s News Corp., and Manuel Ortiz, who counts Citigroup as a client.

A history of slights

These are just the latest in a series of ongoing slights by establishment Democrats toward the party’s “Sanders wing.” Not long after the deselection of Ellison’s backers, California Democrat Bob Mulholland—a Clinton supporter during the primary—put forward a resolution urging Sanders to join the party, arguing that the Democratic Party should be controlled by Democrats.

“Sanders runs around the country screaming at people to adopt his policies,” Mullholland told The Hill. “The least the DNC can do is urge him to run as a Democrat in 2018 in the era of Donald Trump.”

That resolution was defeated in committee.

Earlier in October, Perez appointed Dan Halpern, an opponent of raising the minimum wage, to the DNC’s finance committee, and has resisted the push among progressives in the party to back a Medicare for All healthcare system as a flagship policy. To be sure, such impulses aren’t unique to Perez: back in June, California Democrats in the legislature blocked a single-payer healthcare bill that had been supported by grassroots advocates in the state.

In fact, Perez’s chairmanship of the DNC itself is an ever-present rebuke of the party’s left flank. Perez was recruited specifically by former President Obama to “stop the the Sanders wing of the party from taking over,” as one Obama administration official explained to Andrew Cockburn. Ellison had once been the obvious choice for the DNC chairmanship, endorsed by both left-wing and centrist Democrats, before Perez joined the race.

Soon after, stories began appearing that brought up Ellison’s past association with Louis Farrakhan and the Nation of Islam. Ellison was derided as a “lackluster black Muslim,” and hit with the none-too-subtle insinuation that he still carried the group’s anti-Semitic attitudes. Democratic megadonor and Mighty Morphin’ Power Rangers mogul Haim Saban declared Ellison “an anti-Semite and anti-Israel individual,” while the Anti-Defamation League decided that Ellison’s comments claiming Israel has a disproportionate influence on U.S. foreign policy were “disqualifying.”

Others took a different tack. “There’s too much at stake for us not to have somebody working in a full-time capacity,” Michael Blake, an Obama campaign veteran, told the New York Times, echoing Perez’s own words on the subject. The criticism suggested that Ellison’s job as a sitting Congressman meant he would be unable to devote his full attention to the DNC chair role. Six months into his tenure heading the DNC, Perez took on a side-gig at Brown University.

As DNC chair, Perez’s performance so far has been less than stellar. Fundraising numbers have plummeted to dire lows, Perez was booed by crowds on his and Sanders’ unity tour in April, and even mainstream Democrats are already complaining about his leadership.

But perhaps that was never the point. As Alex Lawson, executive director of Social Security Works, characterized it back in February, prior to the DNC election, Perez’s victory would send a message to unions and the grassroots that “their voices, their muscle, their enthusiasm, and turnout doesn’t matter.”

The Sanders wing could field the ideal candidate in Ellison, someone who added to the party’s diversity, had a proven track record, and was acceptable to the party’s centrists—and the party establishment would still ensure he lost, simply because they could.

You can trace such slights against the party’s left flank back to 2016, when the DNC made a series of now infamous attempts to halt Sanders' momentum during the primaries.

For all the talk of party unity and compromise, the Democratic establishment has shown time and again that it knows exactly what is at stake in the current contest between the party’s progressive and corporate wings, and that it will always act with sufficient ruthlessness to maintain its hold over the party.

Progressives should take note and follow the establishment’s lead. To repurpose a famous saying, a well-behaved grassroots seldom makes history.