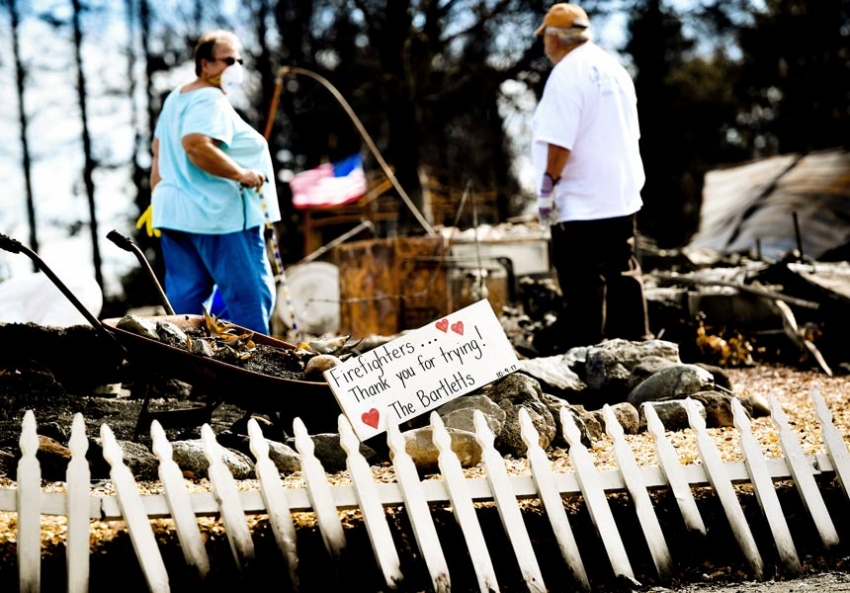 Joanne and Byron Bartlett search the remains of their burned house in Santa Rosa, Calif., on October 20. (Josh Edelson/AFP/Getty Images)

The Personal Is Not Always Political

The problem with the media’s individualistic response to collective tragedy.

Even as the media revels in the suffering of everyday citizens at various sites of carnage, the community is presented as weak, absent or feckless.

It took me awhile to detect the common thread in nearly everything I was reading, watching and hearing. The Las Vegas massacre; hurricane devastation in Texas, Florida and Puerto Rico; Ken Burns’ Vietnam series; Christopher Nolan’s Dunkirk; NPR’s StoryCorps; the California wildfires—whatever the story, I was left with more or less the same message and the same feeling. The world out there is harsh, even tragic, but we can best understand and cope with it through the richness of intimate personal relationships.

The master narrative for disasters befalling American communities is remarkably consistent. An outside force—be it a madman or a storm—exacts a terrible toll on innocent, ordinary people. Following the harrowing event itself, attention shifts to the victims: the identities of the dead and wounded, the struggles of the survivors, the rebuilding of fractured lives. CNN’s Anderson Cooper radiates sympathetic concern as he says, “I wish you peace and strength in the days ahead.” The commentators marvel at the grit and spirit of cooperation emerging from the wreckage. The “best” in humankind, we are told, regularly emerges from the “worst” of situations. The “unity” of the American people, likewise, seems most clearly to emerge when we are sundered apart by an enemy—whether human or geophysical—beyond our capacity to control.

When it comes to responses to adversity, this coping economy of sympathy and healing seems to always take precedence over more searching examinations of cause and effect. As a result, there is little time or energy left in the public sphere for consideration of collective measures for long-term relief. The policy alternatives for removing guns from the hands of potential mass murderers involve a messy discussion that few political or lay leaders want to have. Restricting development on U.S. coastlines or sharply reducing carbon emissions not only runs counter to Republican and Trumpian orthodoxy, but is deemed too esoteric for audiences wedded to stories of raw emotion. Far better to take solace in the “heroes” of the storms: the neighbors helping neighbors, alongside the valiant first responders, yes, always the first responders.

Nor is the avoidance of larger lessons apparent only in the period of initial shock. Even when the question of “cause” or “blame” is broached, the response is usually too cacophonous or politically controversial to pursue. A recent Denver Post column thus rejected any international comparisons of gun laws, post-Las Vegas, on the grounds that “preoccupation with gun laws or culture lets the killer off the hook.”

Ken Burns and Lynn Novick’s 10-part, 18-hour excavation of the Vietnam War, released in September, is a case in point. It is not that the Burns/Novick documentary camera lacks a critical an- gle. The series is notable as an uncompromising exposé of the political and military misdeeds, including outright lies, of the country’s leadership class. Its “humanization” of the war, moreover, both offers a perspective from the lesser ranks of U.S. fighting forces and introduces us in a respectful way to the extended travail of our Viet Cong and North Vietnamese enemy. Yet instead of drawing any larger lessons—especially for a country still bristling with bases and the will to impose our techno-military superiority in any perceived hotspot—the producers retreat into the personal and the therapeutic. By way of understanding, the best we can hope for, they suggest, is appreciation for the valor, and even beloved community, among the soldiers themselves. By highlighting the struggles and humanity of individual characters, from both East and West, this approach not only slights but disdains more sweeping judgments of the action.

Tellingly, the series chooses to represent the anti-war movement with an ex-protester now grieving her once-vitriolic excoriation of returning troops. Whatever its excesses, the anti-war movement was fundamentally not about the troops in Vietnam but the policies and mindset of both conservative Republicans and putatively liberal Democrats that put them there. That the project boasts the Bank of America and David H. Koch among its prime sponsors may explain such political cowardice. I am equally inclined to think, however, that Burns and Novick believe that the personal is all that a mass audience will bear.

Other signs abound that our imaginations have noticeably shrunk when it comes to wrestling with adversity. NPR, for example, now features a plethora of programs—all enticing, all well-produced, mind you—that focus on a personal narrative over analytically deeper exposition. From the venerable This American Life to Snap Judgment, As It Happens and The Moth Radio Hour, our public stewards know we are desperate for engaging characters and extended storytelling. StoryCorps itself, which debuted on public radio in 2003 and has since grown into a nationwide nonprofit boasting over 60,000 interviews in all 50 states, is emblematic of the trend—and the assumptions behind it. The self-description on its website is pitch-perfect: “a candid, unscripted conversation between two people about what’s really important in life: love, loss, family, friendship. When the world seems out of hand, tune in to StoryCorps and be reminded of the things that matter most.”

The same zeitgeist that elevates individual heroism notably neglects the power of the people as a whole to effect change. Indeed, even as the media revels in the suffering of everyday citizens at various sites of carnage, the community is presented as weak, absent or feckless.

Perhaps the apotheosis of such a perspective occurs in the film Dunkirk. Here, a truly heroic communal act, the rescue of a defeated British army from the Normandy shore by a battalion of civilian maritime pilots early in WWII, is transformed into another mass tableau of victimhood. With the director’s emphasis clearly on both the terror and technology of warfare—we learn nothing, for example, about how the flotilla is organized—Dunkirk’s protagonists struggle for mere survival in an atmosphere of doom and gloom. In what I take as a kind of parable for the current view of the democratic public, the leading characters, such as they are, not only have no agency, they can barely speak to each other. The threat they face, moreover—rather than invoking an identifiable fight between fascism and democracy—seems as naturalistic and unaccountable as that affecting those unfortunates caught before an unhinged shooter or a killer storm.

At a time of intense political polarization and grave social peril, why is it, we should ask, that we are awash in stories of a determinedly personal struggle, survival and transcendence? Our culture, as de Tocqueville first famously noted, is hard-wired toward a contradictory mix of selfishness and community-minded voluntarism. Whether we still have the will for serious social inquiry and significant public works remains to be seen.

Originally, the mantra that the personal is political actually registered a broader social critique. Derived from feminist circles, the phrase pointed to a heretofore unacknowledged hierarchy of power in marriage, the family and gendered relationships more generally. Its power still echoes in the LGBTQ movement and serves as a useful check on the internal dynamics of all movements aimed at larger social transformations.

For the most part, however, today’s preoccupation with the “personal” carries an effectively anti-political message. Turning away from the state and larger institutions and seemingly giving up on the hard work required to rebuild a fractured society, we are left feeling cowed and alone. Outside of world wars, the great depressions or natural disasters, the search for individual salvation remains America’s drug of choice.