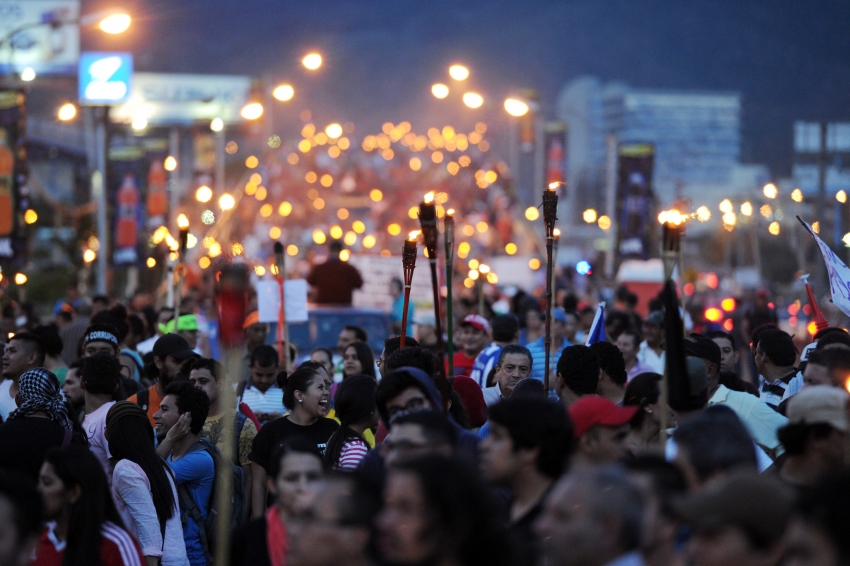 Inside Honduras’ Torch-Lit Marches Against the U.S.-Backed Dictatorship

Thousands are defying military curfew to protest what they say is a fraudulent election.

“The only thing we Hondurans can do is to take to the street.”

Torches lit Tegucigalpa’s night sky, and a cacophony of noisemakers and chants rang out, as hundreds of Hondurans, led by youth, marched to the U.S. embassy to protest alleged election fraud. The demonstration for democracy on Dec. 8 took place amid the worst political crisis to grip the Central American country since the 2009 U.S.-backed coup.

The march was prompted by fears that the election is being stolen for incumbent President Juan Orlando Hernandez.

“We want a change,” 23-year-old Meli Martinez told In These Times while standing in front of the embassy. “We want jobs, and we want security.”

With youth at the forefront, Hondurans desperate for change have protested by the thousands and defied a military curfew to make their voices heard.

“There’s a generalized anger among the youth–fatigue, weariness,” Gabriela Blen, a 29-year-old social leader and congressional candidate, told In These Times.

In recent marches, many young people have carried signs reading, “You messed with the wrong generation.” The declaration, “Out with JOH,” a reference to the incumbent president, has been a rallying cry among protesters of all ages.

Two weeks after election day, results show a lead for Hernandez over Opposition Alliance Against the Dictatorship candidate Salvador Nasralla. But a winner has not been officially declared. The opposition has decried vote tampering and demanded a recount, while international observers from the Organization of American States and a European Union election observation team cast doubt on the results.

“It is evident that there’s fraud,” claimed 25-year-old Cindy Maradiaga, who said she wasn’t part of any political party, as the Dec. 8 march kicked off. “Fraud began when Juan Orlando got the opportunity to seek re-election.”

Opponents slam Hernandez’s bid for a second term as illegal. He justified the move using a disputed 2015 Supreme Court ruling that overturned a constitutional ban on re-election.

“The only thing we Hondurans can do is to take to the street,” Maradiaga added, noting that Hernandez controls state powers, including the Supreme Court, that could otherwise offer recourse. “Juan Orlando cannot be president if the majority didn’t vote for him.”

A tipping point for many, especially urban youth, was the corruption scandal that surfaced in 2015 implicating the governing National Party in an embezzlement scheme that siphoned millions of dollars from the country’s cash-strapped social security institute and allegedly benefited Hernandez’s 2013 presidential campaign. Civil society groups reported close to 3,000 deaths linked to the scam.

The scandal sparked the Indignados movement, which organized 24 weeks of torch-lit marches to demand an end to corruption, the creation of an independent anti-impunity commission and the president’s resignation. The movement’s core demands  remain unanswered.

Blen, a founding leader of the Indignados, said the electoral debacle has been another flashpoint reawakening political consciousness.

As cries of fraud surfaced, unrest broke out across the country. Masked youth faced off on Nov. 29 and 30 against riot cops and military police in Tegucigalpa, setting up barricades that paralyzed the capital. In contrast to the recent torch-lit march’s peaceful atmosphere, scenes from the blockades were charged with tension and clouded with smoke from burning tires and tear gas.

According to the Honduran human rights organization Committee of Relatives of the Disappeared in Honduras (COFADEH), at least 148 people were detained amid the protests on charges of armed robbery between Nov. 30 and Dec. 5. The government blamed opposition supporters for fomenting violence, while the opposition accused Hernandez’s National Party of infiltration to justify a military crackdown.

On Dec. 1, the government imposed a 10-day state of siege, sewing terror as news of brutal military enforcement spread the first night of the curfew. The next evening, people pushed back with noise-making protests known as cacerolazos, banging pots and pans from their doorsteps.

“People needed to break the ice, overcome fear,” recalled Blen, pointing out that youth played a role in spreading the demonstrations through social media.

The crackdown was harsh. Martinez, a member of the university students’ movement that has fought creeping privatization in public education, said military police launched tear gas to disperse her neighborhood’s cacerolazo even though people were in their homes.

“We had children on the terrace,” she told In These Times. “It was terrible. It was illegal.”

According to Amnesty International, military police used “illegal tactics” and firearms to enforce the curfew. At least 14 people have been killed in the turmoil, according to COFADEH.

Despite the repression, Hondurans are determined to protest what they see as the consolidation of a U.S.-backed dictatorship. Youth organizations called for a national strike on Dec. 11 to escalate pressure.

Blen said that if Hernandez is “imposed” as president, which many expect will be the next step in the contested electoral process, the country will not see calm for the next four years.

“I think there are very few options left for youth. One is to migrate,” she said.

“And the youth without much education, without money, without work, who live in neighborhoods where they are easily captured by organized crime—those youth have nothing to lose,” she continued, noting these youth often battle police or spearhead roadblocks. “Those are the youth who will do more radical things.”

The Dec. 8 torch-lit march, organized by the university students’ movement and the Indignados, circulated on social media with the English hashtag #IDontWantToLeaveMyCountry. The theme criticized Washington over foreign policy initiatives like the Alliance for Prosperity, which purports to improve security and stem migration, but in practice exacerbates drivers of migration.

It was a message to Honduran and U.S. authorities that youth want opportunities at home, but are being forced to leave.

The current crisis has roots in the 2009 military coup that consolidated elite power and paved the way for eight years of National Party rule. The coup triggered generalized impunity and lawlessness that allowed organized crime, violence, unfettered neoliberalism and a human rights crisis to flourish.

The U.S. State Department played a diplomatic role in securing the coup, and Washington has tacitly endorsed post-coup governments by pouring more than $114 million in security aid into the country since 2009 despite its poor human rights record. Days after the election, the State Department certified Honduras for additional aid.

Opposition supporters increasingly fear that Washington is poised to embrace Hernandez as president despite the questioned election.

“We are ready to work with whoever wins,” said U.S chargé d’affaires in Tegucigalpa, Heidi Fulton, appearing in a press conference on Dec. 9 beside electoral commission chief David Matamoros. An active member of the National Party, Matamoros is accused of carrying out fraud on Hernandez’s behalf.

Many slammed Fulton’s appearance after relative silence as a show of implicit U.S. support for the contested results.

“We are a sovereign people, we want our voice to be valued,” said Aaron Rodriguez,  participating in another demonstration on Dec. 10 near the presidential palace with a sign rejecting U.S. intervention.

He added that youth will protest “until there is justice” respecting the people’s will.

According to Blen, the current uprising comes after youths’ break from apathy—which stemmed from hopelessness, not political disinterest. Now, young people carry a growing sense of citizen empowerment that they are taking to the streets.

“What’s happening right now will mark the hearts and minds of Hondurans forever—above all, the youth,” Blen said. “This generation has accepted the responsibility of being the generation that will make change.”