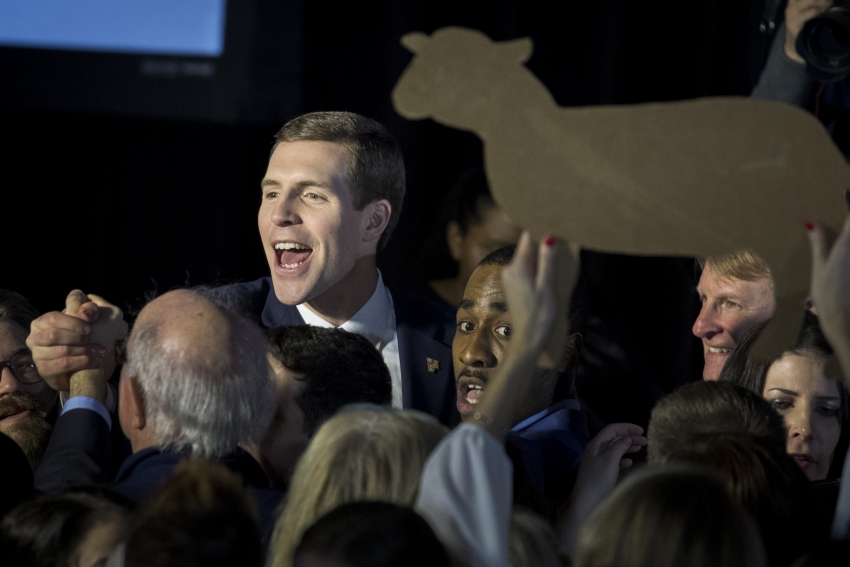 Conor Lamb is not the face of the Democratic Party’s future, but his victory does show that it has one. (Drew Angerer/Getty Images)

Lamb ran as an anti-establishment, labor-backed candidate who defended the welfare state. To keep winning, Democrats will need to embrace a bold, redistributive program.

What does Lamb’s surprise win mean for Democrats? Among other things, it may have just shown that the party will have to abandon neoliberalism to keep winning.

On Wednesday, Democrat Conor Lamb officially claimed a narrow, upset victory for a Western Pennsylvania House seat in a district that in 2016 President Trump carried by nearly 20 points. Like many of the state’s soon-to-be-dissolved districts, Pennsylvania’s 18th was designed specifically to ensure Republican victories. Yet in what will be its last election—thanks to a state Supreme Court ruling in January—the district flipped. Trump won at least 110 other Republican House districts by even smaller margins than PA-18, meaning large swathes of so-called “Trump country” may now be up for grabs. Democrats need to win less than a quarter of those seats in 2018 to take back the House.

That’s bad news for the GOP. But what does Lamb’s surprise win mean for Democrats? Among other things, it may have just shown that the party will have to abandon neoliberalism to keep winning.

A note of caution: Lamb’s victory isn’t an unambiguous sign that out-and-out progressives can sail to victory in areas carried by Trump. A former federal prosecutor, Lamb supports both coal and fracking, is “personally opposed” to abortion (though doesn’t support laws banning it), and rejects both Medicare for All and a $15 minimum wage.

Yet at a time when organized labor faces existential threats at the federal level, Lamb’s heavily union-backed campaign also signals that Democrats running as explicitly pro-labor can win—even in the face of $14 million worth of Republican opposition. Lamb enjoyed hearty backing from Pennsylvania unions, including the United Steelworkers, the United Brotherhood of Carpenters and the United Mine Workers of America, and he ran on bread-and-butter economic issues such as protecting Social Security, Medicare and Medicaid. Unions, in turn, got out the vote against Lamb’s avowedly anti-union opponent, state Rep. Rick Saccone. “Organized labor built Western Pennsylvania, tonight they have reasserted their right to have a major part in our future,” Lamb said in his victory speech. “You have brought me into your ranks to fight with you. I am proud to be right there with you.”

While the president has described him as “like Trump,” Lamb campaigned on a relatively piecemeal economic populism that isn’t premised on Republican ideas at all—and certainly runs against the spirit of just about every economic policy Trump has pushed while in office. Social Security, Medicare and Medicaid are about as close as America’s beleaguered welfare state gets to socialism, and for decades these programs have been defended by progressive Democrats against Republican attacks. Could Lamb have won in PA-18 by campaigning as a socialist? Probably not. But universal, redistributive programs are popular, despite Democrats’ occasional ambivalence about protecting and expanding them.

The Democratic Party has long existed as a kind of coalition, bringing together establishment types like Nancy Pelosi (D-Calif.) and Blue Dogs like Joe Manchin (D-W.V.) with left-leaning progressives like Elizabeth Warren (D-Mass.) and Keith Ellison (D-Minn.). The makeup of this coalition has changed in recent decades. Through the 1990s and early 2000s—as Bill Clinton and other centrists rose to power—there was a credible case to be made that by veering right, Democrats could win elections against the GOP.

So it went that Clinton ended “welfare as know it” and deregulated the banking industry. This neoliberal approach reigned supreme up until the 2008 financial crisis, when cracks began to show. After a severe recession marked by massive job losses and a housing crisis, policy solutions grounded in market fundamentalism lost popularity among the public. The case that an agenda made up of such policies spelled the path to power began to erode, crumbling markedly with Hillary Clinton’s loss in 2016.

In the wake of Trump’s election, fights against repealing Obamacare and passing corporate-friendly tax cuts have become showcases for grassroots energy within and outside of the Democratic Party. At the same time, genuinely progressive policy solutions that have been advocated for years by groups like the Congressional Progressive Caucus (CPC), such as Medicare for All, are gaining popularity. The party’s left flank has long functioned as a kind of ideas factory for Democrats writ large, thanks in no small part to its close ties to social movements and progressive unions. Now, there’s a bigger market for that product.

The recent CPC Strategy Summit in Baltimore was brimming with such ideas, which are enjoying new traction thanks to shifting political winds. Though there’s no consensus as of yet as to what a full-fledged progressive platform might look like, the most recent People’s Budget offers hints in that direction.

The Center for Popular Democracy’s Ady Barkan, who received an award from the CPC for his work organizing against the Obamacare repeal and Trump’s tax plan, suggested the party could pioneer a different way of thinking about spending and budgets. “Democrats were definitely ringing the deficit bell during the tax fight,” he says. “That’s the model we have. Bill Clinton cuts deficits by cutting welfare, among other things… But then George Bush blows up the deficit for his wars and his tax cuts. Barack Obama ties himself in knots trying to be the responsible deficit cutter. First as tragedy, then as farce, now as Donald Trump.”

He adds, “It’s not like guns or abortions or something like that. People don’t give a shit about deficits. You tell them that they can have free healthcare and childcare and infrastructure and they’ll accept that.”

“If I had 5 years of health ahead of me now I would want to launch a campaign to guarantee everyone a good job, and say, ‘If you’re unemployed we’re not going to give you unemployment benefits. We’re going to give you a living wage job taking care of kids, taking care of old people, cleaning the streets, installing solar panels, building public housing, writing plays, singing songs,” Barkan says. In 2016, he was diagnosed with ALS, a degenerative nerve disease.

CPC member and Democratic National Committee Vice Chair Keith Ellison—who is convening a task force on the House’s Medicare-For-All bill, on which he’s now the lead sponsor—even floated the idea of a maximum wage to journalist Sarah Jaffe. “This idea that you can leave people in poverty as you are stacking up dead presidents like nobody’s business has got to come to an end,” he says, referencing corporate CEOs. “You can open a company. You can make a profit. By why do you have to make more than 21 times as much as average worker? Where did you get that damn greedy, and how did you create a philosophy to protect your greed?”

From the event’s main stage on Friday, Rep. Pramila Jayapal (D-Wash.) noted that part of the work of arriving at and enacting a progressive agenda requires dedicated institution building, and strengthening the intellectual infrastructure, like think tanks, that informs the kind of proposals policymakers introduce. “We’ve seen the Right build infrastructure in colleges and institutions around the country,” she said. “How do we build that infrastructure for ourselves?”

Lamb’s victory says as much about politics as it does about policy. He won, in part, by treating the Democratic Party’s current leadership as a burden. Lamb notably distanced himself from House Minority Leader Nancy Pelosi (D-Calif.), saying he wouldn’t support her for leadership should his party take the House later this year. “I think it’s clear that this Congress is not working for people…I think we need new leadership on both sides…people are ready for a new day,” Lamb said at a rally in January. He took an even more aggressive tone against Republican House Leader Paul Ryan for his attacks on entitlement programs.

As in Jon Ossoff’s failed bid for Georgia’s 6th district, Republicans tried to tie Lamb to Democratic leadership. In this case—with a candidate willing to criticize that same leadership—it didn’t stick, meaning other candidates might do the same. As Rep. Filemon Vela (D-Texas) told Politico. “Running against Nancy Pelosi is going to help you a lot more than running with her.” Several other Democratic congressional hopefuls are following suit, and disavowing Pelosi’s leadership on the campaign trail.

While certainly partisan in their emphasis, such jabs are less about left versus right politics than about candidates’ relationship to the political establishment. The Democratic Congressional Campaign Committee (DCCC)’s penchant for backing prodigious fundraisers—many of whom are independently wealthy themselves—may well function as a kind of negative feedback loop for Democrats, whereby the party establishment backs the candidates they most resemble: issue-allergic, poll-conscious politicos who may be able to work a black-tie fundraiser better than a canvass or phone-banking shift.

All this could bode well for progressive challengers with an anti-establishment economic platform like Jess King, whose own district—now PA-11—actually became a safer Republican seat following redistricting, even as the new maps are more friendly to Pennsylvania Democrats overall.

If there’s any lesson to be learned from Lamb’s victory, though, it may be that there’s no one-size-fits-all strategy for Democrats as they try to take back the House, despite Jonathan Chait's claim that his win served as “proof of concept for a strategy that could replicate itself across the country.”

Lamb’s race may be a sign of things to come in overwhelmingly white, Republican-leaning districts with a history of high union density, something which could also be a boon for 2018 House candidates like Randy Bryce in Wisconsin and Richard Ojeda in West Virginia, both veterans like Lamb. For Democrats to win big in other kinds of districts this November, though, they will need to both register and turn out young voters and voters of color, who skew strongly progressive on issues ranging from taxes and healthcare to climate change and mass incarceration.

While different appeals will work in different districts, the underlying question now may be whether Democrats have a forward-looking agenda to stand behind, one that will compel voters to come out the polls, particularly around economic issues. There simply isn’t a political constituency for fiscal conservatism outside of both parties’ respective donor classes, as recent political science research suggests. With Republicans holding strong as a party of, by and for the wealthy, the playing field is wide open for Democrats to propose a tangible alternative not just to individual issues but to neoliberal economic orthodoxy as a whole.

Democrats can’t continue on for long as a house divided against itself, with bodies like the DCCC backing establishment-friendly candidates as the party’s activist base shifts against the establishment and toward bold progressive policies. While Conor Lamb is not the face of the Democratic Party’s future, his victory does show that it has one. How bright it will be may depend on how willing the party’s top brass is to accept new ideas and new leaders from its left flank.