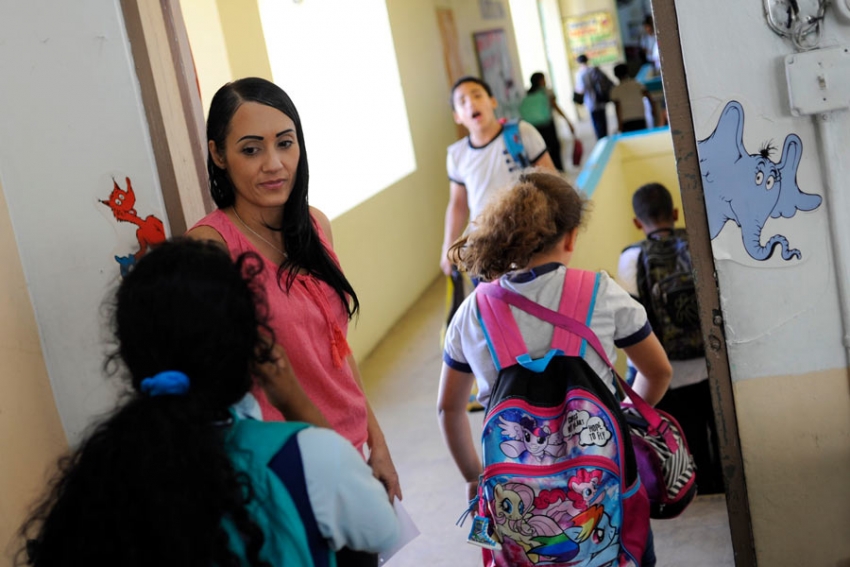 “Emotionally, we are not back to normal,” says San Juan teacher Axamara Pérez, pictured here with her first-graders. (Photo by Bill Healy)

The government’s plan to close 179 public schools and open charters has residents alarmed.

SAN JUAN, PUERTO RICO—It’s Valentine’s Day at Eleanor Roosevelt elementary, and chocolate goodies and Krispy Kreme donuts sit in the back of Axamara Pérez’s classroom. Her first-graders are eager to finish their assignment so they can start the party.

Since Hurricane Maria hit in September 2017, “to get them excited about something, you really have to do a lot,” says Pérez.

It’s almost impossible to forget realities on the island, which include hurricane recovery, a 12-year financial crisis and devastating austerity measures. The island owes bondholders $75 billion, a result of mismanagement and a century under a colonial superpower. To save money, 179 schools have been shuttered, and Puerto Rico Education Secretary Julia Keleher announced in April that a quarter of the 1,100 remaining schools will close this summer.

Morale is low in the Eleanor Roosevelt community, where some students still live without electricity. Letters to parents receive no response, requests for parent-teacher meetings are ignored, homework goes unfinished and teachers feel pressure to keep the school from closing.

“Even though we are trying to get back to normal—emotionally, we are not back to normal,” Pérez says. She has worked at Eleanor Roosevelt for 19 years and is one of the dedicated staff members who have helped keep the school off the closings list. Puerto Rico’s public schools lost 8 percent of their students in the post-hurricane exodus. But Eleanor Roosevelt still has 279 students, well above the threshold of 150 that Keleher suggested could trigger a closure.

Keleher saw in Hurricane Maria what she calls “a real opportunity to press the reset button.” In a sweeping “education reform” plan unveiled by Gov. Ricardo Rosselló on March 29, Puerto Rico is simultaneously opening charter schools. Critics worry the plan will replicate what happened to New Orleans after Hurricane Katrina: With the charterization of that school system, thousands of AfricanAmerican teachers were fired to make way for a predominantly white and inexperienced workforce. Keleher has promised not to lay off permanent teachers, but about a sixth of Puerto Rico’s teachers are on year-to-year contracts. Others worry that their job descriptions will change or they will face long commutes over mountainous roads.

“We are not like books that you move from this school to another school because they need them in another library,” says Noralis Medina, who was transferred when her small public school in Vega Baja closed three years ago.

The education reform plan adds insult to injury for teachers who have seen their pensions repeatedly cut. In an NPR interview, Aida Diaz, president of the Puerto Rico Teachers’ Association, expressed anger that “we are having money taken from our budget” for charters.

Teachers have led a wave of anti-austerity protests and now, anti-charter protests. In a one-day strike on May Day, teachers protesting outside the Department of Education were tear-gassed.

At Ramon Luis Rivera, the only school in the rural town of Juan Asencio, parents voice their concerns about charters almost daily, according to third-grade teacher Militza Ramos Alicea. Enrollment is down and the school is slated for closure. Ramon Luis Rivera has a large special education population, and parents fear their kids will be inadequately served at charter schools, or turned away entirely. They cite reports of mainland charters pushing out low performers.

Ivette Delgado is a retired university professor who does community work in Arecibo, a city of 43,000 with an almost 50 percent poverty rate. She drives past a closed school nearly every day, a reminder of what was once a community pillar. The department has not yet said what charter models will be implemented, but Delgado and others fear that Keleher’s plan is to bring charter operators and teachers from the mainland, cutting out local input and severing the trust built between parents and teachers.

Delgado sees the plan as yet another legacy of colonialism: “We have to ask from down here: What are you doing with the money?”

Hannah Wiley is a reporter in Chicago and a master’s candidate at Northwestern’s Medill School of Journalism.