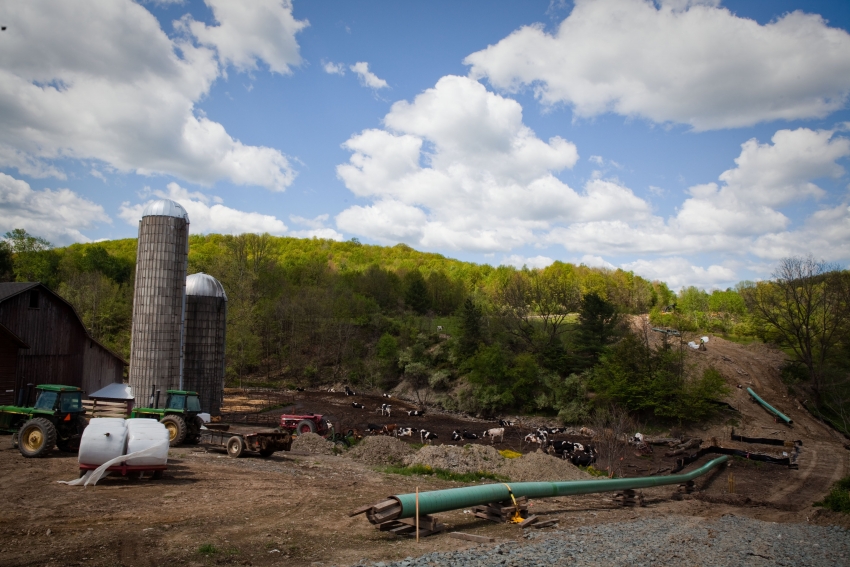 Hydraulic fracturing for natural gas has been controversial, and more communities have began to see the environmental and health-related issues to fracking as outweighing the economic benefits. (Photo by Katie Orlinsky/Getty Images)

15 candidates for state legislature have promised to stop fracking and the construction of pipelines, which are tearing up rural Pennsylvania.

The pro-fracking stance of many elected and appointed officials in PA crosses party lines.

In Pennsylvania, a rush is on to extract gas and other fossil fuels from the Marcellus and Utica Shales. Both Democratic and Republican state officials have been quick to give the green light to the oil and gas industry to drill, frack and build pipelines. But local backlash against pollution, explosions and seizure of property is firing up a new crop of state legislative challengers who vow to stay clean of industry money and put a halt to the gas rush.

Grassroots environmentalist campaign Proud Pennsylvania has collaborated with Food and Water Action PAC to endorse 15 candidates for Pennsylvania Senate and House of Representatives on the November 6 ballot who support a ban on fracking and a moratorium on all new fossil fuel infrastructure. All have pledged not to accept industry money. Twelve of the 15 are women, reflecting the wave of women running for office in 2018.

These races could serve as a test of whether residents of Pennsylvania, like many in the Appalachian region, are tired of seeing their state embrace resource extraction with a high environmental toll.

Since the nation’s first oil well went up in 1859 near Titusville, Pa., dirty energy has been a driver of the Pennsylvania economy. Starting with Gov. Ed Rendell (D) in roughly 2007, Pennsylvania has given the green light to the fossil fuel industry to drain natural gas from the Marcellus and Utica Shales through fracking. The Marcellus and Utica Shales also produce the colorless, odorless, highly explosive Natural Gas Liquids (NGL) used, among other things, to make plastic. Once natural gas and NGLs are extracted, they are moved through pipelines, trains and trucks to ports where they are typically sent to international markets. Sunoco, for example, has repurposed Mariner East 1 (ME1), built in the 1930s to carry gasoline, to carry up to 70,000 barrels daily of NGLs to the Marcus Hook refinery near Philadelphia. Two more Sunoco pipelines in construction, Mariner East 2 (ME2) and ME2X, will respectively increase the carrying capacity of ME1 by 275,000 barrels and 250,000 barrels of NGL daily.

Fracking and the Revolving Door in Pennsylvania, a 2013 report by watchdog group the Public Accountability Initiative, details just how close state regulators and officials are to the oil and gas industry. Governors, legislators and employees of state regulatory agencies—from high-ranking officials down to well inspectors—have consulted for, lobbied, worked for, received campaign contributions from or provided legal services to a wide assortment of fossil fuel companies. Since the creation of the state Department of Environmental Protection (DEP) in 1995, every head of the agency has had ties to the energy industry.

New fracking wells require permission from a variety of regulatory bodies, but they’ve still proliferated. According to the statewide environmental advocacy organization PennFuture, as of late 2016, 10,000 gas wells had been drilled in the state since the boom began in 2007, and permits were issued for another 18,000. In 2017, Pennsylvania was second only to Texas in gas production, with nearly 5.5 trillion cubic feet of natural gas production, primarily from the Marcellus Shale.

The harm to the residents and environment has been enormous. According to research and advocacy organization FracTracker Alliance, federal regulators have logged reports of 108 pipeline “incidents” in Pennsylvania since 2010, including 15 explosions. These incidents have killed eight people, injured 21, displaced 1,118 and caused $67 million in damages. Most recently, on September 11, a fireball from Energy Transfer Partner's Revolution Pipeline destroyed a house in Beaver County, Pa. No one was injured, but residents within a half mile were evacuated and a local school was temporarily closed.

The DEP has given out 60 notices of violation to Sunoco since construction on ME2 began in February 2017. These range from spills of drilling fluids to sinkholes, which environmentalists say is a hazard of drilling and constructing pipelines through karst, an unstable topography found throughout Pennsylvania. Sunoco has simply paid the resultant fines, many of which are so tiny as to amount to a slap on the wrist,  and continued construction. Even the largest penalties, like $12.6 million settlement for what the DEP called “egregious and willful violations,” are a fraction of Sunoco’s $2 billion ME2 budget.

ME2 is not yet carrying NGLs, but ME1 has already had at least three leaks. None have resulted in explosions, according to State Impact, a reporting project of NPR. But if a leak is ignited by something as commonplace as a cellphone, a car or doorbell, these substances can wipe out an entire area, with a blast radius ranging widely due to factors such as weather.

The Pennsylvania Public Utility Commission granted Sunoco the power to exercise eminent domain to develop ME2, leaving landowners with little legal recourse to stop the pipeline from being built across their land. Among those landowners are Ellen and Steve Gerhart, a retired special education teacher and artist, respectively, who own 27 acres in rural Huntingdon County and say Sunoco has spilled 4,000 gallons of drilling fluids in the vicinity of their property. The Gerharts have taken numerous steps, including lawsuits, to protect their home from the devastating effects of resource extraction.

Rolfe Blume of Cumberland County says he has been without clean water since construction of ME2 began on his land in 2017. He and his wife have to go out once a day for a hot meal and can't wash dishes or take a shower at their home without an overwhelming smell of sulfur.

Sunoco did not respond to requests for comment for this article.

A different form of danger

Along with water and health issues, some residents are concerned about the high prevalence of rape around pipeline projects.

Oil and gas companies set up mancamps—temporary campsites with hundreds or even thousands of transient workers, predominantly men—near project sites. Sexual and physical violence and other crimes increased during the Bakken Shale boom, prompting the FBI to set up a permanent field office in Williston, N.D. Joye Braun of the Cheyene River Sioux, whose reservation is close to Keystone XL pipeline, believes that crimes like sexual assault “are tied directly to these extractive industries.” She adds, “Standing up against fracking and tar sands is so much more than just fighting climate change—which we as First Nations feel the effects of right now—it's also about protecting our women and children and Two Spirit Nation.”

Barbara Robinson of Chester County, Pa., who has a pipeline being constructed directly behind her house, says that she doesn't feel safe being in her backyard or pool when the pipeline workers are around. Her 15-year-old granddaughter won't go out either.

The pro-fracking stance of many elected and appointed officials in PA crosses party lines. “When it comes to fracking, the only difference between Republicans and Democrats is that Republicans want to give away our health, safety, and environment; Democrats want to sell those things” by taxing them, says Karen Feridun, a founding member of the Better Path Coalition, an advocacy group that hopes to eliminate fracking and shale gas infrastructure.

Current Democratic Gov. Tom Wolf received $1.5 million in campaign and in-kind contributions from the fossil-fuel industry when he was first elected in 2014. Under Wolf,  the state has moved $24 million from a renewable energy fund to its PIPE program, which makes the money available for grants to institutions to install last-mile infrastructure to facilitate their use of natural gas. In reference to a 2017 report aiming to “enhance Pennsylvania’s opportunities in petrochemical manufacturing,” Wolf said that “Pennsylvania has a once-in-a-generation opportunity to develop and implement a strategy that will cultivate a manufacturing renaissance.”

Not all campaign-finance filings are available for 2018, but Wolf has accepted at least $5,000 from ETP, the company behind the Dakota Access Pipeline and Sunoco’s parent company. ETP has one of the worst safety records in the industry, with spills averaging one every 11 days. The company has also hired private security to surveil and aggressively suppress pipeline activists in multiple states, according to an investigation by The Intercept. In the Gerhart's legal battles with Sunoco, one evidentiary supplement provided by Sunoco Logistics was a detailed surveillance log by Leighton Security. It included physical descriptions of people and vehicles coming and going from the property.

Proud Pennsylvania is not trying to oust Wolf, who’s up for reelection in November. “We have no choice but to reelect Gov. Wolf,” says Judy Wicks, founder of Proud Pennsylvania. “I’m disappointed about his position on fracking, but he is good on other issues that I care about such as public education and woman's rights, and far superior than another Corbett, who was a disaster on all counts.”

Instead, with their endorsements of Pennsylvania state legislative candidates, Proud Pennsylvania and Food and Water Action are trying to assemble a legislature that will truly stand up to industry.

Among their 15 endorsees is Erin McCracken, a Democratic candidate in the 171st District, who has agreed to back a ten percent increase in solar energy production, as well as refusing industry contributions to her campaign and supporting a moratorium on fracking. “It doesn’t matter what your party is,” she says. “There is no denying that climate change is already impacting our communities and our lives, especially our farming communities.”

She’s also concerned about the pipelines contaminating the water supply. “Clean water is something that we all have a right to, and we need to protect that,” she says.

Another matter that may come before the legislature is the question of protest suppression. Pennsylvania’s Senate has already passed a bill, SB652, based on the pro-oil and gas American Legislative Exchange Council’s critical infrastructure bill, which aims to enhance penalties for people who criminally trespass on infrastructure of a “critical infrastructure facility”—which include oil and gas projects. A similar bill in Louisiana has been written into law and several people resisting ETP’s Bayou Bridge Pipeline have been charged with felonies. The bill was recently tabled in the state House.

When asked how she would vote on SB652 if it comes up, McCracken said that she’s “extremely opposed to that. Protest is a part of our First Amendment rights that are non-negotiable. … We need to take it further. We need to provide protection to people who are expressing their opinions.”

Jen Deerinwater is a bisexual, Two Spirit, disabled and mixed-race Tsalagi—a citizen of the Cherokee Nation of Oklahoma. Her website is www.JenDeerinwater.com.