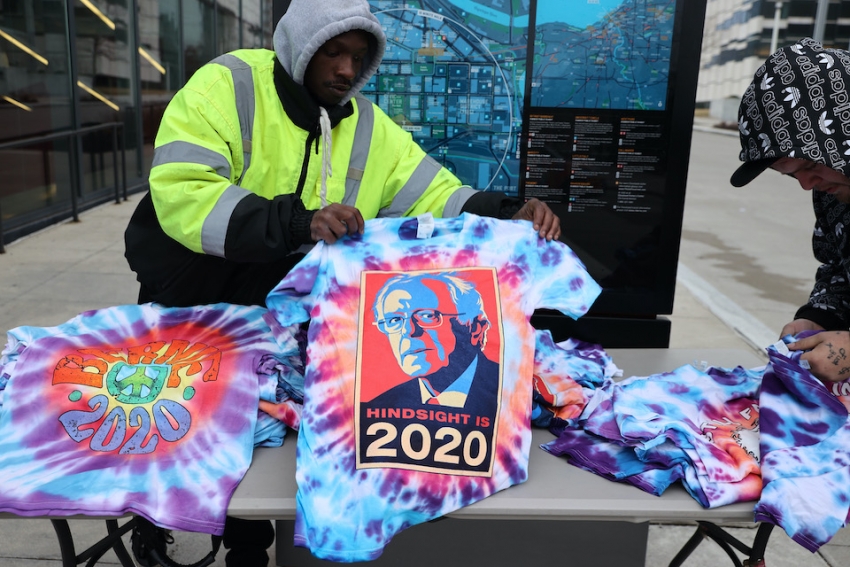 A street vendor attempts to make a sale after Democratic presidential candidate Sen. Bernie Sanders (I-VT) canceled his a March 10 campaign rally in Cleveland due to concerns about COVID-19. (Photo by Chip Somodevilla/Getty Images)

Only if he continues his campaign will the Democratic Party reform movement be able to bring resolutions to the convention floor.

If delegates at this year’s convention fail to make the Democratic Party reforms permanent, we could be back to business as usual—on superdelegates, caucus and primary voting rules, party registration and much more.

Joe Biden supporters would love to hear that Bernie Sanders is dropping out. They ask, what’s the point to continue the campaign in the more than 20 remaining state presidential primaries? Yes, as things now stand, Bernie’s chance of reaching 1,991 delegates are slim. But Bernie should remain in the race for at least one important reason.

All the rules changes that resulted from the 2016 movement to make the Democratic Party more democratic have been written into the rules for the 2020 convention but not for those conventions in 2024 and beyond.

If delegates at this year’s convention fail to make these reforms permanent, we could be back to business as usual—on superdelegates, caucus and primary voting rules, party registration and much more. More than 770 automatic or superdelegates could again be voting on the first ballot for nominating the Presidential candidate, and their early endorsements would be included in news accounts before the first primary. Rules to make any remaining caucus counts transparent and including early voting would be left to the state parties. Rules that require states to welcome the millions of independent voters to join the party would not be mandated.

Without action by the DNC convention rules committee (of which I am a member) the changes we implemented this on the recommendation of the Unity Reform Commission (of which I was vice chair) will, following the convention, be left to the sole discretion of the regular party Rules Committee. That committee is elected by the DNC but without any connection to this year’s primary results. It consists of state party officials and national party operatives. For example, with no mandate from this year’s convention, in 2021, to keep current reforms in place, DNC members would have to vote to strip themselves of their power to vote on the first ballot during the 2024 nominating battle.

This year, superdelegates only have a role in the nomination of the Democratic candidate if no candidate reaches a majority on the first ballot. Without this change, Biden would have had most of the approximately 750 superdelegates before the Iowa Caucus and those numbers would have been flashing on every screen just as they did for Clinton in 2016.

If Sanders stays in the race, he will have enough delegates at the convention to cross the 25% member threshold on both the Rules and Platform Committees. Under current rules, 25% of the committee members can bring a minority resolution to the floor to be voted on by the whole convention. Reaching this threshold is critical. Compromise is most likely when there is reason to do so, so the possibility of introducing a minority resolution is critical to force continuation or expansion of party reforms. If agreement is not reached at the committee level we can proceed to the floor, even if it is a virtual convention.

To achieve this goal, Sanders would need to receive a little more than 15% of the vote in the remaining primaries. He will do far better than that. These additional Bernie delegates are needed to give Sanders leverage with the Biden camp, and his delegates leverage on these committees. This will allow the reform movement to demand that the party continue to become more democratic. It will also allow Sanders’ supporters to insist on the passage of a progressive party platform, rather than acquiesce to the imposition of a false unity that threatens to reverse all we have gained in the past four years. There are critical areas where the platform will matter including a path to single-payer health care, a commitment to end fossil fuel investment and limiting increases in the military budget.

Sanders has other reasons to remain in the race. Biden’s record on trade, healthcare, criminal justice, the fossil fuel industry, Social Security and Medicare are all reasons that unity must be built on real power sharing and nothing less. Power sharing means policy, personnel and party reform. The combination of Sanders' own political leverage and the support from at least 25% of the convention delegates means that Biden will need to negotiate in these areas and not just listen.

In addition, delegate elections in many states also impact party leadership in the state parties. Most of the reformers now leading state parties began as Bernie delegates in 2016.

Views expressed are the author’s. As a 501(c)3 nonprofit, In These Times does not support or oppose any candidate for public office.

Larry Cohen chairs the board of Our Revolution and is a member of the Democratic National Committee, vice-chair of the Unity Reform Commission, and member of the 2020 convention rules committee. He is the past president of the Communications Workers of America and was a senior advisor in the Bernie 2016 campaign.