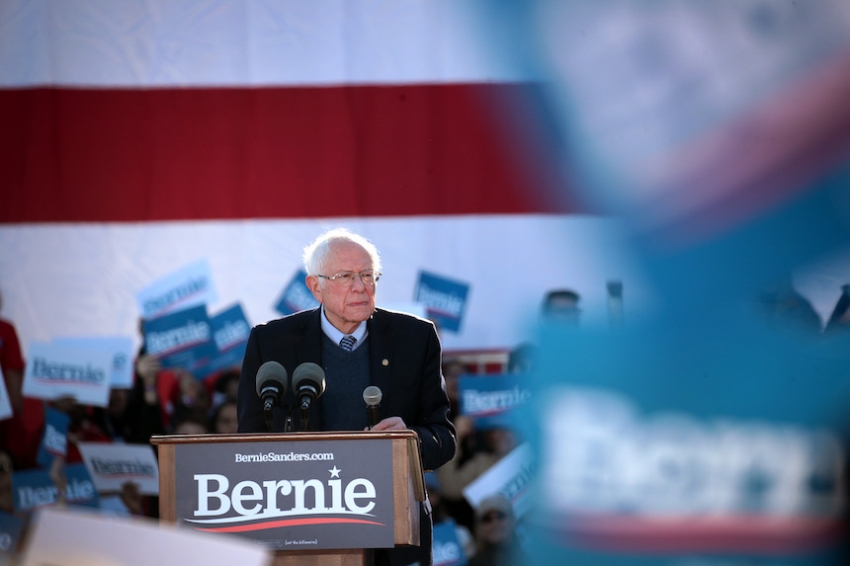 Astra Taylor: Bernie Sanders’ Exit Is an Indictment of Our Broken System—Not His Campaign

Voter suppression was stronger than Bernie Sanders’ voter turnout plan. And the pandemic has made things worse.

It sucks living through a pandemic, especially a criminally mismanaged one. It also sucks to live through an epochal political mistake. Should the stars have aligned differently, Bernie Sanders might have been president. It would have been amazing for a variety of reasons. A Sanders victory, for example, would have totally upended the Democratic Party’s narrative that it is the Republicans who stand in the way of progressive and humane social policy. Centrists Democrats want to play “resistance” to Donald Trump, not a principled left wing, and many of them are no doubt breathing a big sigh of relief.

Sanders’ campaign was remarkable, in part, because he was trying to do two things at once: win the Democratic nomination and strengthen social movements. Leftists have long talked about inside and outside strategies as though they were in opposition, but the Sanders campaign made the argument that they can and must be united, difficult though this process may be. The energy and radicalism of the streets needs to be brought to bear on electoral politics and into the halls of power. That remains the needle the Left has to thread.

I’m pretty sure historians will look back kindly on Sanders. He is the rare honest public servant, and one who ran a campaign centering human dignity. While self-branded as “radical,” in reality his proposals were merely aligned with European social democracy. But given decades of anti-government propaganda and neoliberal economic doctrine, that alignment alone was transformative. Sanders has done more than anyone else to popularize policies including universal healthcare, a living wage, student debt cancellation coupled with free college, a wealth tax, workplace democracy and a Green New Deal. This has put the Left on stronger footing than it has ever been in my lifetime, even if we are not yet where we want to be.

In its own bizarre way, the current pandemic has only bolstered Sanders’ case. The virtue of his core proposition—that working Americans deserve an equitable and functioning welfare state—is becoming more apparent by the day. Reality has endorsed Bernie Sanders, as Keeanga-Yamahtta Taylor has argued, though sadly the endorsement came a couple months too late. His slogan—“Not me, us,”—rings even more true in a period of pathogen-induced social distancing. We are only as safe from disease as our most vulnerable neighbors and even those who are privileged enough to shelter in place are dependent on frontline workers for their survival. Our interdependence is undeniable.

If the timing had been better, COVID-19 might have strengthened Sanders’ hand at the ballot box. Instead, it disrupted and delayed primaries across the country, putting voters in a terrible bind—go to the polls and risk catching (or unwittingly spreading) a deadly illness, or don’t vote at all. (Last year I put out a book called Democracy May Not Exist, but We’ll Miss It When It’s Gone—I had no idea how deeply the title would eventually resonate.)

In the end, Sanders did the honorable thing by bowing out and sparing voters such an agonizing choice. The fact that he was forced to make that decision is an indictment of our broken system, which claims to enable “one person, one vote” while suppressing voter turnout at every opportunity. Our country’s long lines at polling stations, especially in poor and racially diverse communities, have long been symbols of injustice. Now they take on a new, ghastly hue. This election cycle needs to push leftists to engage in voting issues and push the conversation beyond standard liberal talking points like voting-by-mail, automatic voter registration and an end to gerrymandering. We need to talk about safe and secure online voting, turning election day into election month, and more systemic reforms including ranked choice voting, making voting mandatory (as it is in many other developed countries) and experimenting with the use of sortition (random selection of political officials) and citizens’ assemblies.

Sanders’ big gamble was to bank on a boost in turnout among so-called “low propensity” voters—the folks who tend to stay home at election time. Unfortunately, though he earned the overwhelming support of young and diverse voters, this wager didn’t pay off the way many of us hoped. We need to reflect on why this strategy failed while also taking stock of the challenges ahead. In the coming months, electoral participation is likely to be even lower than the typically abysmal rates—something that suits powerful incumbents just fine.

It’s tempting to give up on electoral politics, but that would be the wrong move and would play into the hands of those (Republican and Democrat) eager to see the Left disengage. The Left needs to continue its quest for political power, building on the example of bold fighters like Senator Sanders, Congresswomen Alexandria Ocasio-Cortez, Ilhan Omar and Rashida Tlaib, as well as local politicians such as Durham, North Carolina’s Jillian Johnson and Seattle’s Kshama Sawant. In the coming months we can still get behind inspiring candidates like Nikil Saval who is running for state legislature in Pennsylvania, Cori Bush who is running for the U.S. House of Representatives in Missouri, Jabari Brisport for New York’s state senate and Sandy Nurse for city council in New York City. We need these folks to win now more than ever.

Beating Donald Trump is, of course, imperative. But that doesn’t mean we need to treat Joe Biden with kid gloves. He must make concessions to the Left and earn our votes. An emerging coalition of young movement leaders are already making demands on the Biden campaign, insisting that he adopt a range of progressive policy positions that matter to the younger generation. Their initiative deserves support. The Debt Collective, a union for debtors I helped found, will also be pushing him to commit to canceling all student debt—a move that makes even more fiscal sense given the economic disaster unfolding around us. Biden is already making overtures in this direction, but has further to go and must be pressured.

Important as it may be, making demands of Biden is low hanging fruit. The real takeaway from this primary is that we need to get organized. Our policies may be broadly popular, but it doesn’t add up to much if we aren’t acting collectively and strategically. As longtime activist Yotam Marom recently wrote, “There is no skipping ahead. Elections are not how our people will take power. They will be, when we are strong enough, the expression of the power we have already taken.”

What does that mean in practice? It means we need to band together around our common interests so we can interrupt business as usual and demand concessions. Join or start a union. Find a local Sunrise hub. Start or support a rent strike in your city. Sign up for the ongoing student debt strike. Log on to a local Indivisible meeting. Start paying dues to the Democratic Socialists of America or the Debt Collective. Run for office. As the brilliant labor organizer Jane McAlevey always says, there are no shortcuts to building power for regular people. This is nitty gritty work that has to be done relationship by relationship, day by day.

Like so many others, I didn’t just want Sanders to “change the discourse” or “win the ideological war.” I wanted him to win the election. But I also knew it was an incredible longshot. We’ve made progress, even if we haven’t reached our goal. The fact that his campaign got as far as it did signals a massive sea change. A democratic socialist can win millions of votes in America. A decade ago I never would have believed such a thing to be possible, and that’s our new foundation to build from.

History will look back kindly on Sanders. The question is how generations to come will look back on the rest of us—the “us” of the Sanders campaign’s rousing slogan. Let’s make the future proud.

Views expressed are the author’s. As a 501(c)3 nonprofit, In These Times does not support or oppose any candidate for political office.

Astra Taylor is a co-founder of the Debt Collective, the director of the film What Is Democracy? and the author of Democracy May Not Exist, but We’ll Miss It When It’s Gone.