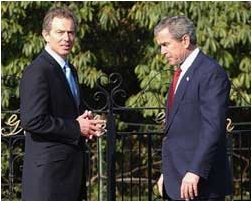 President Bush in Ireland for a photo-op with Tony Blair. The peace process there quickly faltered.

Could the troubles return to Northern Ireland?

BY Kelly Candaele
Share TweetReddit0 EmailPrint
Belfast, Northern Ireland—In early April, President George W. Bush did British Prime Minister Tony Blair a favor by flying on short notice to this city for a “war summit” on the eve of the “fall of Baghdad” to American military forces. The choice of Belfast served a number of purposes. While 5,000 or so anti-war protesters were kept miles away from Hillsborough Castle just outside of Belfast, where the meeting was held, not holding the summit in London saved both Blair and Bush the embarrassment of being greeted by tens of thousands of people who don’t regard what happened in Iraq as a “triumph.”

But bringing Bush to Belfast was also crafted to allow him to impose his presidential imprimatur on the Northern Irish peace process and bask in the reflected light of an impending “final deal” that would put the Irish Republican Army out of business. The local Northern Irish Assembly was suspended last October over allegations of Sinn Fein and IRA political spying. At a short press conference, Bush suggested that the approach of the Good Friday Agreement, signed five years ago, could serve as a model for intractable conflicts elsewhere. With Blair looking on appreciatively, Bush stated that the progress in Northern Ireland was the “same vision we need to have in the Middle East.”

As choreographed events go, the White House and No. 10 were undoubtedly pleased. There were none of the triumphal gatherings that characterized President Bill Clinton’s three trips to Northern Ireland. However, difficult questions were kept to a minimum, “dissidents” were kept at a distance, and Blair could plausibly tell his own constituents he had “convinced” Bush that progress in the Israeli-Palestinian conflict was crucial for stability and justice in the Middle East.

But within days of Bush’s departure from Northern Ireland, the deal between contending parties was in shambles. The hoped-for scenario was that, after months of negotiations, the British and Irish governments would publish their “blueprint” for reform of Northern Ireland’s political, policing and social institutions. In return, the IRA would call an end to their war to drive the British from Northern Ireland and would engage in a significant act of arms decommissioning.

While the British and Irish governments were provided an advance view of the IRA language that was to follow publication of the blueprint, Blair and Irish Prime Minister Bertie Ahern concluded that the “clarity” of intentions of the IRA was not sufficient to move the process forward. At issue is the ability and willingness of David Trimble, leader of the Ulster Unionist Party, to convince his party leadership that the deal was worth accepting.

Only a small majority of the unionist community voted for the Good Friday Agreement when the cross-border referendum was held in 1998. And for five years, Trimble has been attacked as a traitor and sell-out by prominent members of his own party and by the rival Democratic Unionist Party (DUP). The DUP’s strategy has been to condemn Trimble’s involvement in the grimy business of compromise, while pocketing the political benefits. Blair and Ahern believe that Trimble’s political survival is necessary to keep “moderate” unionism from being overtaken by the anti-peace agreement DUP.

While the British and Irish press have universally condemned the IRA and Sinn Fein, Sinn Fein leader Gerry Adams has problems as well. At an annual commemoration of the 1916 Easter Uprising, Adams stated that many republicans already believe Sinn Fein has “gone too far” in its deal-making.

In addition, an effective and trusted police force is a fundamental aspect of any “normal” society. Some Catholic working-class areas of Northern Ireland have not seen a member of the police force in decades. The Royal Ulster Constabulary, the Protestant-dominated predecessor to the new policing service, was simply not trusted—and for good reason. Amid the crumbling peace process, the British government issued a report that directly implicated British and Northern Irish security forces in the murder of Catholics. The report concluded that British officers and army intelligence had helped loyalist paramilitaries target Catholics, including civil rights attorney Patrick Finucane, who was murdered in 1989. While the details of the collusion did not come as a surprise to republicans—the Finucane family has been campaigning for years for an independent investigation—the timing of the report reinforces Sinn Fein’s call for thorough reform.

Assembly elections are scheduled for May 29, when in all likelihood Sinn Fein and the intransigent DUP will emerge as the largest nationalist and unionist parties. It is an ironic twist that the playing out of democracy has created a dynamic few of the mandarins in the British and Irish governments foresaw.

As Bush is already discovering in Iraq, allowing people a democratic voice does not guarantee they will sing the tune you prefer. When Bush was in Belfast, he said it was time to focus on the “road map” for peace in the Middle East. Northern Ireland has little strategic significance for either the British or Americans. And Bush, unlike Clinton, does not see significant political capital to be gained by focusing his attention there. But with the peace process in disarray, an alternative “road map” needs to be established in Northern Ireland as well.