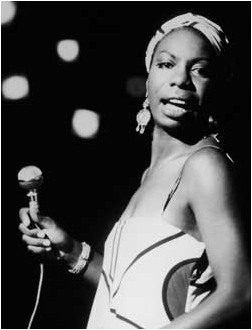 BY Jody Kolodzey
Share TweetReddit0 EmailPrint
At Nina Simone’s funeral on April 25 at the Catholic church in Carry-le-Rouet, France, the legendary South African singer Miriam Makeba referred to her as “not only a great artist, but also a freedom fighter.”

Simone, who had honorary degrees in music and humanities from the University of Massachusetts and Malcolm X University in Chicago, died April 21 at age 70 at her home in Carry-le-Rouet, near Marseille, after an extended battle with cancer.

She was born Eunice Kathleen Waymon in Tryon, North Carolina, on February 21, 1933, and grew up playing piano and accompanying gospel singers in the Methodist church where her mother served as minister. When she began her professional career in Atlantic City in 1954, she changed her name to hide what she was doing from her parents, selecting Nina, which means “little girl” in Spanish and was a boyfriend’s nickname for her, and Simone, out of admiration for the actress Simone Signoret. “I was forced into showbiz to make a living, and I’m still angry about it,” she later admitted.

Although best known as a jazz singer, Simone was a classically trained pianist (at the Julliard School; she claimed Philadelphia’s Curtis Institute of Music rejected her out of racism). She was extolled as the “High Priestess of Soul,” but she hated that term. She considered herself a folk singer “because there was more folk and blues than jazz in my playing,” as she observed in her 1991 autobiography, I Put a Spell on You. “Calling me a jazz singer was a way of ignoring my musical background, because I didn’t fit into white ideas of what a black performer should be.”

“All my life I’ve wanted to shout out my feeling of being imprisoned,” she said. She was a tireless champion of civil rights, and most of her original compositions—including “To Be Young, Gifted and Black,” “Old Jim Crow,” “Why? (The King of Love Is Dead),” “Backlash Blues” and “Mississippi Goddam”—addressed racism and the class system in the United States. She left the country in 1973, expressing disgust for the social climate. White Americans, she remarked, would “sell themselves, their souls, their brothers, sisters, and their mothers for money.” She did not return until more than a decade later, but then only for occasional tours or recording sessions.

Her activism did not always endear her to critics. One writer complained in The New Yorker that Simone had “become more interested in the message of her songs than in the singing of them.” But by the ’80s, Simone herself had apparently grown weary of being typecast: “I’m not about protest songs anymore,” she said at that time. “I want to perform with symphony orchestras and choirs. I want to play concertos.” She particularly detested comparisons to Billie Holiday, asserting, “They only compare me to her because we were both black. They never compared me to Maria Callas and I’m more of a diva like her than anybody else.”

In a 1998 interview, Simone said she had “paid a heavy price for fighting the establishment.” That same year, she was a special guest at Nelson Mandela’s 80th birthday celebration in Johannesburg, South Africa.

Among the eulogies read at her funeral was this message from the South African government: “Nina Simone was a part of our history. She fought for the liberation of black people. It is with much pain that we received the news of her death.”

Simone’s daughter, singer Lisa Celeste Stroud, played piano at the funeral. Stroud, who is known professionally as simply Simone, is currently appearing on Broadway as the lead in Aida.

“You want to know what my real hope is?” Nina Simone once pondered. “I hope the music will make you make love a little bit. Then you get back to the business in hand—politics.”