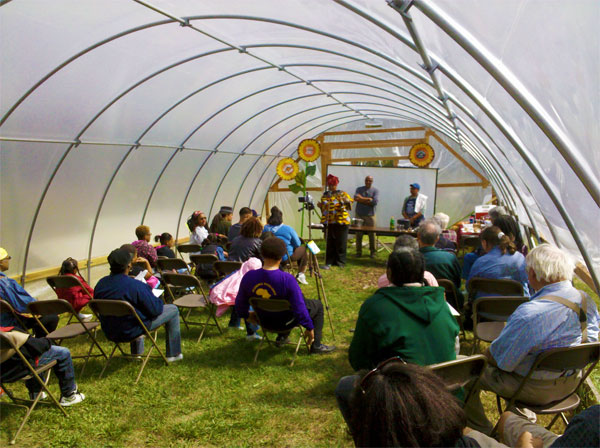 Behind the doom-and-gloom headlines, a collective response to the city’s problems is already happening.

Two citywide networks exemplify the grassroots' ability to do what the city, the corporate sector and philanthropic community cannot: create a vision for economic development that includes all Detroiters.

Detroiters are redefining “economy.” Throughout the 20th century, companies comprising Detroit’s industrial economy provided jobs to people who bought things and paid taxes to government, which provided services. In Detroit’s grassroots economy, which has evolved over many decades, people are creating their own jobs and exchanging local resources directly. Communities are solving basic economic and human problems collectively. At the same time, they are producing new knowledge and resources, restoring relationships across generations, and healing neighborhoods.

In contrast to community-driven efforts, last fall Mayor Dave Bing kicked off the Detroit Works Project (DWP) with a series of town hall meetings to discuss the city’s future. According to its website, the project is “an evolving roadmap designed to make Detroit work for you by creating a shared, achievable vision for our future.” The effort began with a series of town hall meetings that many residents felt were designed not to foster their participation but rather to mask the fact that the Detroit Works Project is led by urban renewal “experts” and philanthropic leaders unaccountable to community concerns and visions.

The town hall meetings produced a set of data that the DWP team says will instruct the city on how to proceed. Yes, citizens were given the chance to speak at the meetings, but overall the project’s strategy reduces Detroiters to numbers that get crunched and fed to a planning and development team, instead of fostering their participation in making Detroit “work.”

For all the attention it has raised, DWP isn’t the only current effort to solve some of the city’s problems. Dozens of networks of community organizers crisscross the city and have long been advancing solutions to community problems. These networks constitute a collective process of social transformation that encompasses education, food security, communications infrastructure, community safety and health, environmental justice, immigrant rights, arts and culture, and many other issues. An authentic Detroit Works Project would begin by listening to the visions and organizing models already functioning at the grassroots.

In particular, two citywide networks exemplify the grassroots’ ability to do what the city, the corporate sector and philanthropic community cannot: create a vision for economic development that includes all Detroiters, and organize to make that vision real. The Detroit Digital Justice Coalition (DDJC) and the Detroit Food Justice Task Force both formed out of visions for healthy communities, where all people not only have access to healthy food and media, but also have the ability to create and distribute their own food and media. (Full disclosure: Jenny Lee co-directs a member organization of the DDJC.)

These two networks are using food and media production as a means of social transformation. They are creating new economies that are increasingly inseparable from the health and self-determination of Detroit communities.

The DDJC formed after a strategy session at the 2009 Allied Media Conference, in which community media groups from around the country met to discuss the funding opportunities created by the 2009 American Recovery and Reinvestment Act’s Broadband Technology Opportunities Program (BTOP). Members of the Detroit organizations who attended the first meetings of the coalition that fall saw BTOP funding as a tremendous opportunity to actualize a vision for community media and technology in Detroit. But they quickly realized that their vision for digital justice went beyond the parameters of the federal stimulus grant. They made a commitment to work together to implement the vision whether or not they received funding from Washington. The DDJC turned the process of applying for the grant into a community-organizing process so that no matter what the outcome, the coalition could be successful.

But the DDJC’s collaborative, vision-driven grant-writing did yield a $2 million federal award in 2010. It is now in the process of launching a multi-layered program called the Detroit Media Economy Collaborative, which involves digital media training for trainers, teaching professional development, youth-led media cooperatives and the launch of 12 community media labs. In these labs, the DDJC will offer workshops on everything from computer literacy 101 to oral history radio production to media-based organizing for environmental justice.

DDJC is building the capacity of educators, community organizers, artists, technologists and small businesses to build a just and creative economy in Detroit. Its goal is not simply to give residents the ability to apply online for jobs at Wal-Mart. Instead, coalition programs will teach people how to use digital media to solve community problems; help the city’s emerging small businesses become sustainable; infuse digital media arts into schools; and change young people’s perception of Detroit to see it as a place of hope, not abandonment.

The Detroit Food Justice Task Force formed out of a need among farmers and environmental justice organizers in the city to network smaller, localized efforts and to assert a community-led vision for Detroit’s future, specifically with regard to urban agriculture. At the time of its formation in late 2009, national media were fixated on images of Detroit’s prairie-like open space.

Very few stories acknowledged the decades-long movement of urban farming or the fact that Detroit is home to more than 1,000 small farms and community gardens. Rather, national media portrayed Detroit as a “blank canvas.” As a result, Detroit has attracted people from near and far with bold urban agriculture proposals to supposedly save the city.

The most controversial of these proposals came from local businessman John Hantz, who wants to appropriate as much of Detroit’s vacant land as possible for commercial food production and agro-tourism, slotting Detroit’s “chronically unemployed” into menial farm labor jobs. The proposal, announced in spring 2009, stems from Hantz’s belief that “the majority of the city does not have community,” a remark he made at the Business of Urban Agriculture Summit last April. It is also grounded in an outdated view of economic health in which simply having a job is the end goal.

The FJTC offers a very different vision of urban agriculture in Detroit, a vision grounded in all the ways food production and food access in the city is about more than creating jobs. The network of food producers and distributors, culinary artists and environmental justice educators designed a strategic movement-building model for food justice that supports the city’s Food Policy Council–established to develop a food secure city–and the Food Security Policy for Detroit while bringing grassroots efforts to a larger scale.

Detroit’s Food Security Policy, adopted unanimously by City Council in March 2008, is concerned with access to quality food in Detroit, hunger and malnutrition, the impacts of an inadequate diet, citizen education, economic injustice in the food system, urban agriculture, and the role of schools, public institutions, and emergency response in creating food justice in Detroit. The Task Force is engaging hundreds of community members in programs that will put the policy into practice. Programs include the creation of food justice hubs in neighborhood centers throughout the city, constructive public dialogue to address racial inequities in the Detroit food system, and food literacy programs to educate community members about healthy food choices and culturally appropriate food preparation. It’s not just about better food, it’s about changing the conditions that makes good food so rare in Detroit.

There are many examples of small farms in Detroit distributing produce to local businesses. From his one acre farm in the North Corktown neighborhood, Greg Willerer runs Brother Nature Produce, a farm that sells food at local markets and distributes to a growing list of Detroit restaurants that prefer the taste and freshness of his greens to that of warehouse produce. “This is a way of decolonizing ourselves from the corporate food structure and doing something better at the same time,” Willerer explains.

In his first State of the City address in April 2010, Mayor Bing proposed to “right-size” Detroit by shutting off city services to portions. But most Detroiters have been living without many services, like street lights, snow removal, libraries, schools and rec centers, for years . Many of those who have survived the system’s failures have found solutions and built relationships that they couldn’t have dreamed of otherwise. In addition to food and media, there are local efforts to transform education, community safety, manufacturing and transportation – all of the basic structures of existence in the city.

Detroit’s grassroots economies revolve around much more than an exchange of goods and services. Whereas the watchword of the city’s (and country’s) established economy is “jobs,” Detroit’s new economies are grounded in “work.” For years, Grace Lee Boggs has been drawing out this distinction in her weekly columns in the Michigan Citizen, advocating for an economic development strategy that provides meaningful work in the process of creating our city anew, rather than jobs at companies which often leave as fast as they arrived.

Boggs says, “Until the emergence of capitalism a few hundred years ago, Jobs or Labor that you did for a paycheck did not exist. People worked to provide goods and services for their communities and to exercise and develop their skills. As we enter the 21st century, we are in the middle of a great transformation or reversal: from increasingly unavailable Jobs to meaningful Work.”

The deepening cuts in government services–long a fact of life in Detroit, but now increasingly the case for towns, cities and states across the country–force us to confront the reversal Boggs describes. In the coming months, we will see the culmination of two contrasting visions playing out in Detroit: One, top-down and led by Mayor Bing and big foundations, will attempt to relocate residents and attract new corporate investment. The other, led by long-time Detroiters, will attempt to build a new economy with the resources and relationships that have survived the rough decades of Detroit’s recent past.

How we define Detroit’s economy will determine whether our work only provides for basic survival needs, or allows us to be active participants in the narrative of our present and future.

Jenny Lee is a co-director of Allied Media Projects, which is a member of the Detroit Digital Justice Coalition and the Detroit Summer Collective.