Protestors block an intersection outside of Illinois' Broadview Detention Center as part of a nation-wide call to stop deportations.
(Alexandra Fryer)

Crying “not one more,” Chicago-area undocumented immigrants and their allies instigated a human blockade of the Broadview Detention Center in Broadview Ill., earlier today as part of a national call to action to end deportations. Eleven activists were arrested for their participation in the act of civil disobedience that halted traffic at the intersection of Roosevelt Road and 25th Avenue outside of the immigrant detention center.

The immigration statuses of the 11 arrestees are still unknown. 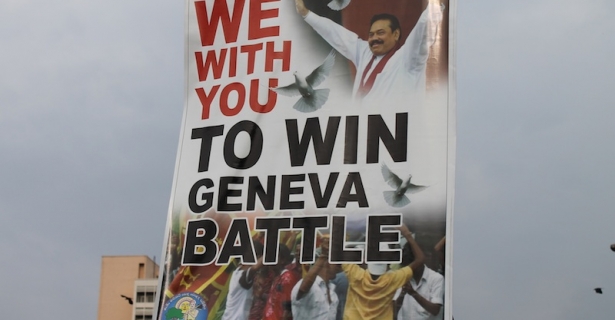 President Rajapaksa has denounced the imminent UN investigation as a product of "foreign elements," which could stir up a nationalistic sentiment among his substantial Sinhalese support.
Vikalpa/Groundviews/CPA / Flickr / Creative Commons.

But during the last few months, a third topic has popped up on Google News: the fate of a U.S.-sponsored resolution in the UN Human Rights Council (UNHRC) calling for "a comprehensive investigation into alleged serious violations of human rights and related crimes by both parties" during the final years of Sri Lanka's long civil war, which after more than 25 years, came to a decisive and brutal conclusion in 2009. In May of that year, following a deficit-fueled military build-up and 18 months of fighting, the government annihilated the armed rebels of the Liberation Tigers of Tamil Eelam. Since the 1980s, the Tigers had sought to carve out a separate state for the ethnic, religious and linguistic minority Tamils in northern Sri Lanka, largely through the use of violence.

On Thursday, despite intense lobbying by the Sri Lankan government against the resolution, the 47-member UNHRC approved the resolution, which calls for an international criminal probe. It's a major victory for both human rights advocates and for the UN itself, which is trying to repair its credibility on the Sri Lankan civil war after UN officials remained silent while abuses were occurring in 2009. (In December 2013, it passed a "rights up front" policy requiring UN officials to immediately reports human rights violations, partly as a result of its failure to clearly speak out in 2009.

But coming years after the war's end and the initial reports of atrocities, it's unlikely that soldiers, generals and the politicians who pushed them into action will be held accountable any time soon. Thursday's vote was a milestone, but it doesn't guarantee anyone will be brought to justice, And it certainly doesn't bring the war's two sides—the Sinhalese-dominated government, and the minority Tamil population who reside mostly in the island's north—any closer to reconciliation. Indeed, it may do the opposite.

In These Times Remembers Ron Dorfman 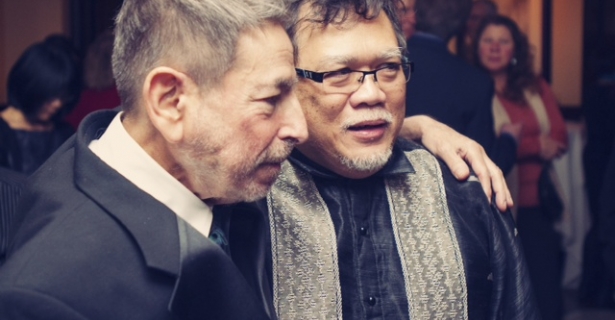 Ron Dorfman, a Chicago journalist and secretary of the In These Times Board of Directors, who died on February 10, spent his final months doing what he had done for most of his life: He fought for a worthy cause as he maintained a wry, good-humored perspective on the complex turns of injustices in the world.

Dorfman’s work as a journalist—reporter, editor and journalism watchdog—was fair-minded and impeccably professional. But it also grew out of his political views, including personal support for movements promoting civil rights, civil liberties, unionization of workers, an end to the Vietnam War and gay rights.

Radical Justice and Radical Jesus, Coming to a Comic Book Store Near You 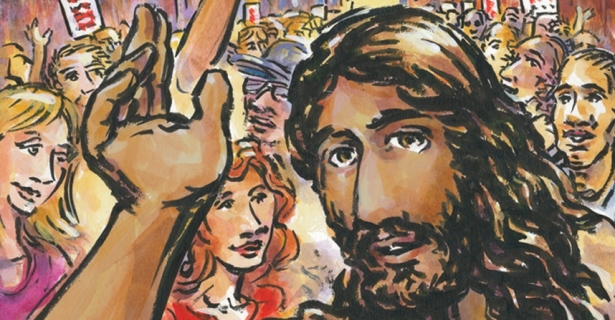 A comic book might be the last place you'd expect to find Jesus. But a recent book edited by Paul Buhle provides just that opportunity, albeit not the Jesus you'd recognize from right-wing Christian depictions. Using vivid imagery and lively storytelling, Radical Jesus: A Graphic History of Faith rediscovers Jesus as a radical leftist thinker. The authors and artists trace the long history of change-makers inspired by Jesus' teachings of peace, justice and equality, moving from biblical times to the 16th-century Radical Reformation to modern-day movements like civil rights.

The excerpt below, written by Dave Wagner and illustrated by Gary and Laura Dumm, recounts the fleeting peace forged by Pennsylvania Quakers and the Delaware tribe in the 17th century. Although the peace eventually disintegrated, Radical Jesus paints a rare picture of a diverse society based on mutual respect and interdependence. 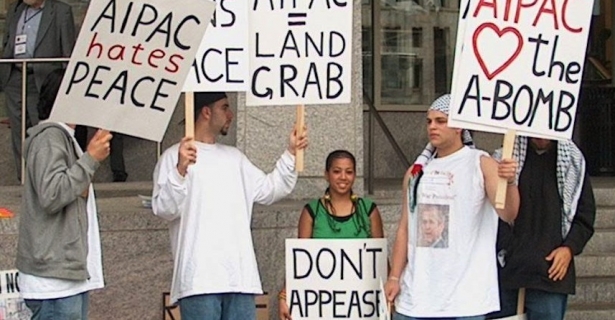 A poll released last week suggests that the power of the American Israel Public Affairs Committee (AIPAC), the American pro-Israel lobbying group, could be on the wane in Washington.

In the past, AIPAC has been so successful at garnering the support of politicians and passing pro-Israel legislation that in 1998 and 1999 Fortune Magazine named it the second-most-powerful group in Washington. AIPAC still runs an extensive lobbying operation; it spent $2.2 million on lobbying in 2013 and frequently sends lawmakers on expensive trips to Israel.

The global civic network Avaaz and Zogby Analytics conducted the poll of 165 DC insiders, including congressional staffers, leaders of NGOs and think tanks, leaders in the federal government, and members of the DC media. By a margin of 3 to 1, respondents thought AIPAC should have less influence over politics, rather than more. And 30 percent of those who had an opinion believed AIPAC's influence is indeed falling, compared to 47 percent who think it's staying the same and 23 percent who think it's rising.

No More Nice Gays: The Trouble with the Good Gay Parent Argument 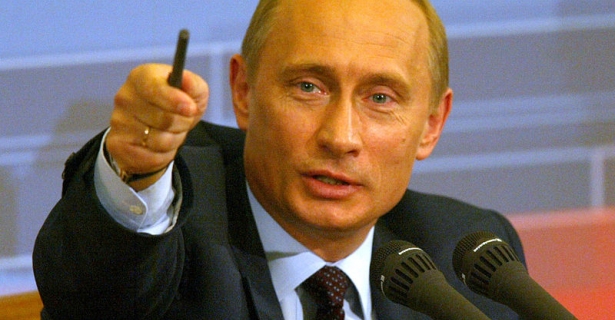 On the heels of Vladimir Putin’s Olympic proclamation that (foreign) gays will be welcome in Russia as long as they leave the kids alone, America’s homegrown anti-gay coalition is headed to the courts to unfurl their “scientifically-endorsed” gays are bad for children banner. A challenge to Michigan’s constitutional ban on gay marriage started last week and "the kids" are center court. 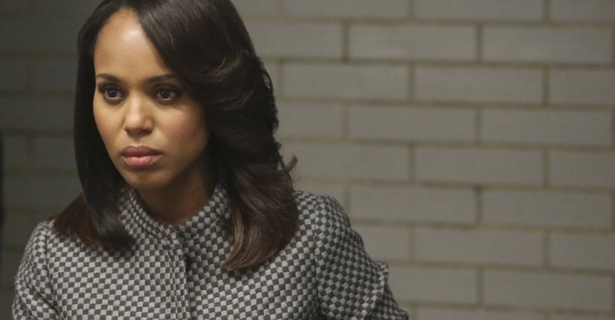 There is no question that Shonda Rhimes—the first African-American woman to create and executive produce a top 10 network series (Grey’s Anatomy)—is a trailblazer when it comes to diversity on television. Her use of colorblind casting brought us a hospital drama in which half of the doctors are played by minorities (Grey’s Anatomy) and a rare series with an African-American female lead (Scandal).

Rhimes has also received acclaim for her portrayal of bold and powerful women. And indeed, on the surface, the women of Grey’s and Scandal are intelligent, successful, ambitious and career-oriented. But scratch that surface, and the female characters in Scandal fall short of Rhimes' successful depiction of empowered women in Grey’s.

The differences manifest in the way the characters manage their personal lives. In Grey’s, the female characters are independent and powerful in every sphere of their lives: They are passionate, but not blinded by their passion, and most importantly, they refuse to compromise their values and integrity for anyone who isn’t willing to do the same for them. For instance, when surgeon Miranda Bailey (Chandra Wilson) was told by her husband that she had to decide between a prestigious pediatric fellowship and their marriage, it took Bailey no time to pick the fellowship, “cause a marriage that results to ultimatums, it’s not a marriage.”

By contrast, Rhimes’ female characters in Scandal behave in ways that contradict the strength and independence they strive to embody. They show a willingness to take emotional abuse and they keep getting burned in the same ways, failing to learn from their mistakes. Susceptible to manipulation, they often compromise their ambitions and standards for undeserving people. Despite this stark departure from her previous model, Rhimes has managed to receive often-uncritical praise from media and fans alike, who have embraced Scandal as a source of female empowerment.

Do Federal Prosecutors Have a Vested Interest in Blocking Sentencing Reform? 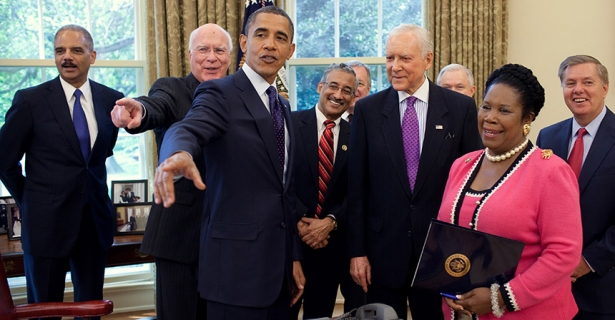 In the years since mandatory minimum sentences were put in place by the Anti-Drug Abuse Act of 1986, they’ve been roundly criticized for imposing upon nonviolent, low-level drug offenders sentences that are, as one federal judge put it, “so excessively severe they take your breath away.”

Such steep sentences are not only draconian, they also place undue pressure on defendants to forgo their right to a trial in favor of a more reasonable plea bargain. Mandatory minimums have also been criticized for disproportionally burdening people of color due to disparities in when, how and against whom they are employed.

After three decades, a push to reform these unfair practices is finally gaining traction. In August, U.S. Attorney General Eric Holder announced that the Department of Justice (DOJ) would no longer pursue mandatory minimum sentences for certain nonviolent and low-level drug offenders. “We cannot simply prosecute or incarcerate our way to becoming a safer nation,” he said.

The Day We Fought Back: Across the Nation, Privacy Advocates Protest NSA Surveillance 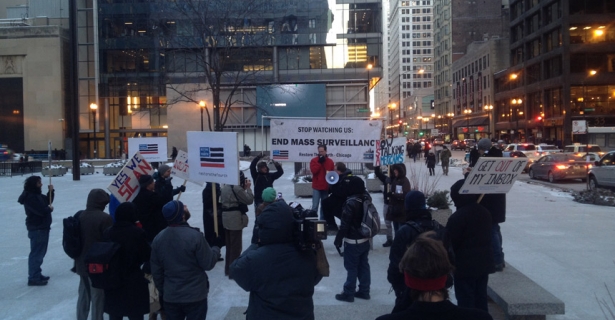 In an increasingly digital world, both government surveillance and the activism against it tend to happen primarily on the Internet. But Michael Paus thinks Americans still need to show up on the streets to take action. Paus is an organizer with Restore the Fourth Chicago, a chapter of a national non-partisan organization that works to end unconstitutional surveillance.

“We just want to show, on the streets of Chicago, an actual physical presence of what’s going on,” Paus told In These Times at a Tuesday evening rally and march against mass surveillance that drew dozens of people to the city’s Richard Daley Plaza. Paus believes that concerned individuals need to assert their right to assemble because the NSA’s metadata collection threatens the First Amendment, in addition to the Fourth Amendment. “We’re doing this without a permit. We’re just showing up here and we’re asserting those rights,” he said of Tuesday’s action.

Tuesday's march in Chicago took aim at NSA surveillance as part of an international day of action called The Day We Fight Back. Over the course of the day, 6,000 websites—including Reddit, Tumblr, Upworthy, and Mozilla—hosted a banner urging users to contact their legislators and demand that they limit, rather than legalize, the NSA’s surveillance. Events were scheduled in cities around the world, from Bogota, Colombia to Bluffdale, Utah.

Open Letter From NY Jews to Mayor de Blasio: `AIPAC Does Not Speak For Us’ 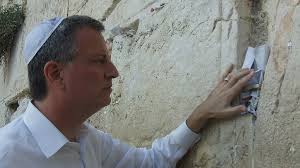 We are Jewish residents of New York who read, in the leaked transcript of your private speech to a meeting of AIPAC leaders, the following:

City Hall will always be open to AIPAC. When you need me to stand by you in Washington or anywhere, I will answer the call and I'll answer it happily 'cause that's my job.

We understand that the job of mayor of New York is a complex one that often calls for your participation on the international stage, and we would not presume to define your job for you. But we do know that the needs and concerns of many of your constituents—U.S. Jews like us among them—are not aligned with those of AIPAC, and that no, your job is not to do AIPAC's bidding when they call you to do so. AIPAC speaks for Israel's hard-line government and its right-wing supporters, and for them alone; it does not speak for us.