The Occupied Chicago Tribune: Chicago’s Voice for a Global Opening 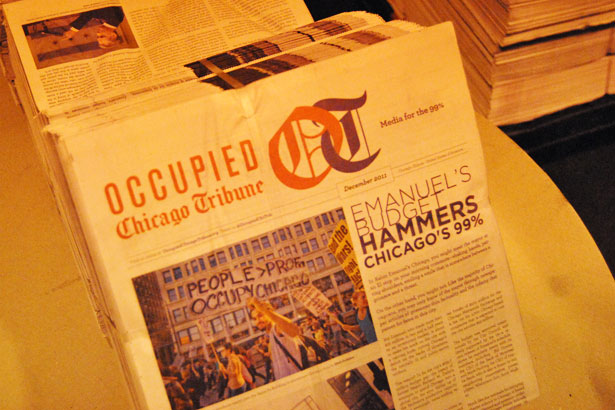 Hot off the presses: The first issue of the Occupied Chicago Tribune.

On a cold and windy November evening in downtown Chicago, more than a dozen people—activists (including myself), journalists, designers and Occupiers—gathered outside of the Occupy Chicago General Assembly to discuss the seed that would germinate into the Occupied Chicago Tribune. As protests and acts of resistance fan out across the globe, creating an opening for imagining and developing a more equitable and truly democratic society, we were compelled to create a newspaper that would speak to the unique issues Chicagoans face under the city’s current economic and political systems, as well as give voice to and spread the message of the Occupy movement.

This week, the Occupied Chicago Tribune officially came to life. The first issue, printed Wednesday evening, will be distributed throughout the city—far beyond the Loop's financial district, where Occupy protests have been held since late September—in the coming days. It includes a feature on Mayor Rahm Emanuel’s budget cuts and their effects on Chicago’s poor, an interview with two seniors arrested protesting social service cuts, a timeline of the global Occupy movement, a look into why hundreds of thousands of people are moving their money out of predatory banks, commentary on the Occupy movement from Naomi Klein and Chris Hedges and more.

Similar publications to the Occupied Chicago Tribune are springing up across the country, including the Boston Occupier, Occupied Washington Times, and the soon-to-be-published Occupied Providence Journal.

As winter sets in and more Occupations transform their tactics while being evicted from their encampments, the role of independent media sources dedicated to honestly reporting on and informing the Occupy movement will be increasingly important. We are extremely excited for the part this newspaper can play in helping to advance the goals of the Occupation: Now is the time for a new kind of politics that puts the priorities of ordinary people above those of big business.

Below is the newspaper's first editorial. This and other stories can be read at the Occupied Chicago Tribune website.

The whole world watched as the Arab Spring toppled dictators and gave voice and representation to millions willing to risk their lives for freedom. Now we see the dominos topple throughout Europe, which is facing the greatest financial crisis since the formal establishment of the EU. Massive public outrage and protest have gripped countries from Greece and Spain to England over government-imposed austerity programs and the capitalist system pushing them through.

This past September, the struggle came home. The Occupy Wall Street movement has spread like wildfire throughout the United States, here to Chicago and across the globe. It targets unchecked corporate power, brings together disparate communities of the 99% and organizes horizontally to create a more equal society.

The Occupied Chicago Tribune is an independent media source for those who do not see their struggles and views represented in the mainstream press. We created this paper to provide an outlet for reporting, commentary and analysis on the growing Occupy movement, its unique application in our city and the struggles of the 99%. Buoyed by the protests around the world and frustrated by popular news sources’ representation of the movement, we are dedicated to honest coverage aimed at spreading the message of, and informing, the Occupy movement.

In Chicago, inequality is skyrocketing. It can be seen everywhere, from homeless youth sleeping outside of million-dollar condos to tourists shepherded through Hyde Park to explore “President Obama’s Chicago,” conveniently avoiding the poverty-stricken neighborhoods that are in need of the most attention and economic support. Based on UN measurements, the gap between rich and poor in Chicago is far greater than the national average, and even greater than that of Egypt under Mubarak’s regime.

And Mayor Emanuel’s response? To attack workers and social-welfare programs while shoring up investments for next May’s meeting of the world’s most powerful bankers and war profiteers at the G8/NATO summits. The concepts of equality, fairness, human rights and justice have been eclipsed by terms like “market competitiveness” and “shared sacrifice.” It is no coincidence that corporate profits soar along with poverty rates. These deliberate injustices reflect the backwards priorities of our government.

Occupy Chicago is part of a global nonviolent movement dedicated to fighting this corporate abuse of democracy and to putting the needs of people before the pursuit of profit. And the movement is growing. The calls for a more equitable distribution of wealth and less corrupted government have already begun to seep into mainstream news outlets’ coverage. Unfortunately, the same corporate interests whose greed is directly targeted by the Occupy movement control those outlets.

As most Chicagoans continue to face worsening economic conditions and cruel cuts by the city government to social services, the Occupied Chicago Tribune will report honestly on how these developments directly affect people’s lives, and on the ways in which we can all resist and fight back to create a more equal city and a better world.