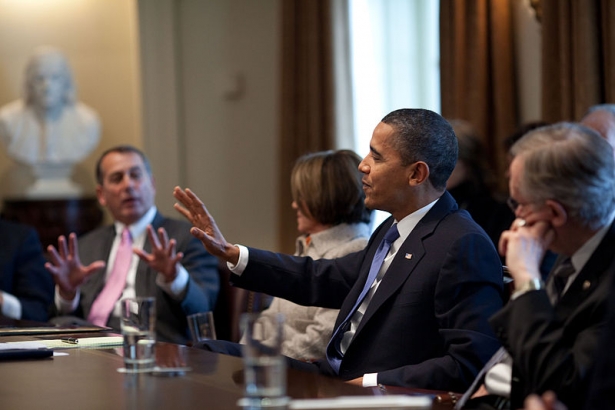 At the February 2010 bipartisan Congressional leadership meeting, the president said that a debt and deficit deal was "going to take a lot of work." That was an understatement. (The White House/Wikimedia Commons)

In a phone conference with President Obama on Friday, Speaker John Boehner finally agreed to entertain some tax increases.

The concession marks the first time Boehner has put tax increases for any income group on the table during negotiations over the so‐called “fiscal cliff.” The deal would raise taxes on earners with an “annual incomes of $1 million or more annually, beginning Jan. 1,” according to Politico.

In return, Democrats would have to agree to steep cuts to benefit programs such as Medicare. Politico explains:

Boehner also wants to use a new method of calculating benefits for entitlement programs known as “chained CPI,” which would slow the growth of Medicare and other federal health programs and save hundreds of billions over the next decade.

Although Boehner has relented on his total refusal to make any meaningful compromise, his offer isn’t being seen as a major win for the Democrats and Obama. The president rejected the proposal on the grounds that it would not raise the revenue needed to offset record debt.

Think Progress called the plan a “bad deal,” noting that, come January 1, taxes on millionaires will revert to their Clinton‐era levels, without the Democrats having to sacrifice anything. Think Progress also argues that shifting the line up to $1 million in income from $250,000 will cost the government money, quoting Citizens for Tax Justice: “Extending the Bush tax cuts for the first $1 million of a family’s income saves 43 percent less revenue than the savings estimated with a $250,000 threshold.”

Boehner's offer does not include an extension of unemployment insurance, nor any plan to boost the economy.