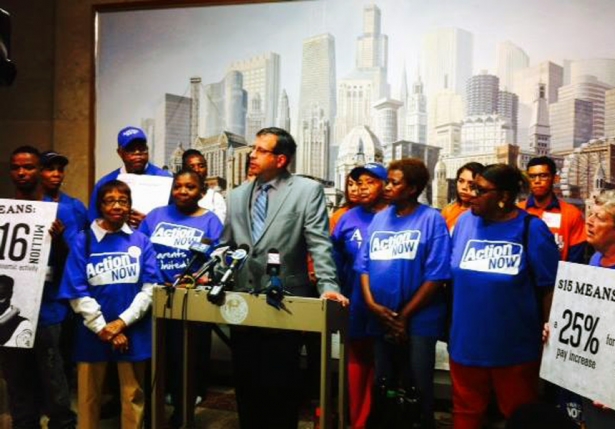 Irma Díaz, 36, has been working at McDonald's for 14 years. She’s also a single mother of a 14-year-old son. If she’s lucky, she gets to work 35 hours every two weeks.

She’s never been paid above the minimum wage.

Díaz is just one of the estimated 400,000 Chicagoans who would benefit from the hike recently proposed by Chicago’s Minimum Wage Working Group (MWWG). On Monday, July 7, the task force—hand-picked by Mayor Rahm Emanuel and composed of eight alderpersons, along with the leaders of the city’s top commercial and labor organizations—recommended raising Chicago’s minimum wage to $13 an hour by 2018, followed by future increases tied to the rate of inflation. Tipped employees, such as servers, would also see a one-dollar bump in their pay over the next two years.

The group also suggested that the Chicago City Council delay voting on the issue until lawmakers decide whether or not to raise the Illinois minimum wage, which should happen after the November elections.

Though the MWWG predicted that the move would inject $800 million into Chicago’s economy over the next four years, many business leaders in the area have denounced the idea. They fear that paying employees more would motivate companies to leave the city and set up shop in the surrounding suburban communities; they also claim it would force the remaining businesses to raise their prices, rendering them vulnerable to their newly out-of-town competitors.

However, according to economists at the University of California, Berkeley, who studied nine cities around the country that increased their minimum wages between 2001 and 2011, “an increase up to $13 an hour has no measurable effect on employment.”

For that matter, some workers say that the MWWG’s proposed hike is both too paltry and too lengthy to be effective.

“$13 [an hour] would be nice, but it’s just not enough,” Díaz says in an interview with In These Times. “If you take into account all of our expenses, it’s just too little. We, the workers, really can’t wait for $13 by 2018. We’re living in a bad economy right now, and I can only imagine how bad things are going to be by 2018. We need to raise it now.”

Díaz is a member of the Workers Organizing Committee of Chicago (WOCC). Formed in 2012, the WOCC is a group of fast-food and retail workers that is demanding that the minimum wage be raised to $15 an hour.

On Tuesday, the WOCC released a statement in regards to the mayor’s $13-an-hour proposal. “Any recommendation that is less than $15 is an insult to the hundreds of fast-food workers that have risked their jobs and made sacrifices for the well-being of this city,” it reads. Chicago fast-food workers, it continues, “will not sit back and wait for politicians to act,” with the group committing to fight for a $15 minimum wage.

According to the MIT’s “Living Wage Calculator,” an adult with one child needs to make $20.86 an hour working full time in Chicago in order to afford basic necessities such as food, medical expenses, and housing—a fact of which Díaz, who makes ends meet by selling beauty products on the side, is well aware.

“Even $15 isn’t enough to provide for our needs,” Díaz says, “But it would make our lives much easier.”

Plus, as Díaz points out, improving pay is just the beginning: Being able to form a union is just as important to her as raising the minimum wage.

“$15 would be better, but that wouldn’t prevent our bosses from cutting our hours and making it harder for us to make a living,” she says. “That's why we need a union.”

WOCC also advocates for workers’ right to join unions, and Díaz suspects that her workplace outspokenness and organizing has made her a target for retribution from employers.

“It’s rumored that I’m in the crosshairs since we’ve begun to talk about unionizing and such,” she says.

But Díaz doesn’t plan on giving up anytime soon.

“I’m not going to let the 14 years I’ve been working there go to waste,” she says. “I know I have rights and I know I am fighting for my rights. My coworkers give me positive feedback, and they tell me that they feel stronger because of me. I can only imagine how strong a union would make us all feel.”