Protesters Say No to Rauner: ‘People Make a Difference and People Should Come First’ 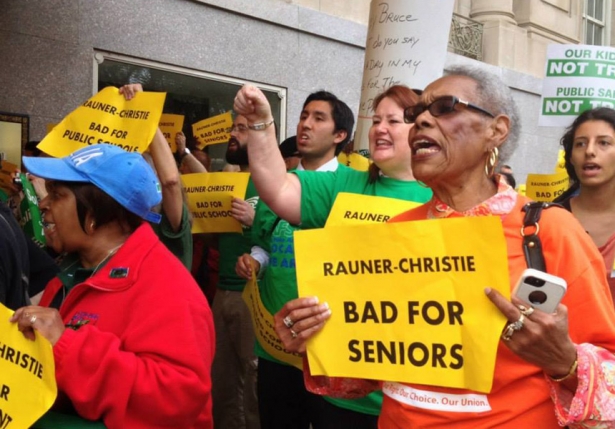 Many Illinoisans are concerned that gubernatorial candidate Bruce Rauner is trying to 'redistribute wealth upwards,' and will make the state's inequality gap even wider if elected. (Citizen Action Illinois)

As head of the Republican Governors Association (RGA), New Jersey Gov. Chris Christie (R-N.J.) traveled to Chicago on Friday to meet Republican candidate Bruce Rauner for an exclusive fundraiser. The event, hosted at the Hilton Hotel, was a lucrative affair, with tickets starting at $500 for the general reception.

“This is amongst the most important governor’s races in the country,” said Christie, who promised another $2.5 million “down payment” in campaign donations before the trip was over. In the meantime, Rauner, whose net worth approaches $1 billion, has already broken Illinois records for personal campaign contributions, having invested $6.05 million thus far.

But as the two GOP politicians met with wealthy donors to procure funds, dozens of protesters gathered Friday evening outside the hotel to voice concerns over Christie and Rauner’s “moderate GOP” platforms, which they claimed are out of step with mainstream Illinois voters.

“Both of these politicians pose as moderates, while backing extreme positions on both social and economic pocketbook issues,” says William McNary, co-director of Citizen Action Illinois. “They may be moderate in Mississippi,” he continued, “ but they are not moderate here in Illinois.”

“This is a historic coalition to put together because it merges the groups that really care about social issues with the folks that work on pocketbook issues,” said Lynda DeLaforgue, co-director of Citizen Action Illinois. “These are issues that voters care about; issues that will affect their decisions at the polls. So it is crucial that voters know where these candidates stand on these issues.”

Among the protesters was Dulce Leyva, a full-time student who works at Alivio Medical Center. Leyva, a single mother who makes just over the minimum wage, commented that Bruce Rauner, who raked in an estimated $53 million last year—more than $1 million per week—is unable to relate with Illinois’ working people.

“Rauner has actually shared that he wants to decrease the minimum wage to $7.25,” Leyva continues, referring to comments Rauner made on air in January.  “That would only make our conditions worse.”

While Rauner has since backtracked on his proposition to decrease the minimum wage, now claiming that he would advocate a minimum wage hike once certain business and tax reforms are enacted, his pro-corporate economic vision disturbs progressive voters.

“He’s just trying to redistribute wealth upwards,” says protester Jason Lee, who works with teachers’ unions in Boston. “He wants to lower taxes on the rich and meanwhile nickel-and-dime everyone else with a number of different fees.”

“Bruce Rauner says he would have vetoed marriage equality if he were governor in Illinois, and Chris Christie actually vetoed marriage equality as governor of New Jersey,” Locin says. “While  Rauner says he does not have a social agenda, that is a social agenda. … It would threaten to veto marriages that have already brought happiness for thousands and thousands of couples in Illinois.”

Locin points out that Rauner and his wife have donated significantly to anti-LGBT candidates this year.

Garret Evans, a Chicago native who survived the 2007 Virginia Tech massacre, criticized Rauner and Christie for their lax positions on gun control. In particular, Evans, who was shot with an assault rifle, denounced Rauner’s continued defense of assault weapons, the type of gun used in the Virginia Tech shootings.

“What do we really need [these guns] for?” asks Evans.

Rauner has also come under fire from the Chicago Teachers Union for supporting the expansion of charter schools and jeopardizing the rights of unions throughout the state.

“It’s clear as a bell to us that Bruce Rauner is simply no friend of Chicago public schools,” says Patricia Boughton, a representative for the CTU. Boughton also claims that Rauner fails to support issues like teacher tenure, which ensure a teacher’s right to due process, and refuses to back a “fair tax structure” to finance education.

This isn’t the first time Rauner has found himself mired in controversy for his dealings with education policy. In 2008, Rauner was scrutinized for reportedly using his clout to get his daughter into Walter Payton, a top-ranked public high school in Chicago’s North Side. After initially being rejected admission, Rauner’s daughter was accepted to the school once Rauner contacted Arne Duncan, then-CEO of Chicago Public Schools. More than a year later, Rauner donated $250,000 to the Payton Prep Initiative for Education and $500,000 to the Chicago Public Schools Foundation, the Chicago Sun-Times reports.

To people like Boughton, this reveals a level of hypocrisy in Rauner’s education agenda.

“Mr. Rauner supports charter schools. He has set up several, he has donated to many of them,” says Boughton. “But when it came time for his own child to go to a school, he chose a unionized public school.”

“What’s good for the goose is good for the gander,” adds Lee. “If [charter schools] are truly the best solution, make sure your kids are there first.”

While public opinion surveys reveal that the majority of Illinoisans disagree with Rauner’s conservative positions, he has managed to secure a considerable advantage in the polls, with a recent poll by We Ask America/Capitol Fax putting him up by 12 points over incumbent Governor Pat Quinn (D-Ill).

Still, many progressive activists are confident that they can challenge Rauner’s bid come election time, even if Rauner outspends his competitors.

“There have certainly been self-funders in the past that have spent a lot of money and failed,” says DeLaforgue, “So we’re not gonna get caught up in the dollar sign. As we say, Illinois is not for sale.”

“For those of us who care about economic and social justice,” she continues, “it is important that we get the message out to our base, especially ‘infrequent’ voters who are less likely to come out for a midterm election. That’ll be critical for this election.”

Katie Jordan is a retired member of Workers United who works on senior issues across the country. “We need to send him back to the big corporations and let him stay there,” she says. “People make a difference and people should come first. Illinois needs a governor that takes seriously the job of helping Illinois’s most vulnerable residents.”

Stephen Quillenis a Summer 2014 intern at In These Times.